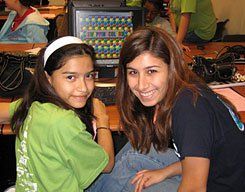 Two teenage girls hold up a poster bearing the words "Which is the animal?" in bold letters. Beneath the question, photographs depict a mouse, a chick, a rabbit, and a rat. Strangers stare at the sign with a mix of curiosity and confusion as the girls approach them inside a dormitory elevator near the University of Texas at Austin. "Aren't they all animals?" someone asks. "They are all animals," another responds with conviction. And that's exactly the girls' point.

These reactions later became part of a public-service announcement made by first-year participants in Project IT Girl, an after-school program that strives to boost female high school students' confidence and competence in science, technology, engineering, and math (STEM). Five girls, including the two featured in the video, developed the two-minute spot to introduce their community to an amendment to the federal Animal Welfare Act, which excludes several creatures popular in lab research from being defined as animals, thereby denying them the standards of humane care, handling, and treatment animals now receive.

"The video disproves the idea that teenagers don't care about anything and are lethargic and lazy," says Zakiyyah Kareem, project manager of Project IT Girl. "When you invest time and energy and give them the resources to do things they care about, they produce quality work." 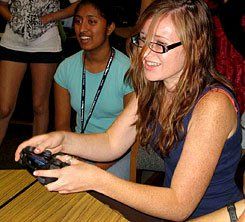 A Texas nonprofit organization called Girlstart began Project IT Girl in 2006 when it received an $898,976 grant from the National Science Foundation to use collaborative technology and science-intensive projects to interest young women in STEM careers. Prospective participants, who must be in grades 10-12 at Austin high schools, are required to submit a written application, an essay, and letters of recommendation. Once accepted, students commit to meet after school once a week, on Saturdays once a month, and for a week during the summer. The program's signature mix of teamwork, information technology, and real-world problem solving keeps its nearly fifty inaugural participants engaged.

Alexi Ramsey, a senior at Lake Travis High School who served as the cinematographer, sound editor, and film editor of the animal rights video, says she enjoyed the project because it was self-directed. "I felt like we were making an impact on our community by exploring the things that we thought were important," she says.

Her team researched animal rights issues and talked with professionals in the field to deepen their understanding of the law and its implications. They brainstormed ideas for presenting key information to citizens, and they spent an intense week at UT Austin researching, scripting, filming, and producing the public-service announcement. IT Girl productions screened the animal rights video -- and others on topics ranging from the HIV/AIDS epidemic to teen suicide -- for parents, faculty, and community members at the university. (View the videos on the IT Girl Web site.)

Although it's too soon to know which professions the girls will ultimately pursue, participants say the program introduced them to an array of college and career opportunities they hadn't considered before.

That's good news for Girlstart, which strives to bring gender balance to the ranks of information technology, a field in which women account for only 12 percent of IT strategists, 16 percent of software developers, and 20 percent of IT managers. "Our model puts an emphasis on creating a safe environment where girls can experiment, play, make mistakes, and learn from them and grow," Kareem says. "I hope that the girls will be able to keep that sense of camaraderie when they are in a traditional coed learning environment or when they are tackling something challenging."

Numerous theories exist about why girls often lose confidence and interest in math and science during their secondary school years. Among them are teacher attitudes, puberty, and peer pressure. Whatever the cause, girls' enrollment in the highest levels of science and math courses tends to drop as they get older. "In middle school, you start to see this shift of girls struggling more and their interest waning, and at the college level and at the career level, you look around and ask, 'Where are all the ladies in engineering and tech?'" Kareem notes.

Some IT Girl participants confess that they sometimes downplay their computer science aptitude to avoid being labeled strange or nerdy by other teens. Valerie Carrizales, a Crockett High School senior, says the pressure to fit in is extraordinary. "I think that as people get older, they start to care about what others think about them, or they change to fit in, or they hide who they are," she explains.

Leah Yousefi, a senior at Westwood High School, rarely expresses her interest in computer science outside of IT Girls, she says, because most of her peers wouldn't understand it. Her father, an engineer, encouraged her to participate in the program because she had read several of his HTML books at an early age and had taken all of the computer design and graphics courses at her high school. "A lot of my friends at school aren't into things like that, so I don't bring it up," she says. "When people ask what I'm interested in, I say tennis." In her peer group, being athletic is cool for girls, but being into computer programming is not.

In the second year of the program, the same group of girls tried their hand at video game production, blogging, and virtual reality, developing educational games for younger children around the world using Python, an object-oriented programming language. In addition to learning computer-coding skills, the girls found out how to storyboard their ideas and create custom computer graphics.

Over the summer, they produced exhibits for a real-time virtual event they held in Teen Second Life. Now seniors, the girls are using their ninety-minute weekly sessions and Saturday meetings to prepare for college by writing résumés, completing applications, and creating online portfolios of their accomplishments.

As Ramsey puts it, "They aren't just teaching us IT stuff. They are also teaching us about future goals and setting us up to be where we want to be in the future."