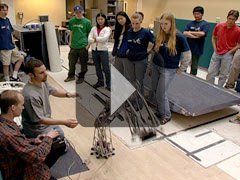 Ask Seymour Papert, renowned expert on children and computing, why students are turned off by school, and he quickly offers an example:

"We teach numbers, then algebra, then calculus, then physics. Wrong!" exclaims the Massachusetts Institute of Technology mathematician, a pioneer in artificial intelligence. "Start with engineering, and from that abstract out physics, and from that abstract out ideas of calculus, and eventually separate off pure mathematics. So much better to have the first-grade kid or kindergarten kid doing engineering and leave it to the older ones to do pure mathematics than to do it the other way around."

In a growing number of schools, educators are echoing Papert's assertion that engaging students by starting with the concrete and solving hands-on, real-world problems is a great motivator. Ultimately, they say, such project-based learning that freely crosses disciplines provides an education superior to the traditional "algebra at age nine, Civil War at ten, Great Expectations at eleven" structure.

Advocates also say that the availability of technology that can call up the knowledge of the world's best thinkers with the click of a mouse, that can graph in two seconds what once took hours, and that can put scientific instrumentation in a pocket-sized computer further argues for moving away from century-old models of instruction.

"Everybody is motivated by challenge and solving problems, and we don't make use of that in schools enough," says Bruce Alberts, Professor Emeritus at the University of California, San Francisco, and former president of the National Academy of Sciences (NAS). "Project-based learning gives everybody a chance to sort of mimic what scientists do, and that's exciting. And it's fun if it's done well."

Examples of projects applicable to the here and now abound:

In project-based learning, students try to answer a question -- one that has relevance for them -- that is greater than the immediate task at hand. In its publication Connecting the Bits, the NEA Foundation gives the example of students at a Kentucky elementary school conducting surveys, doing research, building models, and taking field trips with the goal of determining the best kind of new bridge to build over the Ohio River.

Students conduct research using a variety of sources, from the Internet to interviews with experts. They work on the project over an extended period of time -- six weeks or more -- because of the in-depth nature of the investigation. Like adults trying to solve a problem, they don't restrict themselves to one discipline but rather delve into math, literature, history, science -- whatever is appropriate to the study.

"One of the major advantages of project work is that it makes school more like real life," says Sylvia Chard, Professor Emeritus of Elementary Education at the University of Alberta and coauthor of Engaging Children's Minds: The Project Approach, a popular book for teachers of young children on learning through projects.

Chard doesn't like the term "project-based learning," because she says it implies a focus on projects to the exclusion of other legitimate learning methods; she prefers "project learning." "Younger children will play and explore as well as engage in projects," according to a statement at the Project Approach website. "Older children's project work will complement the systematic instruction in the program."

Chard defines project learning as an "in-depth investigation of a real-world topic worthy of children's attention and effort." She advocates a three-phased approach: Phase 1 involves an initial discussion of a project topic, including children's firsthand experiences related to the topic. Phase 2 involves fieldwork, sessions with experts, and various aspects of gathering information, reading, writing, drawing, and computing. Phase 3 is the presentation of the project to an audience.

Bruce Alberts says one reason he believes project-based learning hasn't caught on more is that parents weren't taught that way. But many parents who witness the transformation of their children become ardent converts. "There's a visible hunger to learn," says Ingo Schiller, parent of two former students at Newsome Park Elementary School, in Newport News, Virginia. "When we sit down to dinner, the kids talk nonstop for twenty minutes, telling us what they did and what they saw. This is literally every day!"

And conversations with teachers who use project-based learning in a meaningful way tend to use the same words: excitement, engagement, enthusiasm.

A Host of Benefits

Kids who are excited about what they learn tend to dig more deeply and to expand their interest in learning to a wide array of subjects. They retain what they learn rather than forget it as soon as they disgorge it for a test. They make connections and apply their learning to other problems. They learn how to collaborate, and their social skills improve. They are more confident talking to groups of people, including adults. And, as a number of research reports suggest, project-based learning correlates positively with improved test scores, reduced absenteeism, and fewer disciplinary problems.

"I've seen test scores of students rise because of the engagement in project-based learning," says Gwendolyn Faulkner, former technology coordinator at Harriet Tubman Elementary School, in Washington, DC. "I saw my students mainstream out of English as a Second Language into the mainstream classroom. I saw my mainstream students scoring three and four grades above their grade level on standardized tests. I'm a convert."

Eeva Reeder, a former math teacher who led a high school geometry project on designing a school for 2050, says she started project-based learning for three reasons: First, her students were not learning concepts deeply enough to apply or even remember them for a long period. Second, a growing body of research upheld the view that concepts are best understood using concrete examples constructed by the students themselves. Third, while taking a break from teaching to finish a master's thesis, Reeder took a job at a bridge-design company and realized, when she was asked to do a task, that she had never applied her knowledge of mathematics in a real-world situation.

"And that, fundamentally, was the final piece that shifted my thinking to the point where I realized I can't go back to the classroom and do things the same way I always have," she says.

If schoolchildren are given the gift of exploration, society will be the beneficiary, both in practical and in theoretical ways, scholars say. "This is the way that mathematics started," notes MIT's Seymour Papert. "It started not as this beautiful, pure product of the abstract mind. It started as a way of controlling the water of the Nile, building the pyramids, sailing a ship. And gradually it got richer and richer."