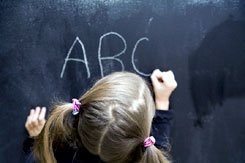 "Effective preschool education can help make all children ready to learn the day they start school and, more importantly, help close the enormous gap facing children in poverty," announced New York's Eliot Spitzer. He boldly promised to make a high-quality prekindergarten program "available to every child who needs it within the next four years."

Across the continent, California governor Arnold Schwarzenegger signed legislation expanding preschool opportunities in low-performing school districts and providing additional state dollars for building and improving preschool facilities. "Preschool gives our kids the strong foundation they need to be successful in school and in life," said Schwarzenegger.

Spitzer (a Democrat) and Schwarzenegger (a Republican) may not agree about a lot of things, but here's one area where they concur: Preschool education can perform miracles. Children who attend prekindergarten programs have bigger vocabularies and increased math skills, know more letters and more letter-sound associations, and are more familiar with words and book concepts, according to a number of studies.

Nationwide, almost two-thirds (64 percent) of children attend preschool center in the year prior to kindergarten, typically at age four. On any given day, more than five million American youngsters attend some prekindergarten program.

And a preschool day is not just advanced babysitting for busy parents. Kids also practice many key components of the school day, including the importance of routine. That's key for early learners.

"They understand carpet time, clean-up procedures, how to share crayons, or even getting their pants on and off without the teacher's help; that's big," says Steve Malton, kindergarten and first-grade teacher at Parkmead Elementary School, in Walnut Creek, California. "Little kids have only only a certain amount of what's called active working memory. If a large portion of their brain is figuring out what they're going to do next, there's less room there to spend on learning." Result: Preschool has a huge impact on their ability to keep up in class.

Too Much, Too Soon?

So, what's not to love about preschool? Plenty, say critics. "Young children are better off at home," says Michael Smith, president of the Home School Legal Defense Association. "We are in danger of overinstitutionalizing them. A child will develop naturally if the parents give the child what he or she needs most in the formative years -- plenty of love and attention. In this way, the brain can develop freely."

As soon as the subject of schooling before K-12 comes up, another concept quickly follows: testing. That gives some parents the jitters.

"The only way for school programs, including preschool programs, to show accountability of public funding for education is through testing," says Diane Flynn Keith, founder of Universal Preschool. "The only way to prepare children for standardized testing is to teach a standardized curriculum. Standardized preschool curriculum includes reading, writing, math, science, and social sciences at a time when children are developmentally vulnerable and may be irreparably harmed by such a strategy."

That's part of a broader test-them-sooner move across many grades. One pushdown from No Child Left Behind, for instance, is that high-stakes testing now begins as early as the second grade.

The result is a desperate tug-of-war between prekindergarten advocates and critics, with the under-six set placed squarely in the middle. In 2006, for instance, the Massachusetts legislature passed, by unanimous vote, an increase in state-funded high-quality prekindergarten programs. Governor Mitt Romney promptly vetoed the bill, calling preschool an "expensive new entitlement."

On the national stage, Oklahoma is the only state to offer publicly funded preschool education to virtually all children (about 90 percent) at age four. But twelve states -- Alaska, Hawaii, Idaho, Indiana, Mississippi, Montana, New Hampshire, North Dakota, Rhode Island, South Dakota, Utah, and Wyoming -- provide no preschool services at all.

"There is not enough support for preschool," explains David Kass, executive director of Fight Crime: Invest in Kids. "It's very expensive, and most parents cannot afford it."

The three costliest states for private preschool are Massachusetts (where preschool runs an average of $9,628 per year), New Jersey ($8,985), and Minnesota ($8,832). In Rhode Island, the average yearly tab for preschool ($7,800) represents 45 percent of the median single-parent-family income. In California, part-time private preschool and child-care programs cost families on average $4,022 statewide. By comparison, the average full-time tuition at a California State University campus was $3,164.

"America is forcing its parents to decide between paying for early education for their kids and saving for their college education," says the NAEYP's Don Owens.

That's when the subject of state-sponsored preschool comes up. Over the past two years, the total state prekindergarten funding increased by a billion dollars to exceed $4.2 billion. But those numbers are often inadequate. After Florida voters approved a preschool-for-all initiative similar to a voucher program, the state legislature appropriated about $390 million -- or roughly $2,500 per child served. Reasonable budgeting for preschool, however, should parallel that for K-12 schools.

"If you're a state like Florida spending $9,000 per student on a yearly full-day program of K-12, your costs for a half day of prekindergarten should be somewhere around $4,500, not $2,500," complains Steve Barnett, director of the National Institute for Early Education Research.

Barnett says Florida and other states are creating a dual system consisting of high-quality, expensive preschools in private settings and underfunded public schools for low-income families. 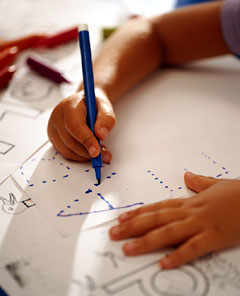 While the battle over funding continues, it's difficult to dispute the positive effects of preschool not only in better learning in kindergarten but also in long-term educational value. Furthermore, key research findings indicate that those who go through prekindergarten programs are more likely to graduate from high school and make higher wages as adults.

The research recited in support of preschool education usually comes from three long-term studies of low-income families. In the Abecedarian Project, launched in 1972 in rural North Carolina, 57 infants from low-income, African American, primarily single-mother families were randomly assigned to receive early intervention in a high-quality child-care setting; 54 children were assigned to a control group.

Each child had an individualized prescription of educational activities, which consisted of "games" incorporated into the child's day and emphasized language skills. The child care and preschool were provided on a full-day, year-round basis.

Initially, all children tested comparably on mental and motor tests; however, as they moved through the child-care program, preschoolers had much higher scores on mental tests. Follow-up assessments completed at ages 12, 15, and 21 showed that the preschoolers continued to have higher average scores on mental tests. More than one-third of the children who attended preschool went to a four-year college or university; only about 14 percent of the control group did.

Another important research effort was the High/Scope Perry Preschool study, which began in Ypsilanti, Michigan. From 1962 to 1967, 123 children ages 3-4 -- African American children born into poverty and at high risk of failing school -- were randomly divided into one group that received a high-quality preschool program and a comparison group that received no preschool.

These children were evaluated every year, ages 3-11, and again three times during their teens and twice in adulthood. The latest results of this High/Scope study were released in 2004. By the time members of the preschool-provided group reached age 40, they had fewer criminal arrests, displayed higher levels of social functioning, and were more likely to have graduated from high school.

Meanwhile, Chicago's Child-Parent Centers (CPC) have been around for 40 years, and more than 100,000 families have gone through the federally funded program, which still operates in 24 centers. Parents are drawn into the program with classes, activities, and their own resource room at each school site.

A longitudinal study by Arthur Reynolds, a researcher at the University of Wisconsin at Madison, looked at 1,539 Chicago students enrolled in CPCs in 1985 and 1986 and tracked their progress through 1999. He found they were much more likely to finish high school and less likely to be held back a grade, be placed in special education, or drop out than 389 youngsters who participated in alternative programs. Intervening early improves student achievement and has a cumulative effect: The longer students were enrolled in the CPC programs, the higher their level of school success.

Other shorter-term studies -- and there are many -- argue these kinds of benefits are not limited to at-risk children but extend to middle-income kids as well. But when a family's budget is tight, preschool becomes unaffordable. Less than half of low-income toddlers attend preschool, but half of middle-class four-year-olds and three-quarters of those from high-income families (earning $75,000 or more) attend preschool.

That enrollment gap can have immediate academic consequences, say educators, who note that the lower the family income, the more pronounced the benefits of preschool. "I've worked with a lot of kids and know the achievement gap starts before kids are even in kindergarten," says Kimberly Oliver, a kindergarten teacher from Silver Springs, Maryland, and 2006 National Teacher of the Year (who was featured in this Edutopia.org profile).

Many educators appreciate the wide range of positive influences preschool seems to germinate. Debra King, a preschool teacher for 35 years, has run the Debra King School, in San Francisco, for nearly half that time.

"There's been a big push lately to make preschoolers ready for academic learning, to teach children the alphabet and how to write their names," King says. "Many children are developmentally ready to learn these things, but I think socialization skills are more important. I believe that playing with blocks, dolls, and toys, scribbling with crayons, painting, communicating, storytelling, and music -- that's readiness for school. There are a lot of different things to learn to be successful in the world."

That's an important insight. "The original preschool was a place for socialization, but, increasingly, today it has become necessary because of working and single parents," explains David Elkind, professor of child development at Tufts University and author of The Hurried Child and The Power of Play. "And that's muddied the waters, because people think it needs to be an educational thing. We got it turned around and are learning the academic things before we learn the social skills that are prerequisites for formal education."

Elkind believes that phonics, math, and book reading are inappropriate for young children. "There is no research supporting the effectiveness of early academic training and a great deal of evidence that points against it," he says. "The age of six is called the age of reason because children actually develop those abilities to do concrete operations; brain research substantiates this.

"Take reading," he adds. "A child needs to be at the age of reason to understand that one letter of the alphabet can sound different ways. That age might be four, or it might be seven. They all get it; they just get it at different ages."

Elkind argues that toddlers need to learn only three things before entering kindergarten, and they're all socialization skills: listen to adults and follow instructions, complete simple tasks on their own, and work cooperatively with other children.

Sharon Bergen, senior vice president of education and training for the Knowledge Learning Corporation, counters that curriculum and fun are not mutually exclusive: "Children are capable of a lot of development earlier than we thought," she says. "But we don't want their time to be overly structured. We still want kids to have a good, fun, joyful childhood." With prekindergarten education, many people think, we can have it both ways.

Michael Lester is a writer and editor. He recently launched a site about fatherhood, The Dad Company.

Unfortunately, almost half the states do not meet the degree benchmark for all lead teachers. Not one state meets all ten benchmarks.