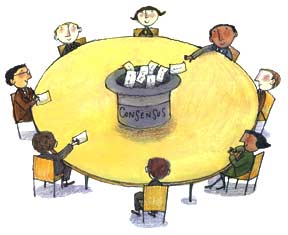 As a school principal, I continually strive to create a learning environment in which teachers, parents, and students are inspired and supported to do their best. By such conventional standards as steadily improving test scores, my school, Fairview Elementary in Modesto, California, has succeeded in this goal. Still, I often felt that something was missing -- that we weren't going beyond the black-and-white metrics of grades to create better and more productive citizens.

A couple years ago, however, when Fairview became a First Amendment School, its culture and, by extension, my life as a principal transformed significantly. The First Amendment Schools initiative is a national effort to educate the whole student, emphasizing that the study and exploration of free-expression issues is the cornerstone of American democracy and that understanding them is essential for citizenship in a diverse society. These constitutional principles, including freedom of speech, the press, and religion, and the right to assemble and to petition the government, are fundamental and inalienable. As educators, we want our students to realize that they're part of a bigger picture and that all Americans have a civic responsibility to guard these rights for every citizen.

We at Fairview learned about the First Amendment Schools program from our district superintendent, James Enochs. He thought the initiative was a great complement to the Modesto City School District's Safe Schools Project (which teaches civic responsibility as a way of creating more respectful learning environments) and urged principals to consider writing a grant to participate in the pilot project. My first reaction was that of a harried school principal: Thinking it was simply more work, I threw the application in the garbage can. As I thought more about the mission of the First Amendment Schools project, however, I pulled the paperwork out of the trash and began assembling a team to help write the grant [see "Money (That's What I Want),"]. In May 2002, our grant was selected, and Fairview became one of the country's initial eleven First Amendment Schools.

Initially, teachers were unsure how to integrate the First Amendment Schools' civic mission into the curriculum. Fortunately, a new civic-education scope and sequence for California classrooms, developed by the Center for Civic Education, helped focus our efforts. Now Fairview teachers weave civics lessons into their K-5 standards, creating engaging and relevant lessons for their students.

Our kindergartners, for example, learn to share, to develop and follow classroom rules, and to explore the history of Independence Day. Likewise, second graders learn about individual rights and actions. Activities typically combine multiple subject areas, so students are building, say, literacy or math skills while learning valuable lessons about life in a democracy.

Fairview fourth graders put these lessons to practical use during the last school year when they petitioned school administrators to improve their lunch choices. After complaining for several months about the ravioli served on Thursday in the school cafeteria, they decided to do something about it. They surveyed the students and determined that most of them didn't like the pasta. The fourth graders then drafted a petition and secured 775 signatures in favor of getting rid of the "cursed raviolis." Working with their teacher, they then wrote a persuasive argument for changing the menu and sent letters detailing their request to the district's food-service director, who came to campus and met with the fourth graders to discuss the issue. Their efforts were successful: Fairview students now enjoy macaroni and cheese for lunch on Thursday, not ravioli. 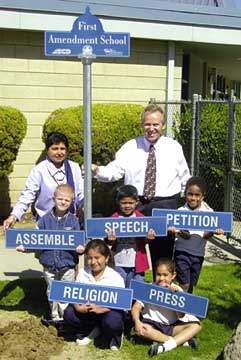 Our mostly Spanish-speaking parents, too, have discovered the power of civic engagement. In the past, many parents avoided school; they were uncomfortable with the language and cultural barriers, and, as a staff, we didn't do enough to reach out and make them feel welcome. That has changed, however, as we have become more conscious of the importance of hearing all voices in a school community. Today our Latino parents' group, called Padres Con Voz (Parents With a Voice), meets once a month to discuss concerns, ask questions, and make suggestions.

With these changes has come a new mission statement for Fairview: Sí se puede! . . . Yes we can! Crafted with the involvement of teachers, parents, and students, it supports academic achievement based on values, confidence, and respect, and it emphasizes the importance and value of a schoolwide civic spirit.

Fairview Elementary School is a much different place today than it was when we signed on to the First Amendment Schools program. Being jolted into understanding the five freedoms and creating a laboratory in which to practice them changes the way people listen to one another and the way they treat and respect one another. Our schoolwide culture is based now on a respect for differences and a commitment to helping all students become successful, informed adults. Our civic purpose drives our daily work and desire to improve how we teach.

I have never enjoyed my job more than I do right now. I've seen students at my school become engaged and excited. I've watched as parents have become eager, active participants in their children's education. And I've seen teachers reach to new heights as they explore new practices and create curriculum that is engaging, relevant, and infused with a larger purpose.

In the course of all these changes, our test scores have improved, too. When you create an environment in which children understand and feel good about their purpose, things change. Our students are happy, they are achieving, and they understand there is a greater meaning to school than simply getting good grades. You need to become a good member of your community and society as well.

Rob Williams is principal of Fairview Elementary School in Modesto, California, and the congressional representative, District 18, for the Center for Civic Education, California. Write to williams.r@monet.k12.ca.us.