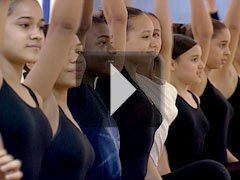 Editor's Note: Since we reported this story in 2002, the featured school, I.S. 218, has been re-organized into three separate schools, where the programs and services described are still flourishing. Children's Aid Society now operates twenty-one community schools in New York City, and you can find more information about those schools on the CAS website.

For students at IS 218, school is much more than a place to study history or hone their mathematical skills. It's where they go for immunizations or to get their teeth cleaned. It's where they build their own bicycles, gain access to state-of-the-art computers, and learn to play the cello or dance a Broadway jazz number. And it's a safe place where there is always a trusted adult available, whether it's to help with homework or to lend a sympathetic ear.

IS 218, "home" to nearly 1,700 middle schoolers in the Washington Heights neighborhood of New York City, is what's known as a full-service community school. It's organized and managed through a partnership between the New York City Board of Education and the Children's Aid Society (CAS) of New York City, one of the oldest child welfare organizations in the city. The school is open six days a week and over 300 days a year, offering academic and enrichment classes, medical, dental, and mental health services, and a wide range of adult education classes for parents, grandparents, and older siblings.

The community school at IS 218, along with the other nine New York City schools with which the Children's Aid Society has partnered, is based on a simple but powerful notion: Children can succeed academically only when all of their health, nutrition, emotional, and developmental needs are met.

Keeping Kids in School -- and Parents at Work

One of the first areas you see when you walk into IS 218 is the free clinic. It's where Dr. Hugh Gilgoff dispenses antibiotics, makes sure students are current on their immunizations, and works as part of a team of educators, social workers, and other medical professionals to make sure students stay healthy -- and stay in school.

On one typical March school day, for example, a student came in to the clinic complaining of tightness in his chest from an asthma flare-up. The student had two treatments on the clinic's Albuterol machine and then went back to class once the tightness had subsided. "We kept him in school, kept him learning," says Dr. Gilgoff. Without the school-based clinic, the student would have missed an entire day of school and his parent would have missed a day of work -- and perhaps the wages that went along with it.

The clinic at IS 218 provides students with a broad array of medical services -- from taking care of immunizations to treating chronic problems, such as asthma.

Social workers are available twelve hours a day for students and their family members, and provide another vital piece of the safety net designed to keep kids in school. They counsel students individually. They organize group sessions around common concerns, such as anger management or self-esteem. And they help children and adults alike -- including school staff -- deal with both daily stressors and life-changing events.

For the Washington Heights community, the fall of 2001 brought with it two such events. First came the terrorist attack on the World Trade Center, followed by the crash of a passenger airliner headed for the Dominican Republic, the birthplace of many area residents. No one at IS 218 was untouched by these tragic events. Friends and family members were injured or killed. And everyone's sense of security was shaken.

Now, more than ever, the students seek out adults to guide them through the turbulent times.

"Students come down and say 'Do you have a minute?'" says Scott Bloom, director of mental health for the school-based clinics run by the Children's Aid Society. They talk about bad dreams, about anxiety over an upcoming test, or a frightening news report. They ask, "Am I going to be safe? Are my mom and dad going to be safe?"

"We're always there. We can talk anytime," says Bloom. "That's very positive for kids. It's something they can count on."

Through IS 218's innovative "Recyle-a-Bicycle" program, students can earn the opportunity to build their own bike using recycled parts.

From Bach to Bicycles

At many schools, students pack up their books and head home when the bell rings at three o'clock. But at IS 218, the afternoon bell doesn't signal the end of the day -- just a continuation. In one room, the string ensemble is practicing. The group of talented young musicians meets every day -- the only such program in the entire school district. Down the hall, students are sorting through bike parts, tightening wheels, and assembling bikes as part of a recycling program. Elsewhere in the three-story facility, students are participating in math and reading literacy programs, using the school's new wireless laptops, or choreographing a dance number.

Isabel is what you might call a "regular" at the Recycle-a-Bicycle program. You'll find her in the classroom-turned-bike shop on Wednesdays, Fridays, and Saturdays, where she dutifully logged her hours to qualify for the ultimate reward: to build her own bicycle and take it home.

"I like being here," Isabel says as she tightens the wheel on her bike-in-progress. "I like building my own bike and learning how it works."

The innovative recycling program began in 1993 with a grant from the New York City Department of Sanitation, which was eager to get discarded bike parts "out of the waste stream and on to the streets," says program coordinator Audrey Warren.

Besides being good for the environment, the program is also an excellent opportunity to encourage students to think mechanically, to tinker, "to do things they're not likely to do anywhere else," says Warren. "They ask questions like: Why do we use ball bearings? What is friction? and How do ball bearings reduce friction?" she adds. "My hope is that they then go back and ask those same questions of their science teachers."

Wireless laptop computers are the latest addition to IS 218's computer lab, used throughout the school day and as part of the after-shcool program.

Writing Yes in Your Heart

Rather than trying to replicate what goes on during the school day, CAS' role in the after-school program is to support and enhance the work of classroom teachers. Traditionally, that support has come in the form of enrichment and athletic opportunities, but increasingly it also includes providing students with the extra assistance they need to succeed academically.

For some students, that means help with homework before they move on to the "fun" activities. For others it means participating in literacy and mathematics programs, geared toward helping students develop the skills they need to perform at grade level.

A leadership team comprised of CAS staff, teachers, and school administrators develops each new offering jointly. Often, in fact, it's the classroom teachers who lead the after-school activities, providing another level of continuity between what happens during the school day and what happens before and after the bell rings. Teachers who choose to work in the after-school program get paid for the extra hours they put in.

By just about every measure, these joint efforts are paying off. A study conducted by Fordham University researchers found that reading and math scores on standardized tests are higher at IS 218 than at comparable middle schools. Both student and teacher attendance is higher than at other local schools, with the student attendance rate surpassing that of every other middle school in the district (and significantly better than the citywide average). Researchers also found that CAS community schools are safer, have more involved parents, and are considered "special" by students, staff, and parents.

"It doesn't mean there aren't challenges," concedes Jane Quinn, assistant executive director for Community Schools for the Children's Aid Society. "There's never enough space. There's never enough money. And the needs are always greater than the resources we can bring to the table, even collectively. But if you have the word yes written in your heart, you can make almost anything happen. We're living proof of that in our schools in New York City."