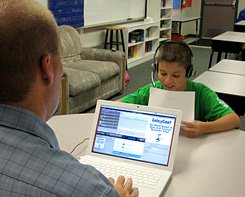 Brent Coley's fifth-grade students' eyes light up when they learn that their schoolwork can be heard in Apple iTunes, the program that allows them to compile their favorite artists' music.

Although the Tovashal Elementary School students, in Murrieta, California, won't be jamming on guitars or drums in Coley's class, their studies of poetry, the solar system, and the early English settlements in North America become exciting when they're posted on a class Web site and saved in iTunes as ColeyCasts, room 34's take on podcasting. (Download the latest version of iTunes here.)

Web distribution of their work motivates students to put their best foot forward. "My Web site has been viewed in all fifty states and eighty-seven foreign countries," Coley says. "I use that to my advantage. When I show the kids statistics and recent visitor numbers, it tells them that I'm not the only person who is going to hear what they're doing. People in Australia and England are going to hear it."

With minimal technology, Coley gives his students a global audience. And he's not alone. Teachers across the nation are helping their students produce an impressive array of downloadable educational material. Directories such as the Education Podcast Network and iTunes U K-12 try to organize that material. (See the Edutopia article "In One Ear: iTunes U Puts iPods to Good Use.") And award programs, such as the KidCast Podcasting in the Classroom Awards, honor the best of it.

Access to digital educational content at school, at home, and on the go is growing. The Pew Internet & American Life Project reported in September 2008 that 74 percent of kids ages 12-17 own an iPod or another MP3 player, up from 51 percent two years ago. The portability of digital content available for MP3 players such as the iPod and Microsoft's Zune player boosts instructional time by making course content available anywhere. Fort Sumner Municipal Schools students who took part in a Zune media player pilot study used the technology to study during long bus and car rides and to access study materials including video, audio, and Microsoft PowerPoint slides in their rural part of New Mexico. This learning on the go pushed Spanish I grades "through the roof," according to Superintendent Patricia Miller.

At the end of a social studies or science unit, Coley breaks the class into groups of two or three students so they can develop podcast scripts by discussing and summarizing what they've learned. Coley reviews the scripts for accuracy and helps students record audio on the classroom computer or on his iPod using a Griffin iTalk Pro voice recorder. Coley adds an introduction and music between each segment before playing the finished product for the class and posting it on iTunes and mrcoley.com. 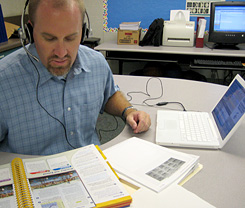 "I've received emails from teachers all over the country who have found the site in a link and listened to it," Coley says. "I pass the messages on to the kids, and it keeps them motivated to do their best work."

Podcasts are simply audio recordings stored as MP3 files or in another file format. The creator syndicates the recording via the Internet, and the listener plays it using a digital music player on a computer or a mobile device, such as an iPod or a Zune. Though the term podcasting combines iPod and broadcasting, however, you don't need a portable MP3 player to create or distribute the audio files. Coley produces most of the class's podcasts with just a computer, a microphone, Internet access, and free audio-mixing software such as Audacity or Apple's GarageBand. Teachers can even burn the audio files onto CDs so that students who lack iPods or computers at home have access to the material.

When used educationally, podcasts can empower students and teachers to become content producers rather than content consumers, and they can give them audiences beyond the classroom. Student-created podcasts reinforce course concepts, develop writing skills, hone speaking ability, and even help parents stay current on classroom activities.

"It gives them a sense of purpose, rather than seeming like just another academic exercise," says Dan Schmit, creator and host of the online community KidCast: Podcasting in the Classroom. "You give them a sense of mission for their work and give them all these authentic experiences that build their confidence for the future."

Schmit says that the best student-created podcasts go beyond isolated episodes to engage in sustained academic conversations. They are focused on a real audience and explore grade-appropriate questions that are both interesting to students and important for them to understand. KidCast award winners such as Radio WillowWeb, from Willowdale Elementary School, in Omaha, Nebraska, illustrate this point. "It's not about the technology so much," Schmit says. "Podcasting is much more about inquiry, analysis, and articulation."

It's also about oral-presentation skills and storytelling technique -- finding the characters, conflict, and resolution that help clarify a topic for the audience. "If a podcast feels like someone is just reading to me, it's not as engaging as when it feels like the students are having a conversation with me," Schmit says. "It's sort of like an extra step that we don't usually get to do in the language arts. Here, they are listening to themselves. Even in speech class, students read their work but don't hear it, because they are in the moment."

Speaking about course content also moves students away from copy-and-paste research. "You get kids to massage the content in a way that really makes it their own," Schmit points out. "The ability to tell a compelling story is going to be one of the most important twenty-first-century skills that we can give students."

In 1995, educator David Warlick created Landmarks for Schools to help teachers navigate the wilderness of online educational content. The Internet has grown exponentially in the years since, but he's still erecting guideposts to show teachers the way to valuable resources via his podcast Connect Learning, his site The Education Podcast Network, and his blog 2¢ Worth.

Looking ahead, Warlick expects communication and the selling of ideas to take on larger significance in the work world. This trend, he says, "requires that teachers and students learn to be information artisans -- people who can creatively and artistically reshape information and raw material into compelling information products."

Those information products may take the form of blogs, podcasts, video games, or virtual worlds -- whatever medium is best suited to the learning objectives. School facilities and assessment methods will have to change to embrace the shift, though. Warlick envisions libraries evolving into digital workshops where students produce multimedia content. In turn, new rubrics will emerge to evaluate students' multimedia work.

Still, Warlick reminds teachers that the exchange of ideas -- not technology -- is the point, and production -- not memorization -- is the proof of knowledge. "We're in the classroom to teach them not how to podcast, but how to communicate, and communicate compellingly," he says.