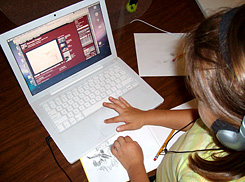 Los Angeles high school teacher Antero Garcia wanted his students to analyze the subtle ways in which advertisers deliver messages. He figured he'd jump-start the discussion by having the class watch a few television commercials broadcast during the recent Olympic Games.

The clips were all available on YouTube, but Garcia knew he couldn't send students to the Web site during class. "Our district blocks YouTube, MySpace, Flickr -- all the social-networking sites that students think are fun and interesting," he explains. But Garcia didn't toss his lesson plan. Instead, he cued up a few videos in his laptop's memory cache at home and then high-tailed it for campus, hoping the computer's battery wouldn't die en route.

Like Garcia, teachers across the country sometimes must travel circuitous paths to use online resources in the classroom. In the interest of child safety, individual schools and entire school districts often install content filters that aggressively block these Web 2.0 tools -- not only social-networking sites but also blogs, wikis, and other Web pages that allow educators and students to create and access content.

Content filters and firewalls are great for keeping kids away from pornography, as required by the Children's Internet Protection Act (download the PDF), or preventing them from updating their Facebook status during class. But the same filters can stop teachers from accessing cutting-edge widgets and digital materials that have enormous potential for expanding learning.

Granted, these tools are relatively new, especially in the classroom, which means administrators are still grappling with how to approach them. Policies about Web site use vary from one district to the next, and sometimes from school to school within the same district. "It's all over the map," says Kevin Honeycutt, a technology-integration specialist who works with districts in Kansas. This causes "no shortage of teacher frustration," he says, adding that he once overheard a technology coordinator threaten to fire any teacher who dared to bring Web 2.0 applications into the classroom. "But that's the exception," Honeycutt concedes, "and he later apologized."

New Hampshire kindergarten teacher Maria Knee, a pioneer in using Web 2.0 tools with young learners, points out that keeping powerful tools out of students' reach during the school day doesn't prepare them for life. "Our kids are going to be using these tools and sites anyway," she argues. "Don't we want to educate students about them at school?" Many teachers do, and they've found some clever ways to get Web 2.0 tools into the classroom. Here are four practical suggestions:

YouTube wasn't the only site that gave Antero Garcia trouble. He wanted to use Twitter, a popular microblogging tool, to have students ask homework questions or collaborate with classmates via their cell phones (the one technology all his students have). Twitter was blocked, but the barrier wasn't where Garcia thought it was.

"It turns out the district wasn't blocking access, but my school was," recalls Garcia, who then spent a week navigating the bureaucracy of the Los Angeles Unified School District to resolve the matter. "Once I located the right tech person -- who was friendly but overworked -- he entered a couple of keystrokes and let my students use the tool."

Knowing who holds the keys and establishing a good working relationship with that person is one strategy for unlocking the Web 2.0 toolbox. Technology staff, not instructional experts, typically make decisions about Internet filtering. "The wires-and-pliers folks are the ones who get blamed if something bad happens online," Honeycutt points out. Their job has been to limit access to technology, not to empower end users, he says. "Nobody told them that there's been a sea change." Getting that conversation started can be a first step toward better accessibility.

Knee, an early adopter of blogs, podcasts, and online games with her kindergartners, works closely with the technology director at Deerfield Community School, in Deerfield, New Hampshire. In addition, her district routinely blocks most social-networking sites and online games, but Knee is able to gain access with a call or an email to her district's tech director. Knee just forwards the URL of a site she wants to access, along with a short explanation. "I'm thankful for her support," Knee says. "She understands that I have an instructional purpose for using these sites, and she gets them unblocked within a few hours."

Being able to explain your instructional purpose for using a particular tool is critical, Knee says. She uses blogs as part of her literacy program and for math and social studies, and as a tool for connecting working parents with their children's all-day kindergarten class. She overcame a district block on gaming sites when she made a strong case for using Webkinz to teach her young students about online safety. And she shares results with school leaders, she adds, "so they can see what's possible."

When Honeycutt introduces Web 2.0 tools to schools, he often starts with a virtual sandbox in which teachers can play with new applications before granting access to students. "We need to create places where teachers can take chances," Honeycutt says. “Every district needs to anoint some teachers to play with Web 2.0 tools in a safe, hypothetical environment. I call it taming the tool. Teachers need time to consider, 'Under what conditions would we allow this tool into the classroom?'"

Other schools create more of a walled garden, where teachers and students are free to create online content, but the outside world can't watch. Steve Hargadon, project director for the Consortium for School Networking's K-12 Open Technologies Leadership Initiative, says this type of environment is a safer place for experimentation. "You can provide access to Web 2.0 tools internally without having to face outside the school network," says Hargadon, who created the popular Classroom 2.0 social-networking site for teachers. "This gives you time to get comfortable before deciding how much to open it up."

He says the easiest solution is Moodle, a popular free learning-management system. "You can install it on a server within a school," he explains. "It has discussion forums, wikis, many of the collaborative pieces. But you control who gets to see the content." Other free open source applications include Elgg and Drupal, both of which require more technical expertise to install and manage. Teachers may also access ready-made, secure, and free student workspaces provided by companies such as ePals and Oracle (through its ThinkQuest platform).

The Eastern Townships School Board, in a rural part of the Canadian province of Quebec, has a consistent, open policy for Internet filtering. "We don't block anything," says Ron Canuel, director of the 7,000-student district, which assigns every child a laptop starting in third grade. "Instead, we focus on educating kids and providing supervision."

When it began the laptop initiative six years ago, the district took a hard look at Internet filters. “We realized that students don't see these as impediments, but rather as challenges,” Canuel says. "Students find ingenious ways to go around them." Rather than fighting to stay a step ahead of tech-savvy pupils, the district emphasizes online safety and digital citizenship.

"We spend a lot of time educating students about what's good and bad information," he adds. "We ask questions about the sites students are accessing." Students understand that they'll face sanctions if they engage in inappropriate conduct online, Canuel says. Five years of research show benefits across the board, he adds, citing stronger academic results, a lower dropout rate, and improved attendance.

Instruction in digital citizenship needs to start early, agrees New Hampshire teacher Maria Knee, and it requires ongoing adult supervision. "Being online with five-year-olds is something I don't take lightly," she says. "On field trips, we work to keep kids safe. This is the same thing. We can't afford to make mistakes." As students get older and their technology skills increase, they continue to need modeling and mentoring. Tech-integration specialist Kevin Honeycutt adds, "Kids get smart fast when it comes to technology, but the filter between their ears is still developing. That's our job, as educators, to help with. We have to get kids ready for the future, even if we're uncomfortable."

Teaching students to use online tools safely and effectively comes down to treating everyone equitably, Antero Garcia believes. His students are predominantly Latino or African American, and almost all come from low-income families. "Most of them don't have Internet access outside of school," he says. "And in school, they only get to use computers for research or test prep. They don't have relaxed opportunities to explore online or just update a MySpace page. A lot of teachers might see that as recreation, but there's a lot of educational potential in these sites."

Garcia advocates for more open access as a social-justice issue. On his own blog, he writes, "Sooner or later someone is going to expect my students to be able to quickly and effortlessly post to a blog, add to a wiki, or collaborate via some sort of social-networking protocol. And once again, my school will have failed to prepare them for such a task."

In the still-evolving Web 2.0 era, anyone with Internet access has the power to create and publish content online and interact with content others have created. It's nothing less, the Consortium for School Networking's Steve Hargadon says, than "epic change" in how information is shared and shaped. "The great majority of educators don't understand that yet," he admits, but he is encouraged, he adds, by "how dramatically far we've come in just the last two years. We're just at the beginning stages of figuring this out. We'll get there."