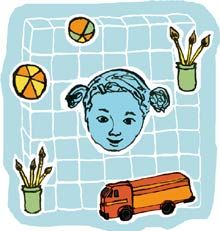 Children need to play. This observation might seem obvious, but lately, it is my rallying cry. It has to be. There is so much discussion among parents and educators about the relative benefits of academic versus developmentally appropriate preschools, and as testing rules the day, proponents of the academic model seem to be gaining ground.

But I am a parent, and I have been a preschool teacher for more than twenty years, and my experience and training tell me one thing loud and clear.

They need to build with blocks, role-play with dolls and cooking tools, assemble tracks for trains, dabble in paint, jump up and down, ride tricycles, smush playdough, dig in sand, splash in water. They need to negotiate with ladders, slides, and each other. Take turns. Dress up. Cook.

And when they aren't doing those things, they should be singing songs -- old ones and new ones. They should be listening to stories and looking at books. They should be banging a tambourine or tapping a triangle. Feeding a fish. Watching a hamster.

"So, why not cut to the chase?" academic-preschool advocates wonder. "Won't children learn to read more quickly if they memorize the alphabet? Isn't counting the direct path to math? If a child sits at a table and copies letters and numbers, if they are drilled on words and simple equations, won't they know more, sooner, and without all the messing around?"

No. They aren't ready.

There are connections in children's brains that are usually not completed until between the fifth and sixth year of life, and they take another year or so to mature. These connections are essential for learning to read. When children haven't grown enough to be ready to read, they won't be able to do it easily. And if they can't do it easily, they will be stressed and frustrated in the process of trying to meet the unrealistic expectations of parents and teachers.

Most school districts require that children learn to read between five and six years of age. Most of them, especially boys, who may be developmentally behind girls of the same chronological age by up to eighteen months, have a hard time. By trying to teach children what they are not ready to learn, American schools are producing children who may become resistant to learning -- and for no good reason, it seems: Studies have shown that early readers have no real advantage in the long run, because their peers have usually caught up with them by age eight.

Children's physiology and brain development have not changed a great deal in thousands of years, but what we expect of those bodies and brains has changed a great deal. We want more from them; we want it sooner. They can learn what we want them to, when we want them to, if parents and teachers are consistent and very patient -- but why bother, when they are not ready?

Let's not "push down" the curriculum. Let's allow children to discover letters, numbers, colors, and language in a way that also teaches socialization, imagination, values, and joy.

If parents are concerned about reading and writing, they can read and sing to their children every day; they can let their children watch them write -- letters, bills, grocery lists. They can swap stories. Tell jokes.

And they can take them to a preschool where they will be allowed to play.

Trish Konzak has taught preschool for twenty-three years, nineteen of them for Heather Farm Preschool, in Walnut Creek, California.