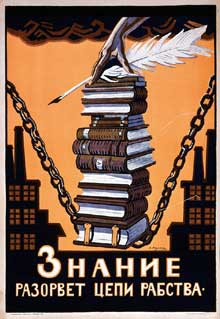 Somewhere in Sydney, a man quietly communes with his computer, poring over visual "materia obscura" from every corner of the world and a wide spectrum of centuries. Through RSS (Real Simple Syndication) feeds, bookmarked links, e-newsletter subscriptions, and search engines, he sifts through the Web looking for art collections, exhibitions, archives of old engravings, and portfolios of contemporary graphic artists to share with the world.

This man isn't looking for any particular thing; rather, it seems he's looking for every beautiful, peculiar, or haunting piece of art that has ever graced the pages of a book. But what he's looking for exactly is not important -- what matters is that he's gathering up the gems and oddities he finds for a visually rich site called BibliOdyssey, a splendid classroom-discussion tool and entrée into art and its history.

The Webmaster, Paul (he has asked that his last name not be printed), is a mysterious man in his early forties who was born and raised in Sydney and has spent some time in Vietnam. Known on the site only as peacay or pk, he says his digital guise isn't an effort to create what he calls a "secretive persona" but rather the result of a desire to take a backseat to the art, "because, after all is said and done," he adds, "I'm just a curator, and it is the content that deserves center stage."

A calendar printed by the Antikamnia Chemical Company.

Paul's BibliOdyssey began with what he describes as the "vague notion" to find interesting but obscure book illustrations. Coupled with this desire was his growing experience with (and eventual expertise in mining) the riches of the Internet. Using the burgeoning blogosphere, Internet communities such as Metafilter, and the online bookmarking site Delicious, he began saving images, then learned how to tweak them for presentation. Like any bricks-and-mortar gallery curator, he wanted to share his personal pleasures, so he began posting his rare finds to a Blogger.com hosting site. The rest of his Odyssean venture naturally fell into place from there.

"The most profound change to the site took place with my gaining more confidence handling the images," he says. "From this flowed an increase in the number of images per post, along with an eventual belief that the site functioned best as a visual magazine rather than just one or two images per post."

At this writing, BibliOdyssey offers more than 700 posts, all organized, tagged, indexed, hyperlinked, and readily available to any art lover with a modem. Each posting of images includes Paul's meticulously researched commentary, as well as more links for those students or teachers interested in continuing the exploration.

"What you see in a single post may have taken days, and sometimes months, to collect, research, write, and edit," says Paul. "For every hour of work in producing a post, there have probably been ten hours of not-quite-fruitless searching, reading, and editing."

This attention to detail, and in the quality of the art itself, can draw teachers and students alike into a world of odd, elegant, and often surprising images -- each with its own story to tell. A journey through BibliOdyssey gives art students a chance to sample an eye-peeling exhibition of art and illustration ranging from a powerfully imagined sketch of a stormy sea during the Permian age to the funny and peculiar skeletal "Funny Bones" color sketches of Louis Crucius, displayed in the window of a St. Louis pharmacy during the late nineteenth century.

One of the most significant things to be learned from BibliOdyssey is how the Internet can open astonishing new worlds to anyone. Paul has no background in the visual arts (his résumé mentions experience in nursing, biochemistry, the insurance business, and teaching English as a second language, but no design background). Wide-ranging curiosity and a natural gift for spotting memorable art, combined with the modern miracle that lets us search archives around the globe, have made possible something as engaging as this site.

The man behind the screen isn't reaping any financial gain from his work, other than some advertising revenue. He calls the site his "online manifestation of a personal midlife crisis," joking that it's an obsessive hobby that "keeps me off the streets." His Web browsing is never topic based; the primary goal is just to find what he considers "artistically viable" images that catch his eye and appear in enough numbers to merit a post. "I can react to something if it's bizarre or elegant or gorgeous or smart," he says. "But I can -- and very often do -- find beauty or interest in the minutiae: the technical virtuosity of an engraving or the possible meanings of some motif in an allegorical picture, or simply the exquisite beauty of a particular color. I like obscure and weird, certainly -- images that are often less well known -- but, like everyone, I have a wide potential for visual interest."

Sharing this interest with others is the main reason Paul plays the assiduous curator, along with the creative freedom it grants him.

"Without delving too far into the psychology, BibliOdyssey allows me an outlet for my research tendencies and, in an ongoing way, positive feedback makes me feel that I'm doing something that's appreciated," he says. "That, in turn, provides justification for continuing to search for weird and wonderful visual images."

And there is no doubt he takes pride in his site and works hard for the greater good of the free, easy-to-access information the Internet is celebrated for.

"I had a duty to be as accurate as possible," he says. "Otherwise, I would feel as if I wasn't making any real contribution. I pride myself on providing, to the best of my modest abilities, the most interesting and important information as an accompaniment to the images. Images can be magnetic invitations to learn. BibliOdyssey is a good example of using image-based enticements to draw people to the stories, history, and backgrounds of many subject areas."

Damien B. M. English is a freelance writer living in San Francisco.