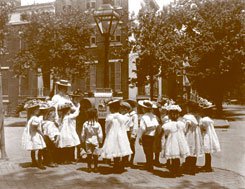 Most of my memories of elementary school have faded, especially the bits that came from textbooks. But certain sensations from that time, specifically the ones that came during field trips outside the classroom, are still vivid: the deafening roar of a mill on the verge of devouring a massive redwood tree; the icy water of a freshwater tank where I first held a starfish, rough as a cat's tongue; the rush of authority that came from wearing little white paper caps on a tour of a bread factory. (We solemnly folded them and took them home.)

These trips didn't teach us how to read or do math, at least not as far as we knew, but they showed us what unsheltered life and adulthood looks like, what nature smells and feels like. We explored the noisy world of machines, once the exclusive realm of fantasy or television. We saw how things are made. Those trips didn't just leave us with a handful of sensory treasures. They gave the dry and sometimes confounding lessons we had in the classroom a pulse and a context.

There's no official graph charting the frequency of field trips in our schools over the last few decades, but an informal poll of teachers and administrators in school districts across the country suggests that children -- especially kids in disadvantaged schools -- simply aren't leaving the classroom the way they used to. Standardized testing and the intense pressure it puts on teachers to teach to them are important reasons, but not the only ones. Increased security, the rise of the Internet, budget crunches, and more formalized school curricula have all changed the way kids see the world beyond the classroom.

Following the harshest budget cuts, many schools found that they simply could no longer afford the school buses, ticket fees, and other costs incurred when kids leave the classroom. In Iowa, according to a 2003 National Education Association report, 75 percent of districts cut back on field trips or asked parents to pay for them. That year, in Michigan, Kentucky, and Missouri, many schools eliminated field trips altogether.

At schools in wealthier neighborhoods, or in places where parents can subsidize district budgets, teachers have had some success finding private funds to cope with shortfalls. In Menlo Park, California, for example, parents raised more than $900,000 to pay for student activities, including field trips. In Oregon's Junction City school district, fathers produced a Full Monty-esque calendar to raise money for programs the district had been forced to cut.

Michele Reese teaches at Markham Elementary School, a "little engine that could," as she describes it, in Hayward, California: More than 55 percent of the school's students receive free or reduced-cost meals and fewer than half test at or above the state average in reading, spelling, or language. Last year, after Markham students failed the state's standardized achievement test by one point, it became a state-monitored school, under the direction of a School Assistance and Intervention Team (or SAIT), as mandated under the No Child Left Behind Act. This state-ordered, no-frills approach to education forced a radical increase in math and reading instruction -- at the expense, says Reese, of social studies, art, and almost everything else, including field trips. "Anything that doesn't have to do with the state reading or math mandate is discouraged," she says.

Curriculum demands aren't the only hurdles to clear. Markham, like many other schools, runs tuberculosis screenings and background checks on potential field trip chaperones, going so far as to fingerprint volunteers to screen out those with criminal backgrounds. In a low-income, largely Latino community where many families are undocumented immigrants, some parents can't risk the scrutiny. Even fewer can take time off from work to chaperone a class. In order to bring her classes on field trips, Reese needs four or five parent chaperones; the ideal ratio of students to adults is 5 to 1.

Even when she finds a few parents to come along, Reese is at a loss for wheels. The cost of charter buses is prohibitive, and taking public transportation is a recipe for chaos. These days, if her students go anywhere, they go on foot. "If someone rolled a bus up in front of my classroom, I'd be out so fast," says Reese. "I would take those kids to the zoo, I would take them to the Exploratorium, the Oakland Museum. I would take them to the Marin Headlands. They need the exposure, and those are all doable field trips."

In districts that are not as pinched financially, the trend toward fewer field trips has prevailed. Teachers and administrators say the reason isn't always financial. There is hot debate over which field trips qualify as educational, as opposed to those that, as one administrator described it, "waste kids' time."

"There have been a lot of things we've done to revisit our field trip guidelines to make sure that they are educationally appropriate," says Ruth Reilly, assistant superintendent of schools in Pasco County, Florida. "We had some situations where schools had annual field trips that weren't necessarily aligned with the curriculum." Nowadays, she says, "there's a real focus on accountability, and making the grade with the test score. And there's the feeling in many cases that field trips take time away from more focused classroom time."

Kathi Slaughter, a spokesperson for the Iowa Department of Education, describes a similar situation in her state."There is more pressure today for trips to provide a direct link to curriculum," she says. "We've heard that from our state Department of Natural Resources, for instance. They have several locations that used to be popular with student visits; students would spend easily three or four days doing various hikes and experiments. Now, they're finding fewer student groups visiting those sites. Part of it is the expense, but part of it is that there is so much attention and focus on testing that any activity that doesn't affect a test score can be considered too frivolous."

What qualifies as frivolous? In some communities, a child's exposure to the outside world can be incredibly limited. Reese describes a day when, preparing fourth-grade students for the state's writing exam, she began with a practice essay question: "What would it be like to have a pet elephant for a day?" Her students were stumped; none of them had ever seen one. In these kinds of schools, where teachers simply can't count on parents to provide horizon-expanding experiences, there's almost no such thing as a field trip that wastes kids' time. Any exposure to the world outside the school, even through the windows of a city bus, gives children a way to make sense of what they learn in the classroom.

"They are really neighborhood kids," says Sonya Robbins, who teaches at a charter school in Brooklyn's Bedford-Stuyvesant neighborhood, "and so doing anything outside of the normal routine is incredibly exciting. As soon as our bus pulls away and gets maybe ten blocks out of the neighborhood, it's like they're tourists." For Robbins's students, including some who have never seen the beach or left the city, the journey is just as much of a learning experience as the destination. "They love just being on the bus, looking out the window and seeing the larger world."

With no means of transportation, a dearth of chaperones, and a lack of funding, some teachers have begun to use the Internet for so-called virtual field trips, such as eField Trips and Tramline Virtual Field Trips. Others bring food, music, or guests into the classroom instead of taking kids out. But few sensory windfalls occur during these "excursions," and, more importantly, there's minimal contact with a world they will need to contend with relatively soon.

"Kids need to see that there are jobs out there. They need to see careers," says Reese. "If you take a child to a bread factory, and they see how bread is made, they connect it with other things in their lives. Real intelligence comes from making connections. We can raise their test scores, but it's not going to change their lives, really. All learning is based on prior knowledge, and field trips help kids learn about the world."

Amy Standen is a former contributing editor for Edutopia. She reports on science and the environment for KQED-FM, in San Francisco.