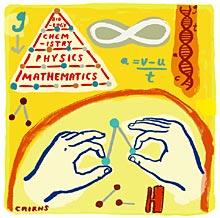 I am a research physicist who has spent the past ten years working to improve the teaching and learning of science in programs for students from kindergarten through community college. I've visited a wide range of sites, from inner city, poverty-dominated schools to a public school for the gifted where the students live on campus for three years.

A scientist may be a highly experienced teacher but is rarely an educator, comfortable in the world of summative assessments, or in the complex interactions of educational systems that include parents, teachers, unions, school boards, city and state educational officers, legislators, textbook publishers, and schools of education -- and, oh, yes, students.

However, about twelve years ago, my colleagues and I began to focus on the fact that a vast majority of public high schools are teaching science using a curriculum developed in the nineteenth century. This threadbare approach follows a sequence, designed by a national commission in about 1890, in which students study biology first, then chemistry, and then physics in eleventh or twelfth grade -- if at all. More than a hundred years ago, this was a plausible sequence justified by the notion that the study of physics requires a higher level of mathematics than biology does. In 2006, however, this is an absurd line of reasoning that ignores all the revolutionary progress these core disciplines acquired during the twentieth century.

Today, we know that the disciplines follow a natural hierarchy. Think of it as a pyramid: The base is mathematics, which does not rest on or need any of the other disciplines. But physics, the next layer of the pyramid, relies heavily on the science of numbers -- so much so that physicists have, in desperation, invented subbranches of mathematics.

Above physics sits chemistry, which requires physics for the explanation of all chemical processes. For example, the periodic table of the elements, displayed worldwide in billions of classrooms, is really a tabulated structure of atoms. Because everything is made of atoms, some sense of their structure and function should be part of early science learning. The fundamental chemical laws of compound formation find their explanation in the laws by which atoms combine to make molecules. When the molecules studied are sufficiently complex, we are verging into molecular biology.

The discoveries of quantum science in the 1920s, and of the structure of DNA in the 1950s, established the key connections between the disciplines and demonstrated a crucial element of how science works. Thus, the reversal of a sequence for studying science is long overdue. Yet, except for a small number of prescient institutions, the vast majority of high schools still teach biology in ninth grade, followed by chemistry, followed by physics. In this crazy conformity to nineteenth-century curricula, the biology is descriptive, full of complex Latin words that must be memorized, and is of little use in the sciences that follow.

Changing the sequence, however, is only the first step in creating a twenty-first-century curriculum. Ninth-grade physics must be taught without the usual emphasis on algebra. This does not mean mathematics is not important; an essential element of conceptual physics is for students to learn why and how mathematics empowers the learner. However, grasp of concepts is key, and the use of these concepts in chemistry and biology is promised. The broad application of such laws as those of motion and gravity is also a feature that is natural to physics and very difficult in ninth-grade biology.

The deep connections between disciplines imply a profound change in professional development as well. I suggest that an estimated 20 percent of teachers' time should be devoted to collegial interaction devoted to creating new learning strategies. Part of this discussion should focus on the need for storytelling. Using narrative makes it possible to explore science more fully: how it works, how it doesn't work, the nature of science, some of its history, and something about who does it and how it is done. This approach will reduce the content in each of the disciplines, but it is an essential trade-off.

The United States is unique among the world's nations in its absence of centralized educational management. We have 50 states, 16,000 school districts, and 25,000 public high schools. In the twenty-first century, there is a crucial need for coherence in a national education strategy that will educate a twenty-first-century citizenry and a twenty-first-century workforce to maintain the economic strength and cultural level essential to a great nation. A revolutionary update of our antiquated approach to teaching science is a great place to start.

Leon M. Lederman is director emeritus of Fermilab, in Batavia, Illinois, and is Pritzker Professor of Science at Chicago's Illinois Institute of Technology. He has served as president and chairman of the American Association for the Advancement of Science.