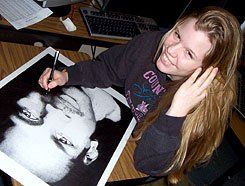 "You are only as strong as the weakest piece in your portfolio," Doug Martin frequently tells the eleventh and twelfth graders in his graphic design and illustration classes at the Mingo Career & Technical Center, in Delbarton, West Virginia.

If his words sound harsh, it's because Martin doesn't want to cloud the truth: There's a lot of competition out there, and teenagers should understand that the schoolwork they complete today will help define their prospects tomorrow. "The students need to know that the goal of the class is a professional portfolio for employment or college," he says.

Requiring students to compile their work also reinforces Martin's lesson plans, prompts self-reflection, and fosters peer collaboration. Although it's possible to do all this on paper, Martin prefers digital media, which not only help students develop computer skills but also allow them to easily share their work with peers, mentors, admissions officers, and potential employers. This format also enables teachers to take advantage of newer collaborative Web tools, such as Google Apps Education, which can make teamwork easier.

Students can organize portfolios, like résumés, in various ways, but generally, two effective styles for students are showcase and learning portfolios (also called workspace portfolios). Showcase portfolios, such as those produced by Martin's students, display their best work to demonstrate the achievement of specific goals or educational outcomes. Learning portfolios, on the other hand, can comprise a student's entire body of work and document learning over time.

Martin represents a growing cadre of educators who see value in having students build digital portfolios. He attributes the trend in part to students' fascination with the Web, particularly social-networking sites such as Facebook and MySpace and file-sharing sites such as Flickr.

"Gen-Y students love Web community," he says. "They live for collaboration and instant feedback." Plus, much of the software required to assemble a digital portfolio is available free, making the technology accessible to anyone who wants to use it.

In the rural coal-mining town where Martin teaches, he says, students often find it hard to imagine themselves attending college and pursuing professional careers. Digital portfolios allow them to expand their horizons and provide them with more opportunities to receive constructive criticism, college scholarships, and job offers.

"Students need to know that an employer doesn't always care about the name of the college or high school on their résumé," Martin explains. "Employers would rather see the quality and professionalism of the work in their portfolio." 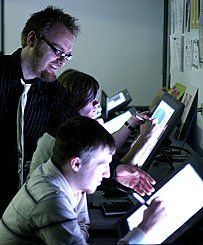 Martin should know. Back in 1991, when he was a senior at Burch High School, right next door, he didn't think he was smart enough for college, because he was an artistically inclined student in an academic setting that embraced only the three R's. But his aversion to working in the coal mines, as his father did, propelled him to attend Concord and Marshall universities in West Virginia, where he earned bachelor's degrees in graphic design and fine arts and then a master's degree in education.

His background as a fine artist and computer graphic designer helped him land a graphic design job at Walt Disney Imagineering, but teaching was never far from his mind. He returned to his rural hometown six years ago to pursue his passion.

"I always wanted to teach students that were like me, the students that teachers overlooked because they weren't the type who excelled in traditional classrooms and who maybe thought they couldn't survive the rigors of a college education," he explains.

As a teacher, Martin takes an active role in introducing students to the idea of attending college. He requests information from colleges, invites guest speakers to class, investigates admissions and scholarship criteria, and inspires students to create stellar portfolios. To date, his students have won more than $1 million worth of scholarships, a feat he attributes to the strength of their digital portfolios.

Nathan Ward, a junior at the Mingo Career & Technical Center, says the Flickr portfolio he created in Martin's class has helped him hone his photography skills and land paid freelance assignments from contacts he's made on the Web site. "Flickr is such a big place for artists to display their work," Ward says. "I've learned a lot of what I'm doing by seeing what others can do and seeing what works well in the pieces they do."

Ward aims to go to art school to get a degree in graphic design or photography. Wherever he goes, he's taking his portfolio with him. "It's helped me a lot already," he says, "and I know it will keep helping me."

Digital portfolios are a somewhat obvious choice for students of the visual arts, but they can serve students of other subjects, too. Last year, seniors at the Boston Community Leadership Academy published multimedia reports on the Web to publicize their ideas about youth activism and community change.

The New Hampshire Department of Education requires all the state's school districts to give seventh and eighth graders a chance to demonstrate their computer literacy by submitting digital portfolios. And at the Key Learning Community, in Indianapolis, all high school seniors must document personal and academic growth over the course of four years with digital portfolios that contain everything from writing samples to service-learning projects. 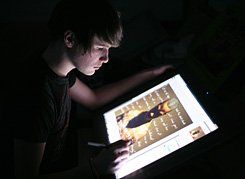 Colleges, too, are starting to consider digital portfolios during the admissions process. Zinch, a Web site that launched in 2007, offers students a place to strut their stuff for college counselors.

More than 500,000 high school students from 23,000 schools worldwide have created free profiles on the ad-free site, which charges colleges for access, to highlight their sports, artistic, academic, and community involvement. Their video clips, writing samples, and artwork bring the site's mantra, "I am more than a test score," to life.

Some colleges have incorporated social media into their recruiting efforts by launching Facebook applications (see Plattsburgh State University's page) and MySpace profiles (such as the University of Scranton's), but because those sites were designed for communication among friends, many students don't feel comfortable interacting with college admissions officers there. The text, photos, and videos students post on social networks tend to be more casual than the content of portfolios published on Zinch.

Students can use Zinch's "shout out" function to contact representatives from hundreds of colleges recruiting on the site. Admissions officers may also browse student profiles and communicate with promising recruits via the site's messaging system and forums.

"We wanted to level the playing field and give students a way to overcome some of the stigma around scores in college admissions and high school,'" says David Blake, Zinch's finance director. "The kids can say, 'Take me or leave me, but do it for who I am, not my test score."

Nancy Repreza, a senior at the Academy of Arts and Minds Charter High School, in Coconut Grove, Florida, says Zinch helped her take a more active role in the college-selection process. She's posted performance pictures, essays, and acting and writing awards on the site to bring attention to what she's most enthusiastic about and to attract the attention of college representatives who are seeking students like her.

"I've shouted out to a couple of admissions officers, and they've written back and signed me up to their mailing lists and sent me more information that otherwise I wouldn't have gotten," Repreza says. "I thought the process was, you send in your application, they look over it, and then they tell you if you're accepted or not. I never knew you could speak one-on-one with admissions officers and ask them questions."

Some schools have been slow to join the digital-portfolio trend, in part because teachers fear being outsmarted by students online. Their fear is unjustified, says Kathleen Blake Yancey, an English professor at Florida State University, who cofounded the Inter/National Coalition for Electronic Portfolio Research. Yancey says the biggest misconception that K-12 teachers have about digital portfolios is that they need to master the technology before beginning such projects with their students.

"Often, teachers believe that their technological skills are less well developed than those of their students, and they are often right about that," she says. "But electronic portfolios are really about learning, and teachers know plenty about that."

Yancey's advice is to begin with a single class, the one in which you have the most success, and invite students to learn with you. "Students love to take the lead," she notes. "They find technology engaging and motivating, and they respond well to situations in which they are the experts."

Helen Barrett, an electronic-portfolio researcher and consultant, has documented several categories of tools teachers can consider. These range from software programs such as Microsoft PowerPoint, which they can use to create portfolios offline, to Apple iMovie, which can be employed to create digital stories or artifacts.

Then there are free Web services such as WordPress, a blogging service, and Google Apps. Various companies offer ready-made solutions for creating digital portfolios that allow students to upload their work into predefined templates, or collaborative Web-based tools.

"Students who are used to going on MySpace and Facebook get frustrated with a tool that won't let them express their personality, and a lot of the commercial tools don't have personal expression as a high priority," Barrett notes. "Web 2.0 tools are built on an architecture of participation and the ability of learners to personalize their own online space."