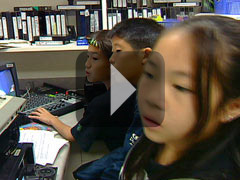 "He was running like an angry dog chasing the mailman. He could hear the booming getting louder and closer. Horses came into view and Tommy almost fainted. Clumpy clumpy went the rampaging horses." --Tamlyn

"Finally it was here the wave in all his dream. It was swirling and twirling! The tsunami came crashing over Tom's head. BOOM went the wave. Tom couldn't even breathe. Tom went down into the deep cold sea." --Quinn

There's no shortage of vivid description in stories from Linda Mitchell's third-grade language arts students at Nuuanu Elementary School in Honolulu. And Mitchell thinks that happy circumstance may have something to do with giving her students a number of ways to come to the writing, including through technology.

Before Tamlyn and Quinn did their descriptive writing, they created storyboards about the action they wanted to represent in an assignment on "expanding the moment" -- making the story more intense by describing a fleeting instant in great detail. From their storyboards, they each created a computer animation of the action. Frame by frame, the animation in turn sparked their imaginations and helped them create word pictures. "It gives you ideas about what you see," says Quinn. HyperStudio and Kid Pix were among the computer programs they used.

"What the animation does is it assists the children in visualizing the action," explains Mitchell, who teaches language arts enrichment classes. "The animation is a way of them developing the picture so they relate that to the writing, to what they hear, what they see, what they feel." Technology, she adds, "gives you one more way of teaching something."

At Nuuanu, a 400-student K-6 school situated in a misty green mountain valley above downtown Honolulu, technology is prevalent, thanks in large measure to the school's former principal, Eleanor Fujioka, and technology resource teacher Kelvin Chun. Fujioka pushed for and got funding -- from parents, grants, the district, and others -- for an impressive array of technology, including a closed-circuit television studio. Chun, who has received numerous honors, including being named one of USA Today's 24 Outstanding Teachers in the Nation in 2000, has made it his mission to help teachers incorporate technology into their instruction in a way that makes the final product more interesting and memorable, both for the student and for the audience.

The current principal, Clayton Kaninau, is as dedicated to technology as his predecessor, whether it's having students run their own daily closed-circuit and often interactive school news program or having them use technology to work on real-world problems.

"Looking for real-world relevance has to do with students being interested in what they do, knowing that it's useful outside of school," says Kaninau. "The experiences are not contrived or in isolation, but they're a part of a larger learning activity. Without those connections, it won't be meaningful, and it'll be forgotten tomorrow."

Students interviewed relatives about their lives before and after settling in Hawaii. Answers to questions such as, "What foods did you eat?" and "What did you do for fun?" were used to create a multimedia presentation.

Nine-year-old Matthew couldn't agree more. He is interviewing his grandfather for an assignment on biographies. "What kind of job did you have when you were in Japan?" "How much did you get paid?" "What was it like going to work?" he asks. Matthew will write an essay about his grandfather and use HyperStudio to illustrate the essay with drawings and photographs on a Web site. Matthew says he realized he was accomplishing a number of goals: learning about a different country, learning about a different era, learning more about using the computer, and, most important, "knowing my family history."

The technology, according to Principal Kaninau, is an essential part of real-world learning. If students "are not using the technology when they get into the outside world, they're going to be that much behind," he says.

From the look of things at the school, Nuuanu graduates won't have any trouble understanding major issues of the day or fitting into the twenty-first century.

In the library, first graders are following the progress of Miss Junie 2, an endangered sea turtle they adopted (for 85 cents each) from the Caribbean Conservation Corporation (CCC). Miss Junie 2 started her trip in Tortuguero, Costa Rica, and students regularly click onto the CCC site to check her movements as tracked by satellite and then write about her travels and ocean life in journals. Teacher Erin Okata integrated social studies, language arts, science, math, fine arts, and technology into the project as a way to help students develop an awareness of ocean life and to meet specific Hawaii state curriculum standards.

Students share their school experience on Nuuanu's Web site. Video from field trips, pictures of events, and student work are all displayed for peers and community to see.

The rich technology of Nuuanu is well illustrated on the school's chock-full Web site. Besides the typical announcements, daily menus, and special-occasion pictures, there is an archive of student work from as far back as 1997. Included is documentation of a pioneering 1999 videoconference with a mainland TV station as well as a 2003 student-produced video of a third-grade project, a native Hawaiian plant garden.

Through narrative and video, students take viewers on a detailed survey of the garden project -- determining its purpose of beautifying the campus and preserving native species, consulting local plant experts, seeking plant donations from the local government, enlisting digging help from a parent. "The best part of this project was getting our hands dirty!" says the student narrator. The project crossed a number of disciplines -- English, science, math, technology. Students wrote letters to local officials as well as the script for the video. They learned about different soil types and the oxygen and other needs of plants, created schedules for optimum watering and learned why one schedule was better than another, and developed multimedia projects to share what they learned. The students also created a form indicating how their project should be judged relating to state communication, writing, and technology standards. Their classmates filled out the forms during a presentation of the HyperStudio projects and then the students collected the forms, tallied them, and turned them over to their teacher for a final grade.

A sixth-grade field trip to three water sites -- the ocean, a river, and a small stream near the school -- puts the students in true scientific mode. Clipboards in hand, the team members (leader, materials keeper, recorder, timer, and checker) consulted each other while doing their individual tasks. "I like this," says Marrissa, waiting for a boot-clad peer to report readings of a water sample. "You get to work together." Students took readings for acidity, carbon dioxide, nitrates, and phosphates at all three sites as part of a comparison of the quality of water as it left the pristine mountains and headed toward civilization, with its pollution, trash, and sewage. Overheard conversations at the field sites, which included wading into a bay within site of Waikiki, went like this: "It's a crab." "Get it, get it, get it!" "Eight millimeters of dissolved oxygen in water." "There's not much phosphate." "Good." "No, that's bad." "Boy we're good!"

"Our field trip allows the sixth graders to consider the limited resources and fragile environmental conditions in Hawaii," says the student narrator of "Malama I Ka Wai A Me Ke Kai" ("Care for the Water and the Sea"). "It allows firsthand experiences in the exploration and observation of the common plants and animals that live in our tropical waters. Students are introduced to scientific classification such as phylum, genus, and species." They wrote descriptions of the location and made a sketch. At the ocean, they created a specimen pond to hold some of the creatures they caught. After they took notes on the creatures, they gently returned the plants and animals to their saltwater home. "This is better than class -- way better," pipes up Lauren.

Hands-on work, like this neighborhood water sampling project, gets students excited about academics.

A Force for Academic Improvement

"They love it," says sixth-grade teacher Geraldine Kajitani. "If you start with ... hands-on activities and things that are fun, their attention is focused." And once that happens, she says, it's a snap to get them to study some of the drier material because they'll relate to it and remember it.

The students also get a boost because they work alongside real professionals, who refer to the student documentation in their own work because they don't regularly monitor the Nuuanu Stream. "We find [their data] very important because we don't basically have that baseline information," says Watson Okubo, an environmental health specialist with the Hawaii Department of Health. He lets the students know they're doing just the kind of work he does. "They have about a fifteen-year record," says Okubo, "and by looking at the organisms and different species -- the diversity -- they can figure, 'Gee, things are getting better for the fish or not.'" In fact, he says, while water quality has improved "quite a bit" over the past fifteen years, fish life has been declining because of overfishing. By the time the project is complete, "they have a feeling that this is not just lessons; this is real life."

Nuuanu Television News also mirrors what the kids see adults doing, and at Nuuanu everyone gets a chance to participate. Kindergartners are the weatherpeople. First graders do book reviews. Student-filmed and -edited videos are offered. Students in the other grades may do public service announcements or anchor a session with "Tutu Nanny" on a character trait such as responsibility or respect. Or they may do the production -- one at the camera, another in charge of audio, three others at the controls trying to make sure "b-roll" -- pre-taped video -- goes on the air when the anchor introduces it and that the on-air "talent" are following the cues.

The regular daily news also has an interactive element, with students asked to answer questions such as "What day is Easter?" The two students from the lower and upper grades who punch in the first correct answers win balloon art made by technology teacher Chun, who is also a magician.

Teacher Marjorie Tupper says the addition of technology has given all students a chance to excel. Students who might "falter with pen and paper," she says, suddenly have a new outlet that lets them express their knowledge through art, through audio, through ways limited only by the students' imaginations.

"Our students are living in the twenty-first century. They grew up with the technology," adds Chun. "We need to teach them to be problem solvers, how to be lifelong learners, how to go out in the world and utilize this technology."