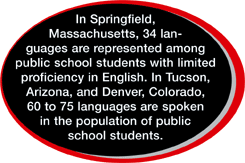 In the ongoing debate over how best to educate the rapidly growing numbers of English-language learners (ELL) entering America's classrooms, the experts all seem to agree on one point: Teachers are unprepared for the challenge.

How unprepared? It's difficult to say with any precision, because the number of English-language learners, the complexity of teacher requirements, and how preparedness is even defined varies greatly from state to state. But if a May 2005 study of California teachers, called "Listening to Teachers of English-Language Learners," is any indication, the answer is "very unprepared."

"Teachers reported not knowing how to address their English learner students' needs while meeting those of non-English learners in the same class," says Julie Maxwell-Jolly, a senior researcher at the University of California at Davis and coauthor of the report. "They expressed frustration over not being able to communicate with students and parents, lack of appropriate materials, and a lack of accurate information about exactly what academic content their students already know and what they need to learn."

According to the study, 43 percent of teachers whose classes consist of a majority of English learners received no more than one inservice training session in the past five years on how to instruct these students. And even though new teachers in California have been required since 1999 to receive special training for instruction of English learners, just half reported actually doing so. Still, the state's requirements for incoming ELL teachers are among the strictest in the nation. In addition, though the state is home to the lion's share of the nation's young English learners (1.6 million in 2003-2004), the number has been growing relatively slowly, giving educators slightly more time to accommodate them.

If California is struggling, how much more so are places such as North Carolina and South Carolina, which have seen a whopping fivefold increase in English learners over the past decade? No fewer than nineteen states have experienced a 200 percent increase in the number of English learners in the same period, according to a state report by the National Clearinghouse for English Language Acquisition (NCELA), a service of the U.S. Department of Education's Office of English Language Acquisition (OELA).

The speed and degree of this influx caught many school districts off guard. Whereas the national ratio of ESL-certified teachers to English-learner students is 1:44, in South Carolina it's more than ten times that number, according to a 2002 OELA report. "Many of these states are not traditionally known for having programs serving these students," says Cynthia Ryan, director of the OELA's professional-development division. "So, we have a growing number of teachers who have English learners in their classroom but who have little or no preparation."

The good news is that when teachers do receive adequate training, they're more confident and successful at teaching English learners.

One of the most obvious ways to better prepare teachers for the ELL challenge is for states to not only require, as California does, that incoming teachers arrive prepared to instruct English learners but to also, unlike California, actually enforce those standards. The challenge here is making sure credentialing programs themselves are equipped. Though most certification programs have a track for bilingual education, their expertise often isn't shared across the board. So, a professor who is training, say, science teachers may not know what strategies to employ for teaching science to ELLs.

Providing teachers with more professional development is another solution. NCES data from 2000 shows that among teachers with ELL students, only 12.5 percent received more than eight hours of training over a three-year period. That's simply not enough. "Professional development needs to be sustained, it needs to be coherent, and teachers need to be supported as they try to enact what they're learning in the classroom," says Nanette Koelsch, senior research associate with WestEd, a nonprofit research, development, and service agency.

One school district that has taken the approach Koelsch recommends is New York City's. Troubled by the high dropout and failure rates of NYC's 144,509 students receiving ELL instruction, the New York City Department of Education in 2002 hired 107 full-time ELL instructional-support specialists and enlisted WestEd to provide a three-year comprehensive professional-development program as part of a $20 million package of reforms. Instead of receiving merely a couple hours of training, the specialists spent five full days learning tools and techniques for teaching NYC educators who participate in WestEd's Building the Base program.

Obviously, few school districts have Big Apple resources, but Maxwell-Jolly suggests that most schools, as well as districts and states, can set aside more of their existing professional development funds to prepare teachers to work with ELL students. In addition, financially strapped systems can apply for grants designated by the No Child Left Behind Act to pay for programs that improve instruction and assessment of ELLs. Maxwell-Jolly also suggests providing incentives for teachers with ELL expertise, such as an extra preparation period, or giving them time to mentor other teachers in these tools and techniques.

Ultimately, using a combination of approaches rather than a single strategy is likely to prove most effective in helping teachers get the training they need to feel confident they are providing all their students with the instruction they need to succeed. Considering that the number of English learners is continually rising, change can't happen soon enough.

Jenn Shreve writes about technology and popular culture for a variety of publications.