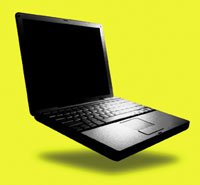 Scan the classrooms, labs, and libraries of Empire High School and you'll find laptop computers, digital projectors, and wireless connections, but nowhere in the specially designed facility just outside Tucson, Arizona, will you find a textbook. No 30-pound backpacks, no armloads of classics, no future lumbar cases for chiropractors serving the neighborhood surrounding this outpost of the Vail Unified School District, in Vail, Arizona.

Beginning this year, 350 students will attend Empire, the state's first completely wireless, all-laptop school. (If the plan works, the school hopes to grow -- eventually to a student body of 750.) This doesn't mean they won't have access to texts: Through their Apple iBooks, students will be able to read any number of electronic texts, including traditional classroom tomes, but teachers will also assign them to read up-to-the-minute news articles and other e-media to support their studies.

As revolutionary as it sounds, Empire is clearly not the first school to outfit its students with computers. Many classrooms and, in some cases, entire counties have supplied laptops to support curricula, and reports from such projects -- in Illinois, Maine, New Hampshire, and Virginia -- have cited dramatic improvements in student engagement, reduced absenteeism, and fewer discipline problems. What distinguishes Empire is that the facility was designed from the ground up specifically for this program. Says school district superintendent Calvin Baker, "It's not a retrofit."

It isn't cheap, but once you do the long-term math, it makes sense. At about $850, a laptop costs much more than all the textbooks required for a student's course schedule (high school books average about $50 each). But the information accessible online is always up-to-date, unlike that found in older schoolbooks. Empire administrators acquired the schools' computers from Apple on a lease-to-own basis, using money from state and local taxes, builder contributions, and profit from a land swap -- in other words, the kind of scraped-together funding not every school district can manage.

Once they had the hardware, Empire's planners needed teachers with an interest in the new approach -- and the tech skills to facilitate it. So far, Baker says, the plan is working well for teachers and administrators. He quotes one teacher who described the school's array of new opportunities as "the difference between swimming in a pool and swimming in an ocean."

"They've embraced the whole enchilada -- the vision of the digital school," says Scott Morris, program manager in education marketing at Apple, who helped Empire design its program once the school purchased the laptops. "[Empire is] out in front of where we see schools being in a few years."

Being in the vanguard also has its drawbacks, like dealing with a healthy dose of skepticism. "We've had to answer the obvious questions: 'What do you do if a computer gets broken or stolen?' 'What about pornography and iChatting?'" says Baker. "We've had to deal with those issues, but they just haven't been big enough to deter us." (For the record, parents pay $54 in insurance against broken or stolen computers, and the devices have been set up without iChat capability, and with pornography sites and most game sites blocked.)

If anything keeps other schools from following suit, it is likely to be funding, not logistical issues, says Stephen Driesler, executive director for the school division of the Association of American Publishers. Though more and more laptops are making their way into students' hands, he says, financial realities will keep this trend from becoming commonplace anytime soon. "All the major [textbook] publishers have the capacity to deliver the content electronically. The only reason the majority of schools still use printed textbooks is because that's what the demand is," said Driesler. "Do I think it's going to become a major trend over the next few years? No, I don't."

Nevertheless, Baker sees too much virtue in Empire's program for it not to spread. "If you talk to teachers, they tend to talk about the continual confinement of their profession because of No Child Left Behind and continual testing -- it's like a straitjacket," he says. "Well, allowing teachers to use digital media instead of a prescribed textbook is opening up all kinds of creativity for them, and empowering them to do all kinds of instruction."