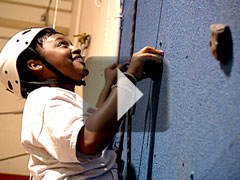 The warm-ups in C.J. Healy's freshman physical-education class at San Rafael High School are decidedly old-school PE. "OK, get ready for jumping jacks," she calls out to thirty adolescents in shorts and school T-shirts, many looking out of sorts and, to be honest, out of shape.

With its fading championship banners, the gym of the deco-style, 1,000-student high school, twenty miles north of San Francisco, seems familiar even to a reporter whose last encounter with calisthenics came during the early 1960s New Frontier fitness craze. The recorded soundtrack, a hopeful energy booster, is far more old school than new, with Bruce Springsteen segueing into the Kinks.

"Great," Healy says, encouraging her still-unenthusiastic class as the warm-up of jumping jacks and lunges ends. "Let's go to the Adventure Room." Clearly, magic words. Suddenly, the kids perk up; their interest level takes a multi-generational jump forward to an exercise regime that is as new PE as the jumping jacks are old.

The room was once the wrestling venue, but instead of much-abused mats, it now holds a highly sophisticated facility that aims to achieve the optimal balance between old-style physical rigor and New Age interpersonal cooperation. Named after Bill Monti, the creator of the course and the school's former PE head, the Adventure Room contains an extensive rock climbing wall and a wide range of intricate rope and wire climbing and rappelling elements.

When Healy instructs the class, "Go to your climbing stations," the kids respond with a start-your-engines kick that erases the impression left by the lackadaisical warm-ups. The room swirls into controlled chaos as kids grab helmets and safety harnesses. After six weeks of ground-based skill and safety training, each member of the class has an objective that matches his or her interest and skill level. Bill Monti's motto, "Challenge by Choice," is still the Adventure Room's credo.

The concentration is palpable and, for fourteen-year-olds, a little disconcerting. Some kids tie intricate knots around lines used to scale the 25-foot walls. Others begin hooking their safety ropes. A few begin climbing the various rock-wall features, while others begin a collective climb inside a "chimney" mounted 15 feet up on another wall. Others tie off their lines and begin to make their way up a pyramid-shaped wood-and-wire ladder. Their objective: reach and traverse a narrow bridge suspended just beneath the 25-foot ceiling. When a student climbs, a spotter makes sure the safety rope is taut, so a misstep won't cause a fall. (Later, the role between climber and spotter will be reversed.)

Within minutes, a tribe of fearless junior Spider-men defies gravity on the way up, over, and along artificial rock faces. With the period ending, kids seem reluctant to come back to earth. After class, Healy notes that the Adventure Curriculum, a requirement for San Rafael High School freshmen since 2006, has become a favorite of teachers as well as students. "One instructor came up to tell me that her freshmen were acting more grounded and mature than seniors who never had the chance to take the course," she adds.

Principal Judy Colton, a former PE instructor, is a major booster of the Adventure Room program, which she says exemplifies what PE must do -- "Build self-esteem, develop problem-solving skills, teach cooperation, and present interesting challenges."

Shape of Things to Come

In San Rafael's program, we see the past, the present, and possibly the future of physical education. Like many other schools, San Rafael is creatively trying to confront a need for physical activity that is immediate and drastic. Despite bright spots like the Adventure Curriculum, the news on the American youth front is dismal.

The 2001 Shape of the Nation Report from the U.S. Centers for Disease Control and Prevention revealed that only 40 percent of states mandated a minimum number of PE minutes per week. The CDC reported that between 1991 and 2003, the percentage of high school students enrolled in daily PE classes dropped from 42 percent to 28 percent. The study also showed that while 70 percent of high school freshmen attended at least one -- generally required -- PE class a week, that number dropped to 40 percent by senior year. At the same time, according to the CDC, America's fast food diet and sedentary lifestyle has led to a quadrupling of the number of overweight children ages 6-11 since the 1960s.

There is some good news, however. In 2005, forty-four states voted to mandate that students spend a required amount of time in PE class. Unfortunately, even in a program as active as San Rafael's, a phenomenal amount of time in PE class is spent without anyone actually getting physical. One report found that at an elementary school in Texas, students were active only three and a half minutes during an entire forty-minute class.

So, what has gone wrong with American PE? According to Len Saunders, a New Jersey-based physical fitness expert, "The major problem is the lack of support from the adult community." Why has this happened? Saunders, founder of the annual ACES (All Children Exercise Simultaneously) and PACES (Parents and Children Exercise Simultaneously) events, says, "It is because adults associate PE with the dodgeball they beat each other up with as kids."

The PE crisis is real and undeniable, so much so that America has reached one of those fitness moments of truth that periodically bring calls for a new PE back into national focus. In the 1970s, the focus was on movement education, centering on kinesthetic exercise. In the '80s, reforms involved a number of subspecialties such as applied exercise science, exercise physiology, sport pedagogy, and fitness and wellness training. Recently, the newest new PE has focused on humanics, a philosophy that views physical education as the only subject that engages all three of the critical domains of education: the cognitive, the spiritual, and the physical.

Humanics is the official approach at Springfield College, a teacher's college in Springfield, Massachusetts, that is the West Point of American physical education (and the hallowed ground where James Naismith invented basketball). The goal of humanics, says Diane Lorenzo, an associate professor of physical education pedagogy, is to use PE "to get students to become lifetime movers." This is more easily said than done, Lorenzo acknowledges.

Even the best-intentioned PE programs need to be tempered by the knowledge that they must compete in a world of ever-smaller budgetary pies, and are usually considered lower priorities than core assessment courses. This reality has transformed PE scholars like Lorenzo into budgetary pragmatists who urge their students to "sell" PE to parents, PTOs, and particularly fellow teachers. "We need to reach out to the community much more than ever before," Lorenzo says.

Ratey devotes part of his new book, Spark: the Revolutionary New Science of Exercise and the Brain, to the PE program at Illinois' Naperville Central High School. Naperville has instituted one of the nation's most intensive PE curricula, with each student required to attend a daily, rigorous forty-five-minute gym class. Test results from 2002 found that only 3 percent of the district's students were overweight, a remarkably low number. To prove the point, Naperville finished sixth in math and first in science in the 2001 Trends in International Mathematics and Science Study (TIMMS) exam, a test dominated by Asian and Eastern European students.

Given financial realities, Naperville's programs may not be scalable; but they offer an ideal picture of the new PE, some parts of which most schools can adopt. The town's Central High School boasts weight-training, cardio, and aerobics facilities, respiration monitors, state-of-the-art computer video fitness devices, a dance room, swimming and diving pools, a rock-climbing wall, and a high-ropes course. Schools without such enviable resources can still get creative, utilizing programs like those endorsed by Springfield College's Diane Lorenzo, that emphasize integration with other school departments. According to Lorenzo, if a history class is studying medieval Europe, "the PE department can create a series of coordinated, related PE courses in archery, juggling, and orienteering." Obviously, for any school, jousting is a budget breaker.

Yet all the interdisciplinary creativity in the world cannot overcome the starvation diet confronting many PE programs. This fact becomes obvious when schools, as they sometimes do, revert to the ploy of turning the keys to the gym over to a history, biology, or math teacher. It is then this person's job to pass out balls and baby-sit the class as it plays a spirited or spirit-killing game- -- depending on your relative PE progressiveness -- of "murderball," as dodgeball is known in a number of PE circles.

One of the most outspoken critics of old PE's do-or-die mentality is Neil Wilson, a professor of physical education at Eastern Connecticut State University. Wilson has created what he calls "the PE Hall of Shame." Into it he puts games like dodgeball or duck, duck, goose, even musical chairs -- "any game where kids get eliminated," he says. Wilson acknowledges that there are those who consider his philosophy of PE politically correct, "communist, and un-American."

What he is trying to do, Wilson says, "is to get PE teachers to think about whom their work can benefit the most." The clear answer, he believes, "is the overweight and weak." Traditional PE, he says, "is designed for kids who are athletic and will succeed anyway." Wilson is also a critic of what might be called the "full employment for coaches" program, under which PE teachers are hired primarily for their ability to coach organized sports. He contends that coaching and PE are a poor mix, because coaching "drains you as a teacher." Physical education should never be about team sports, Wilson says, but rather should be the catalyst for developing a student's individual and lifelong sport and recreational interest.

Although instructors and medical and educational experts decry any moves to further weaken public school PE, there are in fact private programs that, if necessary, can fill at least part of the physical education gap. One possible private model is the Riekes Center for Human Enhancement. This 50,000-square-foot facility in Menlo Park, an hour south of San Francisco, tailors programs to meet the individual needs of its participants.

Gary Riekes, the program founder, is a former Stanford University football player who believes that the center can be thought of as a "secret school" that uses a wide array of athletic equipment, coaching expertise, and coordinated arts, music, photography, and nature-study programs as incentives to improve academic performance. Students at the center range from young teens with behavioral problems to star athletes training for professional sports careers and Olympic try-outs. All Reikes Center students, regardless of their physical gifts, get equal attention, and the program puts a premium on students helping teach others.

The Riekes program, nearly two decades old, is today affiliated with a number of local public and private schools that use the center's resources, and its philosophy, to expand their own PE classes. Again, this sort of outsourcing may not be fiscally possible, but in places like Naperville, San Rafael, Springfield College, and Riekes, a revolution is brewing. And as new ideas are brought into schools by students and teachers who have seen the future, physical education is going to work -- for everyone -- in new and better ways.

And not a minute, or a jumping jack, too soon. 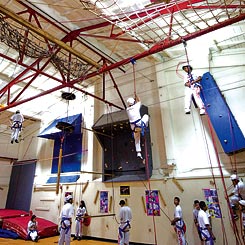 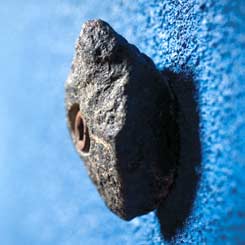 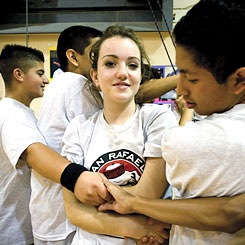 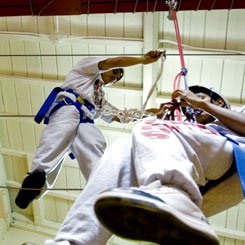 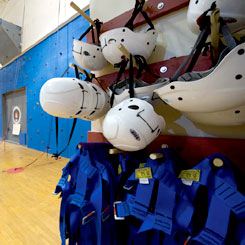 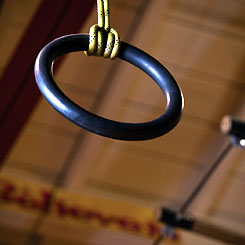 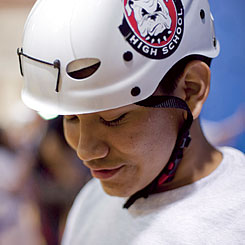 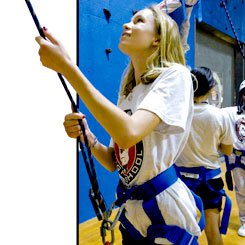