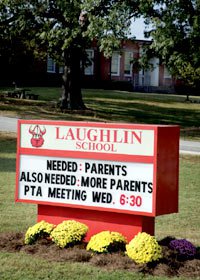 Enter any public school in the country and you'd be hard pressed to find an adult who isn't familiar with the No Child Left Behind Act (NCLB), the landmark education law signed by President George W. Bush in 2002. In the nearly four years since its passage, the NCLB has been analyzed, criticized, defended, and reassessed with numbing regularity in thousands of newspaper articles, academic papers, and professional workshops.

Though much of the controversy and legal action around the act (see "It's Revolting") has raised tempers, it has not increased awareness or led to a greater understanding of the multiple aspects of law. Far from it; key portions of the NCLB are all but ignored.

Ask a parent, teacher, or school administrator about the NCLB and most likely they'll launch into a discussion -- or, often, a rant. For critics and supporters alike, much of the focus of schools, school districts, and states has been on the law's so-called high-stakes aspects: testing and accountability.

But will anyone talk about its mandate that parents must be involved in not just the day-to-day happenings at schools but also in the difficult and important work of school restructuring?

Will anyone mention that districts and schools are responsible for making sure that all teachers obtain the professional development and ongoing support they need to effectively teach to a diverse group of learners?

Will anyone comment on the need for states to develop plans to ensure that poor and minority students are not taught by a disproportionately high percentage of new and inexperienced teachers?

Probably not. Instead, schools have poured their time and energy into preparing students for their annual tests, a factor that has the most severe and immediate penalties for not meeting goals. Schools that receive federal funds can be subject to major sanctions -- up to and including reassignment of teaching and administrative staff -- if too many students consistently score below grade level on standardized tests. For some educators, this edict has meant an intensive redesign of their curriculum and instruction to better meet the needs of all students. For others, though, it has devolved into little more than drilling, or what detractors call "teaching to the test."

But the NCLB does more than offer a passing nod to the importance of parent involvement; it mandates it. The lure is held out in the form of Title I funding -- federal money distributed to states and then to schools, based on their percentage of low-income students. Every school receiving such monies must have a documented parent-involvement policy that parents themselves help create. In addition, schools that collect more than $500,000 in Title I funding are required to set aside 1 percent of their allocation to pay for programs to reach out to parents and help them develop the skills they need to become partners in their child's education. These include home visits by teachers as well as parental workshops on reading or math strategies.

The NCLB also includes unprecedented public-reporting requirements, mandating that schools disclose critical information to parents about teacher qualifications (such as whether a substitute or a noncredentialed teacher is teaching their child's class), as well as individual and schoolwide student-achievement data.

For schools designated as in need of improvement (because not enough students are performing at grade-level academic requirements), the law extends the definition of parent involvement even further: Those schools must notify parents of the "needs-improvement" designation and, more importantly, must, according to the act's language, "involve parents in the ... process of school review and improvement."

Mandating parent involvement -- or any other reform strategy, for that matter -- is a lot easier than implementing it. Though some schools have created programs and strategies to ensure that parents truly are partners in school reform, the examples are far too few, says Arnold Fege, director of public engagement and advocacy for the Public Education Network (PEN).

"The parent-involvement piece gets the least attention, the least money, and the least personnel staff," says Fege, author of several reports on the NCLB.

Some schools and districts, however, are bucking this trend. In Petaluma, California, for example, the school district convened a community-wide meeting on standards-based education, bringing together parents, teachers, students, administrators, and school board members to create a shared vision for the city's high schools. The citywide dialogue was conducted with the assistance of Aurora, Colorado-based Mid-continent Research for Education and Learning (McREL), one of the nation's regional educational laboratories. It gave everyone in the community an opportunity to ask questions, share opinions, and voice concerns about such topics as local control, adequate resources, shared accountability, and the danger that standards-based education means a one-size-fits-all approach to teaching.

Across the country, in Worcester, Massachusetts, parents at University Park Campus School have worked closely with teachers and administrators since the school's founding in 1997, attending conferences, participating in school committees, and taking advantage of an array of parent-education resources available right on the school campus. Although the school is located in a neighborhood known for its high mobility rate, University Park's enrollment has remained relatively stable over the years.

"They've created a collaborative learning community," explains Tom Carroll, president of the National Commission on Teaching and America's Future (NCTAF). Although the city schools have an average mobility rate of 35 percent, University Park is bucking that trend, with a figure of 6 percent or less. "Parents with students at University Park don't move, because they want to keep their kids in the school," says Carroll.

If meaningful parent involvement remains a largely unfulfilled promise, the goal of having an effective, high-quality teacher instruct every student is equally elusive. Most states will meet the NCLB's decree that, by June 2006, all full-time classroom teachers are "highly qualified." But that does not mean every teacher will be an outstanding one, says Barnett Berry, who, along with colleagues at the Center for Teacher Quality (CTQ), conducted one of the first-ever studies on the impact of the NCLB on hiring and retention of great teachers. "The very provisions designed to increase teacher quality," the study notes, "are actually prompting states and districts to lower their standards."

Under the NCLB, the federal government gave states broad discretion in determining what constitutes a highly qualified teacher, requiring only that teachers have a college degree, demonstrate subject-matter knowledge (by passing a test or earning a major in the field, for example), and meet any state licensure or certification requirements.

Berry and others argue that the federal government's baseline standards are for a minimally qualified teacher, not a highly qualified one. "States are calling teachers coming through alternative routes with no experience teaching, and no track record, 'highly qualified,'" says Berry. "They're making no distinction between these teachers and a nationally board-certified teacher."

The NCTAF's Carroll agrees. "It's a static, limited notion of teacher quality," he says, that doesn't take into account, for example, the importance of knowing how to teach a subject or of creating a schoolwide culture that supports high-quality teaching.

A huge challenge for all districts remains staffing high-poverty, high-need schools with teachers who have the skills, training, and support needed to be effective in these most challenging of classrooms. Throughout the country, the least experienced teachers have historically taught in the highest-need classrooms. In a never-ending cycle that makes long-term reform nearly impossible, these schools become a training ground for new teachers, who stay a couple of years and then move on to schools with more resources and fewer challenges.

To address this imbalance, the NCLB requires that states develop plans to ensure that "low-income students and minority students are not taught at higher rates than other students by unqualified, out-of-field, or inexperienced teachers." Those requirements could have been powerful levers for change, but, say critics, as with parent involvement, staffing high-need schools with veteran teachers has taken a backseat to testing and accountability. Few of the districts visited as part of the CTQ study, for example, had made any changes in their recruitment and hiring practices.

Although the picture is mixed when it comes to realizing the promise of the NCLB, some hopeful signs stand out. State and national groups are increasingly documenting and sharing best practices -- programs and strategies that address the critical issues of parent involvement and teacher quality and effectiveness.

For example, a new group, the National Partnership for Teaching in At-Risk Schools, a collaboration of the Education Commission of the States, the Educational Testing Service, and Learning Point Associates, held a Webcast in September that brought together representatives from school districts throughout the country to explore how schools and states can recruit and retain experienced teachers in high-poverty, low-achieving schools.

They learned about the Clark County School District, in Las Vegas, Nevada, which has worked with the local teachers' and principals' unions to craft a plan that dramatically changes hiring and compensation systems at high-turnover schools. Principals at these schools get priority hiring, teachers earn increased pay, and new districtwide and school-based professional-development programs help educators develop the skills needed to be effective, creating a school culture in which teachers feel supported, respected, and part of a team.

Throughout the country, groups such as the Education Trust and PEN work with parents to deepen their understanding of the provisions and implications of the NCLB. The Ed Trust has an extensive collection of materials that cut through academic and legislative jargon, explaining for parents their rights under the act. Meanwhile, PEN has scheduled coast-to-coast forums to solicit feedback on what's working and what's not under the NCLB in preparation for an expected fight when the law comes up for reauthorization in 2007.

Finally, Berry, Carroll, and others are pushing for new definitions of high-quality teaching, backed by the resources necessary to realize these goals. "We need to set the bar much higher," says Berry, "and then create a national agenda to make it happen."