"Each kill site is different, but we treat them all like crime scenes," biologist Ken Clarkson notes as he hunches over a dead sandpiper. He is surrounded by an intent clot of students from Katie Kling's fourth-grade class at the East Palo Alto Charter School. Twenty-six nine-year-olds are taking what Clarkson calls a "NatureMapping bio-blitz," hiking though the salt marshes of a wildlife refuge that runs down to nearby San Francisco Bay.

This hike is a training element for NatureMapping, a wildlife data-collection and monitoring methodology that relies on school kids and other volunteers to help refresh inadequate inventories of America's habitats and species. Beginning in 1992, NatureMapping has grown into the nation's broadest, most complete computerized biodiversity database, offering unique species mapping capabilities. 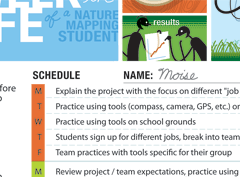 Along the trail, some kids are taking advantage of a respite from class. It is the second week of the program, and as Kling explains, some of the kids are "still getting used to being outside when it's not recess." Most of the fourth graders, however, are transfixed by their task, groups finding and identifying bird and animal tracks, kill sites, and various varieties of scat. "Scat," and its interchangeable synonym, "poop," are frequently mentioned, but there are very few "Eww, you touched it!" kid-stuff exchanges. This is serious science, and the kids find nothing icky about animal waste, which, they are learning, provides important clues for biodiversity exploration.

On this hike, Clarkson, instructor and director of the Nature Awareness Program at the Riekes Center for Human Enhancement, in nearby Menlo Park, California, is eager to see whether the class can find signs of two of the park's endangered species: the salt marsh harvest mouse and the California clapper rail. Pairs of clapper rails have been tagged, and their habits and flight patterns are being tracked through a tiny broadcasting collar.

Moises, one of Kling's star trackers, excitedly leads Clarkson to a pile of bones and feathers. "Moises finds everything," one of the kids exclaims as Clarkson analyzes the site. "I know who did it," he explains about this particular kill. "When a land mammal kills, it eats everything." Birds, according to Clarkson, are fussier, "plucking out the feathers before they gorge." This is definitely the site of a predatory bird kill, Clarkson says, pointing out a final clue: pellets of what he identifies as hawk scat. "This is really cool. I'm going to take some of these back with me," he tells the excited kids, who often bring back sighting reports for NatureMapping's biodiversity database.

Clarkson enters information about the bird kill on his CyberTracker handheld global-positioning-system devices. This is just one of dozens of animal finds by Kling's class that Clarkson will input during the hour-long outing. So intent are kids like Moises that they ignore Kling as she rounds up the students. Clarkson encourages patience: "We'll get it next time," he reassures.

As the kids trudge back to school, Clarkson explains how this exercise goes beyond exciting kids about natural surroundings. In addition, he says, he is using this hike to train students to become part of NatureMapping's lifelong cadre. Within weeks, Clarkson notes, kids like Moise will be as fully capable as adults at going into the wild and "telling us what they see and where they see it."

Since its founding in 1992, NatureMapping has grown from its origin as a small-scale Washington State nature program that enlisted retired resources professionals, zoo docents, and Audubon Society members as citizen-scientist volunteer wildlife reporters. Then, the tracking was done by hand, with reports mailed in to NatureMapping's Seattle program headquarters.

Today, the program has trained thousands of student volunteers in 11 states who make up a growing effort that relies on kids from third grade up to track, input data, and reporting it. Like Kling's class, kids involved in the NatureMapping program evidence a seriousness that compares to that of adult volunteers. "If you have a kid in the wetlands with a net," notes NatureMapping cofounder Karen Dvornich, "not only will that data be highly credible, but they'll also find it faster and better than you or I will."

This mass of new data has had the ironic effect of casting doubt on earlier records, which, according to Dvornich, show that the majority of wildlife was found "running along roads." It seemed that early data collectors tended to take the lazy way out, staying close to roads and trails and often skipping private property and farms that made up a huge amount of relevant natural areas. This lack of adequate data has even had the effect of discrediting field guides based on this flawed information. Today, according to Dvornich, because of NatureMapping's extensive data, "we simply make better habitat-related decisions."

If NatureMapping is a boon for America's natural sciences, it has been equally helpful to thousands of kids in the classroom. In virtually every class that has taken on NatureMapping, kids, sometimes the most unlikely ones, have emerged as competent researchers and potentially the next generation of scientists.

Dvornich mentions one middle school in Washington where a student from each of the seventh-grade classes was asked to come to school early to monitor soot trays that had been baited with food the evening before. Their job was to take a census of the wildlife tracking across the trays during the night. According to Dvornich, these kids, many of whom began by flunking science or had never volunteered to get up in front of a class, became an important cadre proselytizing for the program and for science in general.

One of the precepts of NatureMapping is that real science doesn't coddle kids. While one Washington third-grade class produced noteworthy results about insects, the initial write-up was replete with grammar and spelling errors. When the class's teacher asked what she should do, the reply came back, "Treat them like scientists."

The class was encouraged to redo their presentation until the work was good enough to be presented. The results led to high-fives when the material was posted online, and, according to Dvornich, "their work represented something that was not just kid stuff."

Not that kid stuff doesn't have a place in NatureMapping training. In another classroom at the East Palo Alto Charter School, Ken Clarkson led Meg Barrager's third-grade class in a series of simple mental-awareness exercises designed to help sharpen kids' abilities to spot interesting and unusual anomalies along the trail. In it, the students paired up, scanned each other, turned around, and then slightly changed their appearances. Some were better than others at spotting a reversed belt buckle. The point was made: "Who will pay more attention?" Clarkson asked the class. Many hands were raised as Clarkson noted that the brain "is a very good muscle to work on."

Clarkson continued the indoor training by showing off the NatureMapping GPS software and its ability to represent the range of animals and birds from a regional level to a neighborhood one. They were also able to see how the numerous data points on the map, representing the collected observations of thousands of fellow students, could add up to stunning and often original natural insights.

The kids in the classroom were very much at home with the CyberTracker device, which Clarkson refers to as a "Game Boy for nature." The program is kid friendly, originally designed for use by often illiterate South African Bushmen using PDAs to track wildlife. Indeed it is Clarkson's observation that his students tend to be more at home with the NatureMapping software than even he is. "Within a month, they will end up being faster than me at entering data," he admits. Abria, a quiet girl, sitting toward the back of the class, seconds the notion, simply wanting to know, "When will we get to use our own CyberTrackers?"