Gene Yang is a full-time math teacher and technical adviser at Bishop O'Dowd High School, in Oakland, California. He also lectures about the role of comics and technology in education and runs a Web site featuring his animated "webcomics" for algebra students. He's also a husband and the father of a young boy. And, as if that weren't enough, he's just been nominated for a National Book Award for his first and terrific graphic novel, American Born Chinese -- the first novel in that form ever nominated for the prestigious prize. Yang says that getting all this done is merely a matter of good time management. But after reading American Born Chinese, it's clear to me he has talent to spare and a work ethic borne of doing things he loves.

American Born Chinese is actually three concurrent and interwoven stories: The first chronicles a Chinese American boy named Jin who forges a reluctant friendship with the only other Chinese student in his class while dodging racist bullies at school and wrestling with his own desires to be more American. The second is Yang's take on the popular Chinese myth of the Monkey King. And the third -- well, better not to give too much away. Together, the three stories deliver a powerful, poignant, and often funny account not just of what it's like to grow up Chinese in America but also of the experience of being different, anywhere.

Edutopia recently caught up with an affable and surprisingly relaxed Yang in his office at Bishop O'Dowd.

How much of American Born Chinese is an autobiography?

When I was growing up in Saratoga, California, there were very few Asians; I think there were just a handful in my elementary school, as in the book. In junior high, especially, I did experience a lot of overt racism. And then in high school, it kind of died down. But I always wondered, if I didn't quite connect with somebody, whether there was something underneath that.

I don't think it was the majority of kids; it was just a small group of them. But the actions of one group of kids affect your relationships with pretty much everyone around you. It makes you question other peoples' intentions.

Did you befriend other Chinese kids, like Jin, the main protagonist, does?

There was this kid from Taiwan who moved in. But, unlike as with the character in the book, I never became actual friends with him. He was a year younger than me, and I had a white best friend then; I think I was in fourth grade. And this kid would follow me around because I spoke Mandarin -- and I was pretty much the only kid in the school who spoke Mandarin.

That kind of guilt probably sticks with you for a long time.

Yeah, exactly. So this book was kind of an exorcism of those sorts of things. I think a lot of it came from self-hatred and thinking that if I distanced myself from this person, from this FOB, that would make me more accepted by my peers.

I was, I was. That character was traumatic for Asian guys my age. I think every Asian guy remembers when that came out. There were ramifications of that at school -- it was just ammunition. People would repeat the lines to you, and that would be just hilarious to them.

The teachers in Jin's classes don't do much to discourage the taunting. Were your teachers like that, too? What didn't they understand about how to make you feel more comfortable?

I don't think they totally understood what a sensitive topic it was for the children of immigrants. My ethnicity was something that made me glaringly different from my peers. When teachers would acknowledge that, it felt like acknowledging, I don't know, that I had a pimple on my nose, or something like that.

As a teacher today, when I see my own students of color, I think they're a lot more comfortable with ethnicity than I was. They wear their skins much more proudly than I did.

On a very different note, I know that one of your interests is showing teachers how comic books can play a role in teaching kids about technology.

Traditional academia has had a real affinity to text. It's preferred text as its primary medium, and there are a lot of really good reasons for that: Text is portable. You can carry it with you much more easily than you can a symphony or an oil painting. It's also really easy to learn to create. You can teach people to read and write to communicate much easier than you can teach them to paint or play an instrument with confidence enough to communicate something. There are a lot of traditional advantages to text.

But technology takes a lot of that away. It's just as easy to email a sound file as it is to email a body of text nowadays. What that means is, in this new century, we're going to move from having text be the default medium to having a multimedia world where the information we're trying to communicate is going to dictate the medium used. So, our students need to learn how to communicate in that environment; they have to be much more media savvy. They have to learn how to make decisions based on information, based on what they want to get across. 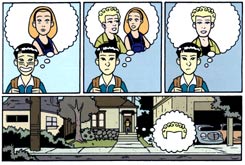 Does this mean there needs to be a greater focus on technical skills?

Well, yes, practically speaking, this means knowing how to put together a multimedia document. But I think that the software is becoming so much more user friendly that it's not going to take much time for kids to learn how to use it. I think the focus will be more about decision making, about understanding the nature of information, the strengths and weaknesses of different media.

What's the role of comics in all this?

Comics is a multimedia medium. It's a single medium that's made of two distinct media: still images and text. When students learn to read comics, and especially when they learn to create comics, they're learning this twenty-first-century skill of making decisions about information, and about media.

In a lot of effective comics, they'll use the image and the text as competitors of each other, so the images will tell you one thing and the text will tell you something else. A lot of times, we tend to give more credence to the image than the text. If they contradict, then we tend to believe what we see more than what we read. And that's an interesting dynamic for creators to play with. I think it needs to be an important part of the curriculum to give students these twenty-first-century skills.