Using multimedia can increase the effectiveness of teaching in any setting, but there's misinformation circulating about how and when it works best, according to a new report commissioned by networking and communications company Cisco Systems. In an effort to set the record straight, the high tech company hired an education consulting firm, the Metiri Group, to compile and review the educational research on multimodal learning.

The final report, "Multimodal Learning Through Media: What the Research Says," debunks conventional wisdom about the widely cited Cone of Experience, sometimes also called the Cone of Learning, concluding that students tend to learn more when teachers present material through multiple modes and media rather than in just a single mode. The data shows that students of all ages retain more verbal information -- textual or oral -- when educators supplement it with visual examples. 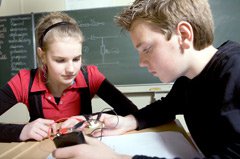 The Metiri Group derived its information from fourteen published scholarly articles (based on twenty-three studies and meta-studies that together surveyed almost 6,000 students) to determine the best practices for multimodal teaching, whether or not it includes technology. Edutopia.org culled the following guidelines for multimodal learning from the final report.

Save Interactivity for Complex Subjects

"As it turns out, doing is not always more efficient than seeing," the report concludes. "The reality is that for the novice student engaged in basic skill building, such as learning chemical symbols, individual learning through reading or simple drill and practice might be the optimal learning design. Yet, for a different learning objective -- for instance, understanding the cause and effect of a specific chemical reaction -- involving that same student in collaborative problem solving might be the most effective learning approach."

Charles Fadel, Cisco's global lead for education, suggests that educators devote their multimedia resources and interactive lessons to teaching complex subjects, rather than wasting them on building students' basic skills. Teachers developing interactive lessons for more advanced concepts, however, should keep in mind that Cisco's report doesn't distinguish between lessons in which students interact with prepared material and those in which they collaborate with peers. Fadel says more research is necessary to determine the efficacy of different types of interactivity.

Avoid Too Many Inputs

Just because multimodal approaches help students retain complex information doesn't mean lessons should be unnecessarily complicated. Which would you rather look at: a classy Web site that incorporates sleek text with an audio track and a video that cues when the audio is done, or a gaudy one that features numerous colors, blaring music, flashing banners, and an icon that beeps as it turns?

If you recoil at the latter image, there's a reason. Research shows that the idea of brain overload is a very real phenomenon based on the limitations of our memory and attention, and we're all at risk for it when too many stimulants vie for our focus.

Even though we're capable of simultaneously processing a wide variety of inputs, especially when we process them through distinct senses (such as sight, hearing, and touch), we can really focus on only one thing at a time. Hopping back and forth between tasks or trying to absorb too many ideas at once slows us down. "New scientific studies reveal the losses in efficiency in . . . multitasking," the Cisco report says. "Researchers find that thinking processes happen serially, resulting in delays caused by switching from one task to another. The delays become more pronounced as the complexity of the task increases."

So, if your students have trouble walking and chewing their metaphorical gum at the same time, be patient. It may mean they're trying to do both things well.

Really thinking about something cues a longer-term memory than simply absorbing it via our senses as we focus on something else. Imagine someone talking while you're busy reading. If he or she asks whether you're listening, you may parrot back the last sentence you heard and, as you hear yourself say it, suddenly realize it was important. But if you never recognize or actually think about that audio input, you're unlikely to remember it later. Translate that same concept to students simply letting the words of a lecture or a textbook wash over them, and the benefits of engaging a "working memory," a deeper kind of thinking, are obvious.

New science is reinforcing the veracity of old truths, such as the idea that organized, logical presentations of material stick better than more haphazard or spontaneous ones. Research shows that it's better to present related material together in time and space. Related words and pictures should appear at the same time and near each other on the page, the whiteboard, or the screen. Presenting them one after another, or separated by large spaces, reduces their effect.

Or, as the Metiri report puts it, "Convergence in the creation of memory traces has positive effects on memory retrieval. It creates linked memories, so that the triggering of any aspect of the experience will bring to consciousness the entire memory, often with context." And creating lasting, context-rich memories is, after all, what learning is all about.

Treat Multimedia as a Means, Not an End

Although the report doesn't address specific types of media or technology products, it recommends that teachers craft multimodal and -- for higher-order skills -- interactive or collaborative lessons. In doing so, it's important to remember that the goal is to activate students' thinking in multiple ways, using the media best suited to the student and the subject matter at hand. An aging wall chart that you explain verbally may be the most appropriate multimedia lesson for a student learning chemical symbols, whereas a computer simulation that permits Web-based collaboration may better serve that same student when she is trying to understand a complex chemical reaction.

"When we say we want to spend more money on making sure things are memorable, we want to make sure it's spent wisely," says Fadel. "For example, we should devote interactivity and multimedia to higher-order skills." In other words, deploy fancy tech only when fancy tech helps learning. But when a marker will suffice, roll out the trusty whiteboard."

The Metiri Group report, "Multimodal Learning Through Media: What the Research Says," relies heavily on the work of, among others, Roxana Moreno and Richard E. Mayer, whose research offers a deeper understanding of some of the topics covered. -- LW