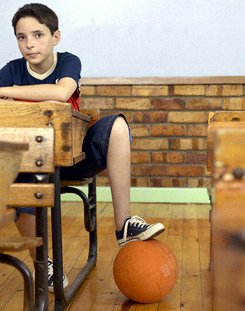 The Golden State Warriors, who play in nearby Oakland, California, made it to the NBA playoffs for the first time in thirteen years, and the San Francisco Bay Area went basketball crazy. If this nation could get half as exercised about its public schools as does about its sports, our schools would quickly become performance powerhouses.

The playoffs leading up to the World Series, the Super Bowl, and the NBA Finals all occupy a large portion of our nation's mindshare for months. What would happen if we also devoted major media time to the run-up for the National Teacher of the Year award or the Scripps National Spelling Bee or the Intel Science Talent Search? Education needs to be much higher on the national agenda and much more visible in our media; instead, our best teachers and students are nearly invisible on the country's radar screen.

For now, let's at least consider the lessons of basketball for learning. That's right -- think about how basketball is taught and learned and how we might apply those processes to our schools. An eminent science educator, Roger Nichols, who served as director of the Boston Museum of Science in the 1980s, taught me that lesson more than twenty years ago. Nichols's career was a testament to his commitment to bringing the excitement of science to children: He felt so strongly about it that he gave up his professorship at the Harvard Medical School to lead the Museum of Science during the last chapter of his career.

As a young assistant professor of education at Harvard, I took my graduate students to visit the Museum of Science and meet with Nichols, who made time in his busy schedule to sit down with us.

In discussing the need for hands-on science learning, Nichols asked us to imagine parents at the dinner table asking their young son or daughter that age-old question "What did you learn in school today?" The child shrugs, as children often do, and says, "We learned to play basketball." The parents then ask, "How did you do that?" The child answers, "Well, we sat in the gym and the teacher passed out these books, and we turned to chapter one, about passing the basketball, and we learned there are three types of passes: the bounce pass, the chest pass, and the one-handed pass."

"OK," parents would say, wanting to know more, "what happened next?" The child continues, "We read the next chapter about dribbling. And another chapter on shooting. We learned there’s the set shot, the bank shot, and the jump shot." After a few minutes of this recitation, the parents, increasingly exasperated, challenge their child: "But did the teacher ever give you a basketball and let you go on the court and play?" "No,” the child says with a sigh. "We just read the book until the bell rang."

Nichols said that no parent in America would stand for this, for sports to be taught to their children only through reading and through memorizing basketball terminology. Sports require observing oneself performing and watching others perform. Coaches and athletes routinely make use of videotape analysis of games to improve performance. Yet millions of parents settle for science, mathematics, history, and many other subjects taught through rote memorization of vocabulary from textbooks, and students never get a chance to actively perform real science or conduct authentic historical study.

Science and mathematics education should involve students getting out of the classroom and collecting data in fields and streams, at traffic intersections, and in their larger communities. Having students investigate seemingly simple but very meaningful questions such as "Where does the water in your house come from? Where does it go? Can you measure its quality?" would transform science and math education. The learning of history should immerse students in original documents, photographs, and music, as the Library of Congress's American Memoryproject does so well.

So, I propose a new national campaign to teach basketball with textbooks. If the ensuing parental marches on school board meetings, the outrage, and the debates about what a crazy idea this is also lead to thoughtful consideration about active hands-on, minds-on learning in academic subjects, this brief campaign will have been very worthwhile.