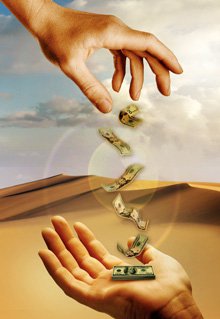 Reveca, a mother of four, struggles to support her family by selling flowers on the streets of her village in Peru. But thanks to a $325 loan from high school students in the United States, she recently expanded her small retail operation.

The budding bankers are trying their hand at microlending, a practice pioneered by Nobel Laureate Muhammad Yunus to help the world's poor. Microloans allow entre­­preneurs who lack the collateral needed for traditional financing to borrow small amounts -- typically a few hundred dollars -- to expand their enterprise.

American teens are beginning to see microlending as an opportunity to make a big difference through small loans. Justin Blau, a senior at Las Vegas's private Meadows School, founded the Meadows School MicroBank, one of the first microlending initiatives based at a high school.

Under his leadership, students have raised $27,000 to invest in businesses in the developing world. Blau learned of microlending two years ago while doing research for a debate competition. "I realized that $50-$100 can transform a family's life," he says.

Around the same time, a program got under way at a public school in the Seattle area. Bellevue High School's Microfinance Club has now made more than 1,100 loans in the Caribbean region. Its assets exceed $125,000, says founder Scott Bennett, a senior.

The schools' microlending programs differ somewhat, but they share a purpose: to support developing economies while giving students a powerful experience with philanthropy. "It's real money and real people we're lending to," says Blau. "That's why we're so motivated."

Differences in the Details

The Meadows School MicroBank raised its capital through microfinance supporters' donations, along with sandwich sales and other fundraisers. Adviser Kirk Knutsen, who teaches history and coached Blau's debate team, says students "really run this like a bank."

A student-run loan committee carefully evaluates the merits of prospective borrowers and keeps statistics on repayments. "They are gaining experience in managing assets and researching the geographies where we loan," says Knutsen.

Meadows administers its loans through well-established microfinance organizations handpicked by students. They chose Kiva, a San Francisco-based nonprofit organization founded in 2005, because its Web site allows for direct, personal impact.

"We are able to know the names and see the faces of the people receiving the loans," Blau explains. "I love that." But the young bankers believe in diversifying their investments, so they also invest elsewhere.

Bellevue students raised $125,000 in corporate donations to jump-start their efforts. Bennett and a few others started by schooling themselves in microfinance. They studied online resources and sought advice from business experts before approaching large businesses in the area.

"I had to be on my game when I talked to corporations," says Bennett. Microsoft was their first pitch. "We went in with our PowerPoint. We were shaking. But when we got a big yes, we were so motivated," Bennett recalls. "We figured, if it's this easy to raise money, why not do as much as we can to make the biggest possible difference?"

Bellevue's Microfinance Club grants loans through Esperanza International, a locally based nonprofit organization that lends to the working poor in countries such as the Dominican Republic and Haiti. The typical loan is $150, and the vast majority of borrowers are women.

Bellevue students can track all their loans online. "We get a picture of the person and her business," Bennett says. "It's great to use during our club meetings."

Last summer, 25 members of the Bellevue club traveled to the Dominican Republic to meet some of their borrowers. The trip gave students their first exposure to extreme poverty. Borrowers greeted the Americans warmly.

"It was so heartfelt," Bennett says. Many families operate home-based businesses, which they are expanding with access to capital. "We could see just how these loans are improving the quality of their lives," Bennett says.

In Las Vegas, Meadows students are considering even more ways to make a difference in the regions where they make loans. "We're talking about financing an eyeglasses campaign," Blau says, to help women who earn their living making handcrafts.

Blau and Bennett are both headed to college in the fall, but they leave behind strong organizations. "This is forever -- we're creating a legacy," Bennett says. Each has also been busy sharing insights with other schools. "We want to grow this movement," Blau explains. "It’s not a cliché to say that little amounts of money do make a difference."

Suzie Boss is coauthor of Reinventing Project-Based Learning: Your Field Guide to Real-World Projects in the Digital Age and is an Edutopia.org blogger.