Merit pay can sometimes seem like the third rail of educational policy: It's politically dangerous, potentially explosive, and liable to burn anyone who touches it. But now, this powerful controversy is proving to be hard to ignore as salary bonuses and peer review resurface as hot reform topics in 2008.

Below are ten recommendations by principals and other educators on how to implement reform and avoid catching fire: 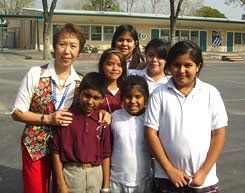 One school demonstrating particular success with a merit-pay system like the one outlined above is the Vaughn Next Century Learning Center, in Pacoima, California.

Vaughn, a low-scoring public elementary school in its pre-charter school incarnation, implemented many of the reform tips and went on to win numerous accolades, among them a National Blue Ribbon Schools Award. The school won the award, which recognizes outstanding public and private schools nationwide, due in no small part to changes in its teacher-pay structure.

At Vaughn, Principal Yvonne Chan has instituted a system in which teachers can earn an additional $17,000 a year in performance-based bonuses. When you consider that the average elementary school teacher makes about $45,000 a year, it's obvious that that kind of money is a big incentive. "Leaving the district was a no-brainer," says Andy Carbonell of his switch to teaching sixth-grade math at Vaughn after eleven years as an elementary school teacher in the Los Angeles Unified School District.

"My base pay at Vaughn is virtually identical to the district's," Carbonell points out. "But when you include all the possible bonuses and incentives, my salary is substantially larger."

Chan offers one last tip: "Principals and administrators must opt in first."

Laura McClure is a freelance writer and editor in San Francisco.

What's in a Name?: A Phrase's Controversial Past

"'Merit pay' is a phrase that makes a lot of teachers' skin crawl," says Nínive Clements Calegari, coauthor of the book Teachers Have It Easy: The Big Sacrifices and Small Salaries of America's Teachers. Calegari, now a strong supporter of merit pay, admits that as a public school teacher herself ten years ago, she was heartily against the idea. "What happened historically is that it was instituted atrociously -- and there was only enough money to give a couple of superstar teachers extra pay," she says. "Well, no one likes that."

Past experiences aside, Calegari believes that if merit pay is done correctly, it's a crucial means to raise teachers' salaries. "It's the only thing that will make the profession prestigious, competitive, and sustainable," she notes. "And you need that to really reform schools." But the Reagan-era failures of merit pay have led many supporters of the concept to distance themselves from its traditional name. The nom du jour for linking teachers' salaries to how well they and their students do: pay for performance. -- LM