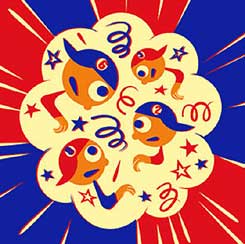 Angry voices reach a crescendo and then -- wham -- a kid in an arm cast swings his plastered fist into the face of a much taller boy, who recoils and then whips a hockey stick from his open locker. The crowded hallway clears a circle around the boys as two men wade in. One deflects the hockey stick; the other steps in front of the second teen.

"Hey, man, stop. Chill," he says. "Help me out here." A moment later, the two security guards are leading the boys in separate directions. Later, the students will meet for security-led mediation that involves having the students acknowledge both sides of the problem and come up with and agree to a solution. The fight is over essentially before it began -- a disappointment, apparently, to at least one student at Cambridge Rindge & Latin School (CRLS), the only public high school in Cambridge, Massachusetts.

"Just when things get interesting, they show up," says senior Chris Valdez. "It can make life boring." Moments later, though, Valdez adds with a sheepish grin that, while the intervention is annoying, the guards can be cool, "especially during fights."

"Boring" is how the security staffers at CRLS like it. And it's been plenty boring lately. In fact, CRLS isn't the school it was when John Silva, its director of safety and security, joined the administration team more than twenty-five years ago. He arrived immediately after a student's stabbing death sent shock waves through this liberal and diverse college community. The school, a stone's throw from Harvard Yard, was the scene of meeting after meeting. "It tore the city apart," says Silva. "Back then, we had a lot of tense kids and fights, almost daily -- some racial, some turf, but mainly just teens being touchy about what they're always touchy about: respect."

Silva's understanding of what makes moody adolescents tick is likely the key to the school's current excellent safety record. "I don't believe in bad kids," says the security chief. "There are usually good reasons for bad behavior."

For Silva, who has a master's degree in intercultural relations, finding and treating reasons for bad behavior is how schools stay safe. In an era when many urban high schools use cops on campus and high tech monitors to increase security, Silva makes aggressive use of social service referrals. And although he may not describe it this way, Silva functions primarily as an advocate for the school's troubled teens. He helped make a move in this direction years ago by expanding the district's program that recorded policy violations. It was lot of work, he says, but it paid off. "You see patterns," he says, "a history from elementary schools on up. Makes you sit up and deal with some kids more seriously -- not in terms of punishment, but in terms of the kinds of social services they could use."

This is not how most other school districts handle discipline. In New York City, for instance, Mayor Michael Bloomberg began two years ago to clean up the city's most violent schools by installing metal detectors, beefing up security staff, and sending hundreds of police officers to patrol high school halls. The result of the program, according to top New York City officials, has been mixed. Crime at these schools has dropped, but students have logged so many complaints about "rude, nasty, and disrespectful" police officers that the city council's education committee held a special hearing for student testimony.

Complaints came not only from students. Administrators, bothered by questions of jurisdiction, wonder who, exactly, is in charge at these schools. Bronx Guild High School principal Michael Soguero was arrested after objecting to a police officer removing a student from class for cursing in the hallway, and two teachers at the New School for Arts and Science, also located in the Bronx, were arrested last March after asking police officers not to handcuff students in the classroom. In 2004, Brooklyn's Thomas Jefferson High School, where a pair of students were shot during a fight in the halls in 1992, installed metal detectors, doubled the security staff to twenty-five safety agents and added another eight police officers to supervise the school's 1,600 students. (The school has since been divided into four small schools, and it is now structured differently.)

By contrast, CRLS, with 1,800 students, has twelve safety specialists and one female police officer to oversee one of the most racially and socio-economically diverse student bodies in the country. The specialists are a multiracial staff of four women and eight men, many with deep roots in the community, who collectively speak Spanish, Haitian/Creole, Portuguese, Italian, and French. Haitian-American guard Aral Lecorps, a strong avuncular presence for many of the boys, serves as translator and unofficial liaison to the Haitian-American community. The guards attend the school's shows and sports events, and their affinity with these kids, many from impoverished and chaotic homes, is apparent as they trade handshakes and greet students by name. They regard this close rapport with students as their greatest security investment.

"We get a heads-up on most trouble coming down the pike," says guard and girl's hockey coach Kevin Mitrano. "When a student stops one of us with 'I think maybe a thing is going down outside at lunch,' we take notice." As a result, if trouble begins to brew, they can be there to step in immediately. "Scenes escalate fast; crowds form and kids want to save face. The last thing we want is to have to wade through a crowd five kids deep," Mitrano says. "We separate the parties from each other and from the scene as fast as possible."

"We never ignore warnings, ever," echoes Silva, who gets calls from youth centers and police about fights the night before. "They'll tell me about a beef at the movie theater and report the names of those involved. And, depending on the incident, we'll pull kids from class. We never let things build and we never let trouble go to the street after school."

Silva's staff has extensive training and protocols for every kind of situation. Though they have a repertoire of defensive moves, mediation is their primary tool. The staff takes crisis-prevention courses, where they focus on how to talk to troubled kids, and they do a lot of talking: At one time, the school was doing 200 peer mediations a year, but the need has diminished significantly. Silva, who has served as a security consultant to school districts across the country, describes informal mediation as the kind of proactive work the staff does all day, every day. It is the reason, he says, the number of physical altercations has dropped 75 percent in the last fifteen years. "Much of this work is invisible," says Silva. "My team doesn't get much credit for solving the problems that never go public."

Silva hires carefully, saying he much prefers applicants experienced in working with teens over those with police or security backgrounds. "I can give them safety skills," he says, "but I can't give them kid sense." Silva so values these so-called soft skills that he has never seriously considered the security cameras and metal detectors or even the Palm Pilots many of his peers at other schools use for on-the-spot record checking.

Silva also credits diversity at CRLS as being responsible in some degree for keeping the school safe: "When you look at schools like Columbine, semihomogenous places with obvious 'in' and 'out' crowds, some kids feel marginalized. At a place like CRLS, where the mix of kids is huge, everyone seems to have a place." The school population, which includes students from seventy-six nations and ethnic backgrounds, is more than 65 percent minority, and almost half low income. "We're an urban city with an urban high school," Silva adds. "We have foster kids and homeless kids with jailed or drug-addicted parents; we have some kids who lost their parents in Eritrea and are now here living with siblings. We have kids with every life stressor imaginable. And then we have kids who come from Harvard and MIT homes -- they also flourish here."

What becomes important with such class differences and discipline, Silva has found, is fairness. The most important school rules are absolutes -- zero tolerance for drugs, alcohol, weapons, unprovoked assaults, or threats to teachers. Consequences for these violations are heavy: mandatory suspension and often expulsion. "It is essential to be fair," says Silva. "We work closely with administrators, and we try to be flexible. But when we can't, then consistency is very, very important. We expel the kid dealing pot who has Harvard lawyers for parents and no prior record the same way we expel the teen with a police record and no one at home." The difference is that students without home support are more likely to need and use the referrals and placements CRLS can provide.

In addition, students who are expelled can petition after six months to return to CRLS. This year, according to Silva, more than 85 percent of expelled students have been readmitted and have transitioned back successfully.

Silva has worked hard to cultivate strong relationships with regional social service agencies. "We seek whatever will help our students," he says, adding that it is the school's responsibility to ensure that no student emerges into the community as the city's next problem. Silva proudly notes that CRLS has never expelled to the street: "Our students always get placed in court settings, hospitals, a variety of special education and alternative schools, even a high-priced small school for one truant with social phobia."

The school pays for these placements, too. "A large part of our budget goes to placement," Silva says, noting that the Safety and Security Department's generous $750,000 budget shows the city and administration's commitment to school safety.

The sense of security students feel on campus today is borne out by a recent school-climate survey distributed by superintendent Thomas Fowler-Finn. "I actually wanted insight into the school's racial achievement gap," he says, "and thought a survey on how the students perceived the school -- academics, teachers, extracurriculars, safety, and social morale -- would reveal differences between racial groups." District administrators were stunned by the results: The responses revealed virtually no statistical racial differences. In fact, the only outlier was parent educational levels. And the highest positive in the entire survey? School safety.

Colleen Gillard is a freelance journalist who lives in Cambridge, Massachusetts, with her husband and two daughters. Contact her at cgillard@comcast.net.