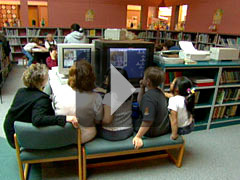 For many students, what happens in the traditional American classroom is boring. Small wonder, when you compare such relatively inanimate stuff as pencil-and-paper-bound reading, writing, and math drills to the media mix of mind-bending imagery and hair-raising sound that consumes most of their waking hours outside school.

A recent study, "Generation M: Media in the Lives of 8- to 18-Year-Olds," found that students in grades 3-12 spend an average of six hours and twenty-one minutes plugged in to some type of media each day. Accounting for multitasking, the figure jumps to about eight and a half hours including nearly four hours of TV viewing and forty-nine minutes of video game play. Comparatively, homework gets slightly less than fifty minutes of attention.

For this digital generation, electronic media is increasingly seductive, influential, and pervasive, yet most schools treat the written word as the only means of communication worthy of study. Therefore, most American students remain poorly equipped to think critically about, and express themselves through, the media that defines them.

Cue the herald trumpets, and enter the National Association for Media Literacy Education (NAMLE), an organization that promotes media literacy as an essential life skill. Consisting of more than 500 educators and media experts, the NAMLE believes that "as communication technologies transform society, they affect our understanding of ourselves, our communities, and our diverse culture. By applying literacy skills to media and technology messages, by learning to skillfully interpret, analyze, and create messages, media literacy empowers people to be both critical thinkers and creative producers of messages using image, language, and sound."

Media literacy means various things to different people, encompassing everything from the basics of graphic design to critical analysis of advertising images and news broadcasts. "One of the radical ideas behind media education is to make school more student centered," says Robert Kubey, director of Rutgers University's Center for Media Studies. "That isn't to say that we pander to whatever students are interested in so that the whole curriculum is about video games and rap music. But we want to understand a little better about the pleasures and interests that students have and use that as an avenue to have intellectual and analytic discourse about these products. Could they be better? What makes this one good? Are there moral values being taught? In other words, reach kids where they live."

One place kids live is the multiplex, where they indulge in popcorn and eye candy. "We were educated to read actively, yet we're conditioned to view visual images passively," notes Steve Apkon, executive director of the Jacob Burns Film Center, in Pleasantville, New York. Serving over five thousand elementary, middle school, and high school students, the nonprofit organization seeks to change passive viewers into active ones with several curriculum-based visual-literacy programs.

In the See, Hear, Feel Film program, for example, third graders watch feature film clips to learn basic moviemaking techniques such as how various camera angles heighten dramatic impact and how emotional content can be conveyed without words. After the screenings, students work in small groups with their teachers to compose short scenes they then act out. 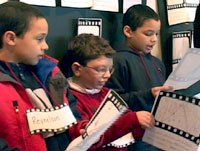 In an animation workshop, fourth graders collaborate to write, storyboard, direct, and shoot their own animated stop-motion films. The goal is to have students begin to view films, TV shows, and Web sites with more analytical minds. Former New York Times movie critic and center board president Janet Maslin believes young people "don't often understand the choices that are made with each shot, the propaganda value, the subliminal value. If we do nothing else here, we're going to teach kids how to see more deeply into that and how to be able to speak for themselves in the same kind of language."

Several other groups are making important contributions to the advancement of media literacy in and outside the classroom. The Web site of the Media Education Foundation offers some fifty videos and free educational materials that foster critical examinations of mainstream media and advertising. In the San Francisco Bay Area, Youth Radio conducts after-school programs offering classes in radio-broadcasting skills, including engineering, DJing, journalism, and Web production. Working as interns at area radio stations, students produce pieces that air on local and national outlets such as NPR.

For the classroom, Just Think offers several programs and curriculum packages such as "Flipping the Script: Critical Thinking in a Hip-Hop World," designed to help educators teach media-literacy concepts and production skills around the theme of hip-hop culture. "With this curriculum, kids who normally don't show up at all come to class every day," says Just Think founder Elana Yonah Rosen. "They either love hip-hop or they hate it, but they have opinions about it, as opposed to some piece of nineteenth-century literature they get in English class."

The NAMLE and Just Think are collaborating on a three-year research project to study the efficacy of teaching media literacy in the classroom. Study director Nellie Gregorian says the early results show promise. "Interviews of participating teachers strongly indicate that the program has resulted in increased interest and engagement of students in core curriculum subjects as well as improved overall academic performance."

Filmmaker and George Lucas Educational Foundation chairman George Lucas thinks it's time to change "English" class into "Communication" class, where students learn the grammatical rules of graphic arts, film, and music along with English grammar. "It shouldn't be taught as some esoteric, arty thing. Communication skills should be taught as very practical tools that you use to sell and influence people, to get your point across -- especially in this age, where kids are, more and more, using multimedia."

Until then, teachers will spend less than an hour each school day teaching "English," leaving students to their own devices -- cell phones, TVs, iPods, PlayStations, and laptops -- to enjoy their eight-hour independent-learning adventure in the fun house of digital media.