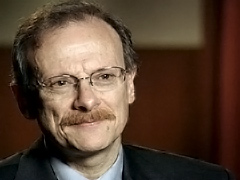 Maurice Elias, Ph.D. is a psychology professor at Rutgers University and director of the Rutgers Social-Emotional Learning Lab and the Developing Safe and Civil Schools Initiative. He is a regular blogger on Edutopia. In this interview, he talks about educating teachers about emotional intelligence, the importance of teaching self-control, and the role of social and emotional learning at home. Check out a video of him talking about why SEL should be an integral part of academic life.

1. What is emotional intelligence?

Emotional intelligence is the set of abilities that we like to think of as being on the other side of the report card from the academic skills. It's the set of abilities that helps us get along in life with other people in all kinds of life situations. It's our ability to express emotions, to detect emotions in others, to regulate our strong feelings when we have them. It's our ability to focus our energies on goal setting and problem solving -- to be able to take the perspective of other people that are in our social world. And finally, it's our ability to have the basic social skills that we need to manage everyday relationships.

2. What is the "missing piece" in educational practices that you have referred to?

We felt that when you looked at the literature on education reform, which is a very long, long literature, it's replete with failure. And the question is why is there so much failure in educational innovation? And we believe that the missing piece is the reason. And the missing piece is social and emotional learning. It has never been a part of teacher education. It's never been a part of teacher training. We've been treating students as if they're not people, as if they're somehow sponges and not human beings that come in with their emotions in full play.

We can't learn in the absence of dealing with our emotional state. Not only that, I don't know of anybody that can learn in the absence of a positive relationship. We learn from the people we care about. And yet we somehow pretend that in school that doesn't matter. So we presented the missing piece, social and emotional learning, as the reason why those who were actually concerned about academics should be concerned about social and emotional learning as well.

3. What are some of the obstacles to implementing social and emotional learning in schools?

In our book, Promoting Social and Emotional Learning: Guidelines to Educators, we made a list of obstacles that people throw out to prevent social and emotional learning from coming along.

There are three types of obstacles. The first one is, we don't have time. We don't have time, our curriculum is so crowded, it's so crowded. And to that we respond much the same way as you would expect a physician to respond. So when a new cure comes along and the physician has to learn it, how would we like a physician to respond by saying, "I'm too busy. I can't really learn the new cure." Well, it's ridiculous. In a profession, you have to learn what you have to learn; you have to do what you have to do. So you have to make time for social and emotional learning if it's essential.

The next set of objections that comes along is, it's not the school's job. The parents should be doing it. To which my response is well, perhaps that's true, but are the parents doing it? To which the answer is no, they're not doing it. So who are the people that spend most of the time with the children? It actually is the educators. And wouldn't your life as an educator be better if these kids were socially and emotionally receptive? Not fighting. Not throwing your classroom into chaos. Not fighting with each other. Of course it would. Let's give them the skills to do it. Rather than waiting for the parents to do something that they may well not get to doing.

4. How are teachers prepared to include social and emotional learning in classrooms?

One of the areas that the Collaborative for Advanced Social Emotional Learning has identified as its priority is the training and preparation of educators to do this work. From our perspective, it seems to us to be a basic part of all teaching. And it is a mystery to us why it's not part of what all teachers have to get before they go into a classroom.

The data show that approximately 50 percent of teachers leave teaching after five years. That is an extraordinary rate of turnover. We know the rates are higher in urban districts. So this already creates an unbelievable erosion of continuity and expertise that our most needy kids get. Why do they leave? Is it because the buildings are crumbling? No. Is it because the textbooks are still from the 1940s? No. Are they happy about those things? No. But they are not going to bail because of that. They bail out because they don't know how to deal with the kids in the classroom. They don't know how to manage their social and emotional needs. They don't know how to respond to their horrific family stories. They don't know how to deal with the fact that the kids are coming in hungry and not ready to learn. That's why we feel social and emotional learning needs to be a very basic part of teacher preparation.

5. Why is self-control so important?

One of the things that's often talked about in social and emotional learning is the so-called marshmallow test where a bunch of kids, young kids, are put in a room and they're told that if they wait for the examiner to come back they can have more marshmallows than if they don't wait; they can have one right now but if they wait they can have more than one. They can have two, they can have five. That set of studies, which was conducted originally in the 70's, as kids have been followed up for twenty years, it turns out that there are a lot of positive life consequences associated with waiting, in terms of being more likely to be out of jail; in terms of social skills, etc.

But one other thing that doesn't get mentioned is that there are SAT score differences of 200 points for kids that passed the marshmallow test and waited. And I just was doing a workshop with teachers, and I was talking about this finding, and I asked them. I said, now how can this be? How does that make any sense? And they started to tell me. Well, if you're impulsive it means you don't read all the questions on the standardized test carefully. It means you pick the first response instead of reading all the way to the fourth response. It means you don't read the directions carefully. It means that you're maybe skipping questions. It means a whole lot of things in your academic performance, regardless of how absolutely smart you might happen to be. So the link of these skills to achievement testing is very substantial because to pass the test itself requires an array of social and emotional skills that often go unrecognized.

6. What kind of difference could "the neighbor test" make in family relations?

We ask parents to think about a time when everybody in the household is arguing. This is not a hard time to imagine. Everybody is in a tumult, fighting, arguing, bickering, etc. Doorbell rings. A neighbor is there. What happens? Typically everybody quiets down. Let's say the neighbor comes in. Then what happens? People are unbelievably civil. They can't do enough for this neighbor. A kid that you couldn't get to give you a glass of water will now give anything to the neighbor. It's not a problem. And they have a wonderful time. Neighbor leaves. What happens?

One of two things happens. You go right back to fighting, or more often than not, we all go about our business. I ask parents to think about this. And the question is, why does it take the presence of a neighbor to give us the self-control that we actually have all the time? We as parents need to act with emotional intelligence without necessarily being prompted. So then I challenge parents to take the neighbor test. The neighbor test is very simple. Can you go one whole day as a parent and talk to your children as if a neighbor was following you around every minute of the day? Not say anything to your child that you wouldn't say if a neighbor was right there? Can you do it for one whole day? And when I do workshops with parents I remember the first time I had parents go out and try it and come back and report on how they did. And a mom said, "I made it until 8:00." And I said, "Wow, that's great!" And she said, "No, 8 A.M." And I said, "Whoa, OK, still good because you've got to make it to 8 A.M. before you make it to 8 P.M."

But if you could do it for one day, then my challenge to parents is can you do it one day a week? Just one day a week. I don't even ask spouses to do it with one another, because that's too much to ask. But can you do it with your children? And then I ask parents to reflect on all of the world's great religions, all of which have the concept of a day of rest. Not two days of rest, three and a half days of rest, five days -- one day of rest. Why is this? Whether you believe it was religiously motivated or whether you believe it was just based on the wisdom of great people, the idea is that one day of rest is what human beings need for emotional rebalancing.

If we in our families can introduce the neighbor test, and just one day a week talk to our kids in more respectful, kind ways, drop those little insults and naggings that they won't miss anyway, the rest of the six days it could be as miserable as we like. But we will have accomplished an emotional rebalancing. Fifty-two times a year we will have brought things back into balance in our household. Our kids will have reminders that, "Hey, they really do care about us. They really do think we're OK. It's not just when the neighbor shows up, it's actually once a week." And that's what our families need to have a more emotionally intelligent climate.

7. What advice do you have for parents who want to strengthen social and emotional learning at home?

It's based on the theory of emotional intelligence. Simply this. We think that well, they're our kids; they understand. They understand that we don't really mean it. In actuality, the emotional processing of a negative message from the parents is far deeper than a negative message coming from a stranger. When your loved one says to you, "You're never going to amount to anything just like your father's entire family," you as a kid have to think about what that message is about. Either my parent is a raving lunatic, or my parent is correct. You can't discount your parent the way you can discount a stranger. So the emotional meaning of negative words by parents is far greater than I think parents realize.