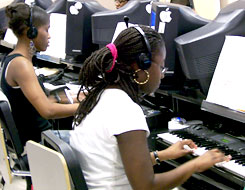 The students sit facing computers, headphones on, music books to the left, keyboards in front. The classroom is quiet, as their piano practice can be heard only through the headsets. These thirty-two advanced and beginning piano students at Montgomery Blair High School, in Silver Spring, Maryland, just spent five weeks learning how to make film soundtracks. Eager to demo their latest work, the students pop open a computer file and take off their headsets to explain how they chose their tracks and came up with their sounds.

Teacher Sara Josey wanted to give her class a project that would not only teach the mechanics of scoring film using software but also encourage her students' creativity. And the students got lessons and feedback from someone in the business: Josey enlisted composer Michael Josephs, who has a son in her class, for assistance. The idea earned Josey a $2,500 scholarship from the Wolf Trap Foundation, which runs the nearby Wolf Trap performing-arts venue, to put the project in action.

To get started, Josephs, a freelance composer who does scores for Mutual of Omaha's Wild Kingdom and National Geographic Society documentaries, lectured about music for television and movies and played examples of good scoring, showing film clips first without music and then with a score. Josey then introduced her students to Garage Band, a program available for Macintosh computers that allows users to create music using hundreds of prerecorded loops and sounds. Using some of the scholarship money, Josey was able to upgrade the class headphones and purchase more music for Garage Band. Once familiar with the software, students could choose from three ninety-second films for which they would develop a sound track: a soccer film, a "chase" scene, or a sailing video.

Senior Ka Yang chose the sailing video. In his sound track, soft strings and the sounds of water lapping give way to fast drum beats and cannon fire as the shots change. Next is a simple scene of a sailboat gliding along the open ocean. The music slows to gentler drum sounds and the occasional off-tune organ riff one usually hears in movies during suspenseful moments.

Yang, an advanced piano student, wanted to convey different emotions through the sound track. "Whenever there's a difference in the movie, we need to change the theme to a different emotion," he explains, "for example, happiness in the beginning, adventurous in the middle, mysterious at the end."

Some students worked only a few class periods to create a sound track they liked. For others, it took a few weeks. But Josephs believes the students are able to master technology he didn't have when he was in school. "I was amazed at how well they did so quickly," he says. "I was like, 'Whoa, you go.' The kids were really on it."

From the nontechnical standpoint, Josephs says, he wanted the students to pick an idea for their score and see that idea to fruition. For instance, partners Marteki Martey and Sylvia Ojo knew they wanted a hip-hop feel for their soccer video, but it took until the assignment deadline to get one that sounded right. "We kept changing things," says Martey, a junior and an advanced piano student. "You come in one class and say, 'Oh, that sounds really good,' and you come in the next class and say, 'What was I thinking. Why would I do that?'"

In the end, Martey and Ojo used a mix of steady drum beats, dance music, and the sounds of a cheering crowd to convey a sort of celebratory mood for the soccer film, a mix of stills and live-action game sequences.

Partners Jens Josephs and Shawnecca Burke, who chose the chase video, wanted a sound track that didn't convey a heavy mood. "We wanted it to have suspense but didn't want it to look too scary," says Burke, a freshman and beginning piano student, "so we added a little fun."

In the film, a young girl (Josephs's daughter) is running through a park as the family dog chases her. Eventually, she hides behind a car and the dog runs by, not noticing her. The girl jumps up and down, and the words "I got away!" flash across the scene. The pair used a combination of prerecorded loops and their own compositions to achieve their sound track, which progresses from an ominous, horror-film feel complete with screeching violins to a hip-hop funk track at the end.

Josey wanted her students to understand how people visualize pictures differently -- and that, she says, they got. Ten groups (most students worked in pairs) chose the soccer video, and the results varied significantly, ranging from upbeat dance sounds to world music tracks. "I was surprised by the emotion some of them conveyed in the videos," she says.

Josey made it a requirement that the groups compose at least one original track -- a task some found more difficult than others. About half the class used mostly their own compositions, while the others met the minimum requirement. But she wanted the students to have a good experience with the project, so she created a rubric that would give them the greatest chance of success.

Among the grading requirements: Students had to create an introduction and an ending, use at least five tracks, and do a one-minute presentation about their sound track. Because this project was partly funded through the Wolf Trap Foundation's Scholarship Program for Performing Arts Teachers, the students also had to present their final product to venue staff. And finally, the students kept journals to record their thoughts on the day's work or leave questions for Josey and Josephs. "Some of them wrote down 'This was a horrible day. We erased everything and started over,'" Josey says.

Josey isn't a stranger to using projects and technology to enhance learning. In her other classes this term, students studied the blues, listened to examples of blues performers such as Louis Armstrong and Ray Charles, and then wrote their own twelve-bar blues score with accompanying lyrics. Last semester, most of Josey's classes wrote radio commercials; she taught the value of phrasing and provided examples of effective and ineffective advertisements. "I have a whole scenario: 'You've been hired by a radio station to do a thirty-second commercial. You can sell something -- a service, whatever,'" says Josey. "The students have to create it and use the mic to present the final product."

But this was the first time she'd asked her students to score a film, and she hopes to repeat the project in the future. The students say they took away a greater appreciation for what it takes to create soundtracks for television and movies. "Composing is harder than it actually looks," Burke says. "A minute and a half was very long."

Yang adds that he figured the project would be fun, if not a bit difficult. As for his final product? "I was surprised -- it was pretty good!"