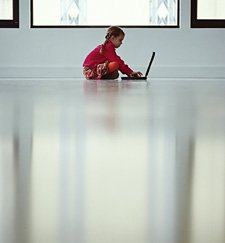 If you're tired of taping down cables or ripping out walls to get online, then you're ready for Wi-Fi -- the catch name for several technical standards that let you establish a high-speed connection to the Internet using a radio signal.

Let's say you want to install a Wi-Fi network in your school's library. You can set it up in a few simple steps:

1) First, you'll need a wired connection running into the room that receives your Internet connection -- DSL, cable, or a T-1 line. It will come in through a modem configured for that service and is usually offered by your networking service provider. For a single PC, the connection goes directly to the machine. A network, though, requires a little box called a router ($50-$100) with an antenna, using ethernet (or CAT-5) cable. (Linksys, NetGear, D-Link, and Microsoft make these devices.) Routers come in two standards, 802.11b and 802.11g; "g" is five times faster than "b." (For Macintosh users, the names are AirPort and AirPort Extreme; you'll want Extreme.)

2) If they didn't come preinstalled with wireless cards, your computers will also need adapter cards ($50-$75 each) to receive the Wi-Fi signal, and they will need to be equipped with software that finds it. That will take a little work if you're using an older version of Windows, but if you have newer machines that use Windows XP, you're in luck -- XP makes finding a Wi-Fi signal easy.

3) Install the adapter card into the PCs to receive the signal. This step entails opening up each computer, plugging in a PCI adapter, and sliding the small antenna card into the slot in the adapter you've just installed. Each system (router and adapter) comes with a disc that walks you through the installation. Pick a channel to broadcast and receive on; there are eleven for the United States, and Wi-Fi networks usually use channels 1, 6, and 11 so they don't interfere with other channels. (See "Jargon Buster" below.)

4) Select your channel and you're set.

Installing Wi-Fi is simple and should take about ninety minutes. But you may run into a few glitches. For one, Wi-Fi networks run on a 2.4-GHz signal, the same frequency many cordless telephones use. If you find that a phone is interfering with the Wi-Fi signal, the usual solution is either to move the phone out of range or to get a 900-MHz phone, which won't interfere with the Wi-Fi.

The signal typically works well at 100-150 feet, although you can extend the range and work around corners by using extra access points to repeat the signal. Drywall and glass usually won't interrupt it, but stone or cinder block can; the clearer the line of sight between an access point and a PC, the better the reception.

Another issue is security. If your room is close to the outside world -- say, if there's a coffee shop beyond the library wall -- your neighbor may be able to pick up your signal. Odds are, though, that will be a problem only at a school in a dense urban area, and in virtually no time you'll have set up a simple conduit to the unlimited educational opportunities available online.

Donald St. John is a veteran technology journalist based in Amherst, Massachusetts. Write to dgstjohn@comcast.net.

802.11b: The basic Wi-Fi standard for broadcasting.

802.11g: A newer Wi-Fi standard that broadcasts a faster data signal than 802.11b stations do. Don't worry if you bought a bunch of the older cards for your computers; the "g" systems work with "b" equipment.

Access point: What's actually broadcasting the signal to your computer. This is built into a router, and a stand-alone version can be used to extend the signal by "bouncing" it farther along.

Cable modem: A device that enables cable lines to deliver a high-speed connection to the Internet.

CAT-5: The technical name for the ethernet cable you plug into your Internet connection and wireless router. Available at electronics stores.

DSL: A technology that allows phone lines to deliver a high-speed connection to the Internet.

Ethernet: Technically, the standard that defines the methods for online file transfer, but often used as a synonym for the wiring that hooks your Internet connection to your router and PC.

PCI adapter: A hardware card that you insert directly into your computer's main board simply by plugging it into a matching slot. It lets you extend the computer's capabilities.

Router: A small box that lets you route a high-speed Internet connection to several computers; a wireless router broadcasts that signal.

T-1: The original high-speed Internet connection; it's still much faster than cable or DSL. It's also far more expensive.

WEP: Wired equivalent privacy, the original security standard for Wi-Fi. It uses 64- or 128-bit encryption and isn't as strong as WPA encryption, but it's still hard to hack.