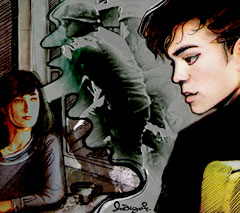 By the spring semester of his sophomore year, I was worried that Steven, one of my students at San Francisco's Balboa High School, was at risk of dropping out. He had a lot of support at school, but Steven's mom worked nights, and he seemed easily influenced by his friends who had already dropped out.

As the school year passed, Steven became increasingly absent from class, and when he did appear, he seemed tired and inattentive. My bag of tricks for engaging students such as Steven was coming up short.

But when we started an oral history project for which I asked my students to record, transcribe, and publish interviews with people they knew who'd moved to California, Steven came alive. Steven chose to interview his mom, who had escaped from Cambodia during the Khmer Rouge regime, and he said that in their hour-and-a-half conversation, she told him stories she'd never revealed to him before. When volunteers came to class to help make the stories publishable, Steven concentrated on telling his mother's story through proper paragraph structure and grammar, and he was careful to represent her respectfully. I'd never seen Steven so focused on anything.

Steven presented his mother's history in her own words: "I wanted to get out of that horrible place. I knew if I stayed there any longer, nobody would survive. Not many of us survived, but we managed to escape -- I was one of the lucky ones."

A similar magic occurred every time I assigned oral histories to my sophomore English classes. Collecting oral histories, or documenting the experiences of people who have lived through a particular aspect of history, allows students to see themselves as storytellers and historians. The process taught my students skills from across the standards spectrum, and it made them conduits between history and a person's life -- an experience that stayed with them well beyond the assignment.

Though oral history projects are typically assigned to secondary school students in subjects such as English or history, they can work well in a variety of classes. "I think they're appropriate from the earliest levels all the way up through college," says William Scott, a former middle school teacher who taught oral histories in his Los Angeles and San Francisco classrooms.

Scott, now an assistant professor of social studies education and history at the University of Delaware, points to a middle school math teacher who asked his students to interview adults about the ways math comes up in their everyday lives. Scott adds that he has also seen simplified oral history assignments work for younger students. One assignment popular with a number of elementary school instructors helps teach children about their neighborhood by assigning them to interview people who live near them.

Eunice Nuval, who teaches at a San Francisco continuation high school, says choosing a topic that's relevant to her students' lives keeps them engaged with the project. Last year, for example, her students conducted interviews on racism. "The students immediately knew people who had something to say about the topic," explains Nuval, whose class consists entirely of students of color. "It was an issue that they cared about."

I've found that underrepresented histories or perspectives often make rich subjects for oral history projects. I frequently nudged students to interview people they knew whose stories were rarely told, such as victims of hate crimes and domestic violence or undocumented workers. By reaching out to nonprofit organizations, neighbors, and communities for senior citizens, teachers can help students connect with everyday people who have fascinating stories.

Carefully chosen oral history topics can also help create links between various academic subjects. When he taught at Berkeley High school, in Berkeley, California, Rick Ayers, author of Studs Terkel's Working: A Teaching Guide, used oral histories to bridge his history and literature lessons. For a segment on the Vietnam War, while his students were reading The Things They Carried, a fictionalized memoir written by a U.S. Army veteran, Ayers asked his students to interview people who had some kind of connection to the war.

Teachers who use oral histories in their classrooms agree: Just about anyone can be a great interview subject. Says the University of Delaware's William Scott, "You want someone with expertise, which, when it comes down to it, is everyone."

That being said, Scott recommends that students interview someone they know well and with whom they'll feel comfortable. Teacher Eunice Nuval notes that peer interviews work well because students are familiar with one another, which has the added benefit of eliciting more candid responses. "When they interview each other, they're so honest," she notes.

But pushing students out of their comfort zones can also yield exciting results. In Nuval's class, she reports that some of the most interesting oral histories emerged from students who spoke to people of a different race. Meanwhile, Ayers has asked small groups of students to interview day laborers, which his students initially found intimidating because they'd had limited interaction with these men. "It's about putting them in the community for a reality check," he says. "The students were always amazed at how normal these guys are."

Examples for Every Classroom

Here are some straightforward strategies for integrating oral histories into any lesson plan:

Provide the interview subjects. Invite a guest speaker to the classroom with experience relevant to the curriculum. Instead of having the guest give a lecture, ask the students to interview him or her.

Prepare for the speaker's visit by teaching students the difference between closed questions and open questions. Help students create a list of questions they will ask in an agreed-on order, and direct them to take notes on the speaker's responses. Afterward, ask the students to discuss how their initial expectations of the activity compared with the actual interview, and talk about any differences between textbook accounts of the topic and the speaker's experiences. Students could also use the interview as a jumping-off point for journal entries. Be sure to have students write thank-you letters to the speaker at the end of the segment.

A variation on the assignment is to invite three or four people to the classroom with different perspectives on a single topic. Ask students to prepare questions for each interview subject, then give them ten minutes to conduct interviews with each guest in small groups. Students can share their findings in jigsaw fashion.

Extend the project. To deepen oral history projects and to make them even more meaningful for your students, follow these steps:

Other strategies for sharing the oral histories with a larger audience include dedicating class or homework time to reading other students' oral histories, sending copies of the narratives to local schools and libraries, or creating classroom or campus exhibits based on the project.

There are a number of innovative ways to transform the oral histories into new projects. William Scott's eighth-grade students, for example, recorded oral histories about violence and subsequently created a play based on them. By combining photography, text transcripts, and streaming audio of the interviews, Nuval's students will make multimedia presentations of their oral histories this school year.

The American Memory: American Life Histories page from the Library of Congress offers nearly 3,000 life histories the Works Progress Administration compiled between 1936 and 1940.

Foxfire presents a collection of books featuring stories of southern Appalachian culture collected by high school students since the 1960s as well as information about its student-centered teaching methods.

Keeping the Struggle Alive: Studying Desegregation in Our Town, A Guide to Doing Oral History

The Neighborhood Story Project, in New Orleans, works with students to document their neighborhoods, including those destroyed by Hurricane Katrina and its aftermath.

Through StoryCorps, tens of thousands of friends and family members from across the country have interviewed each other since 2003. Their stories are archived in the Library of Congress, and you can hear them on the project website. StoryCorps has also issued a book and CD called Listening Is an Act of Love.

Voice of Witness offers a series of oral history books that illuminate human rights crises worldwide. The site offers curricula for two of the books.