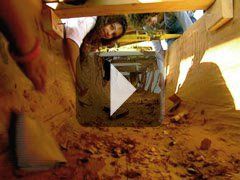 On a bright Seattle Sunday, Sáádúúts Peele, a master carver originally from Hydaburg, Alaska, surveys his work party. "Ready? One . . . two . . . three. Woooooo . . . woooooo!" Summoning the collective energy that brought them together to create something magical, the students, teachers, and parents of Seattle's Alternative School 1 lift their 800-pound canoe and slowly march it to a launch site at Golden Gardens, on Puget Sound.

It is an impressive work: a hand-carved, hand-painted 40-foot-long voyaging canoe, just like the Haida vessels that plied the seas of the Pacific Northwest hundreds of years ago.

AS-1's seventh graders have done much of the canoe carving, spending two school-day mornings each month as part of their Native American culture history curriculum. They have also joined after-school and weekend work parties that include other AS-1 students, parents, and community members.

A nonprofit organization, Carving Culture Connections (CCC), founded by Peele, secured a 6-ton cedar log from Alaska and monitored every step of the three-year-long process of transforming it into a traditional voyaging canoe.

"I never doubted the kids," says Peele as he watches the older students shave the log with sharp carving tools. "The teaching is about them having confidence, so I let them use all the tools -- the sledgehammer and wedges."

"The biggest challenge for the children was to live on Indian time," says CCC director Melissa Koch, "to allow for the time it takes to live through a process. They learned that if you keep working every day in a disciplined fashion, as community, you can create something absolutely wonderful."

The canoe was carved at the Center for Wooden Boats, where Seattle residents of all ages come to build, paddle, and sail everything from small model boats to ocean-going yachts.

Former AS-1 principal Ron Snyder initially connected the school to the center through a pond-boat project, where students applied the technique of lofting to create small models of sailing yachts. "Lofting involves scale and proportion, measurement, transferring your measurements, and knowing how to use the tools to transform the wood into an object in exact proportions to a blueprint," says Snyder.

Whether the subject is math or history, he believes the best way to teach it is through hands-on experience. "Experience-based education sticks," Snyder adds. "You really find out not about some twisted figment of history, but about yourself and your relationship to your history."

As the canoe neared completion, the AS-1 students decided to give it to Peele's Native American tribe -- and deliver it to them in Hydaburg. To help prepare students for the trip, Snyder gave them a crash course in traditional paddling. "It's important, as warriors, to look good," he told the seventh graders, listening with paddles and lifejackets at the ready. "And you'll present yourselves as warriors, as a proud people."

During the practice paddle that followed Snyder's talk, he noticed that though the group's technique could be improved, its spirit was impeccable. "They really got how sharp they looked and how powerful they were," he says. "There was a tremendous aura of pride in that canoe."

The living-history lesson culminated in April 2004, when the canoe was shipped to Hydaburg, ceremoniously carried into the village, and paddled ashore by the students of AS-1. For Peele, it was the fulfillment of a vision that had come to him in a dream. "It made my heart cry with joy to see the cultural connection when my people were standing on the beach waiting to receive the canoe," he says. "It touched everybody on both sides of the connection."

For AS-1 parent Susan Hoyt, the project was the best kind of learning experience. "I just loved the idea that kids could study Northwest native canoe culture not just from textbooks and lectures, but also from meeting people, getting into the culture, producing a canoe," says Hoyt. "It's really an integrative form of learning: the mathematical stuff you need to work on the canoe, the woodworking training, and learning how to work cooperatively in a group. It just seemed like an opportunity that I as a parent didn't want to pass up."

AS-1's carving connection continues today, with three more logs in various stages of becoming canoes at the Center for Wooden Boats. For Peele, the success of the canoe project underscores the value of hands-on learning.

"We're cutting too many things out of the children's lives -- working with their hands, mind, and spirit," he says. "We can't keep them on the side and expect them to learn. They have to have hands on, be part of it. We could tell this story, but if they practice this story and do it hands on, it's a living story, and that's why they want to be part of it."

But Can They Pass The Test?

Though there is little doubt that their living-history lesson will stay with these students for a lifetime, it doesn't mean they can ace a paper-and-pencil test on the subject. In fact, AS-1 standardized-test scores are comparatively low -- partially because the majority of students opt out of taking Washington's state exams and consequently receive a grade of zero. Believing that the tests don't properly gauge the value of time spent on projects such as the canoe effort, AS-1 is part of a growing movement in the state to develop alternative forms of assessment. 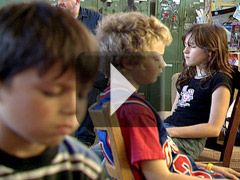 Formed as an alternative school in 1972, AS-1 has often bucked convention. One of its first principles was: "We will listen to our children, and we will adapt our systems to them." That tradition continues today with the Forum, an elective class in which students from every grade come together to speak their minds and help each other resolve their differences.

Like the Canoe Project, the Forum teaches invaluable lessons in cooperation and self-respect. "People learn to listen to each other," says Forum teacher Debra DiDomenico. "They learn that there's another avenue besides hitting or screaming or yelling, or going to get someone. The children learn that they can become empowered and that they can take care of their own stuff." For many at AS-1, that is the ultimate test.