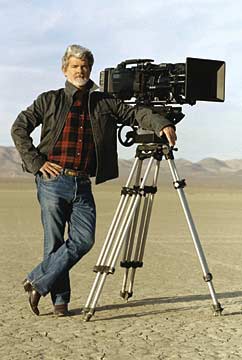 In the rolling hills of California's Marin County grows a brittle amber grass known for one thing: its combustibility. If ignited, this thigh-high tinder burns furiously, rapidly consuming everything in its path.

The same can be said of the filmmaker who calls these hills just north of San Francisco his home. George Lucas is regarded as one of the legends of American cinema. By the mid-1980s, he had made a number of blockbusters, including Star Wars, American Graffiti, and Raiders of the Lost Ark. Released in 1977, Star Wars is still one of the top-grossing films of all time.

Just as Lucas once envisioned new intergalactic worlds, today he envisions a new world of learning. He grew up one-hundred miles inland from these coastal hills in the searing heat of Modesto, California, tinkering with cars and helping out at his dad's stationery store. He was, he recalls, "an average student who daydreamed a lot." It is perhaps those early memories of unfocused ambition that have infused him with a desire to promote a new way of learning that prepares students to succeed in a highly wired and visual world.

Lucas habitually dresses in jeans, sneakers, and work shirts -- a man looking like there is much work to be done. For the American educational system, he says, that work must begin now.

What do students need to be learning that they're not?

They need to understand a new language of expression. The way we are educating is based on nineteenth-century ideas and methods. Here we are, entering the twenty-first century, and you look at our schools and ask, 'Why are we doing things in this ancient way?' Our system of education is locked in a time capsule. You want to say to the people in charge, 'You're not using today's tools! Wake up!'

What would you change?

We must teach communication comprehensively, in all its forms. Today we work with the written or spoken word as the primary form of communication. But we also need to understand the importance of graphics, music, and cinema, which are just as powerful and in some ways more deeply intertwined with young people's culture. We live and work in a visually sophisticated world, so we must be sophisticated in using all the forms of communication, not just the written word.

When people talk to me about the digital divide, I think of it not being so much about who has access to what technology as who knows how to create and express themselves in this new language of the screen. If students aren't taught the language of sound and images, shouldn't they be considered as illiterate as if they left college without being able to read or write?

Unfortunately, most learning institutions find that idea very difficult to swallow. They consider the various forms of nonwritten communication as some type of therapy or art, something that is not relevant to the everyday life of a student. This is wrong.

You can measure verbal or math skills by determining whether a student is right or wrong on a test -- in other words, whether they're learning or not. With visual communication, some might argue it's trickier to measure progress and competency.

In music, if you want somebody to feel sad, what kind of a chord do you use? A minor chord? A major chord? We know that a fast rhythm makes you feel one way and a slow rhythm makes you feel another. If you want to get somebody excited, you use one kind of rhythm; if you want people to feel important, you use another. If you're going to put together a multimedia project, you need to know that you can't have a fast rhythm track if you're talking about death. It just doesn't work. You're not communicating well.

Knowing these things is as important as knowing what a verb and a subject are, what a period and an exclamation point mean.

How do we bring these lessons into the classroom?

We need to look at the whole world of communication in a more complete way. We need to take art and music out of "the arts class" and put it into the English class. For instance, the various forms of communication form a circle. On one end of this circle is math, the least emotional of all forms of communication. It's very strict and very concise, and has a very precise way of explaining something. Then you start moving around the circle, and you get to the other end, where we have music, which primarily appeals to your emotions, not to your intellect.

One of my concerns is that we're advancing intellectually very fast, but we're not advancing emotionally as quickly.

What's at stake if this understanding doesn't make its way into the classroom?

You're already seeing it. You often see very educated people -- doctors and lawyers and engineers -- trying to make presentations, and they have no clue about how to communicate visually and what happens when you put one image after another. So their lectures become very confused because, from a visual perspective, they're putting their periods at the front of their sentences, and nobody understands them.

It seems that there have always been two parallel paths in education. The first is the formalized path of the schools. The other is the knowledge of the street, the information gained outside of school. Is the information students now gain outside the classroom more in touch with learning the language of motion and sound and graphics?

Students understand that they need to have these skills in order to exist in this world, so they're way ahead of us. Most kids relate to each other through music or graphics. They are regularly bombarded with images and sound. Most of their awareness comes through the language of moving images and cinema. That's why it's so important that they learn the language of it.

In most formalized education, graphics in cinema or music training is taught as a craft or discipline. That is, you learn the notes so you can read music and play a song. But that doesn't teach you how to express yourself. What I'm talking about is learning the grammar, but also learning how to express yourself. When you are trying to write a paragraph and you want to get a point across, how do you clearly make your point? What does your first sentence say? What does your last say? Take that and apply it to graphics.

Some might say you're being too idealistic, that the schools don't have enough money for pencils. Shouldn't we focus on that first?

Education is based on a whole number of issues, and two of the most important are, what are the kids learning, and why are they learning it? The educational foundation, though, tends to be based on what you are going to accomplish, rather than how and why.

We have to ask, What is important for the kids to learn? The old idea of education as a way of storing facts is not that significant because nobody can store the number of facts there are. Every year it seems to double. Instead we need to teach students how to tell a story. It's not enough to learn geometry; you have to learn how to build a house. We need to treat the language and grammar of the screen exactly the way we learn writing or music or painting.

Where did your passion for education come from? What kind of student were you growing up?

I was an average student who daydreamed a lot. I had a very hard time with education, and I was never described as a bright student. I was considered somebody who could be doing a lot better than I was doing, not working up to my potential. I wish I had known some of these rules back then.

Do you think the education field will get your message?

I hope so. Right now we are having a huge paradigm shift, on all fronts, from analog to digital. The business world has pretty much accomplished this already, and education is still taking its first baby steps in this direction. This is more than just teaching kids how to use computers. Kids already know this. They know how to use computers before they get to school.

There is one major hurdle, though. The business world thrives on change. If you don't change, you don't improve, and you go out of business. The education world, it seems, thrives on stability and limiting change. There seem to be an awful lot of people protecting the status quo.

People seem to forget this fact, and often these are the same people who are running the society. They would rather spend money on the military than on the educational system, unaware that the military will bring them zippo. It's not a great idea to want to take over the world if you don't know what to do with it and how to run it. Nothing is accomplished through conquest. Everything is accomplished through education.