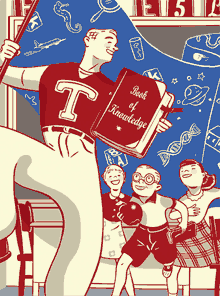 On the west side of Cleveland, in a residential neighborhood called Ohio City, there is a concrete block of a schoolhouse that dwarfs the surrounding homes. In a windowless room at the heart of the school, a twelve-year-old boy is testing a hypothesis about mass and aerodynamics. The child is from Puerto Rico, and he speaks, maybe, ten or twenty words in English. He stands at the back of the room, behind the clustered desks, next to a storage closet. In the fingertips of his left hand, which is raised to the level of his ear, he gingerly holds a paper airplane. He throws it.

His teacher, Lisa Suarez-Caraballo, watches him, beaming. "I have a rule about paper airplanes," she explains. "You can only throw them at the appropriate place and the appropriate time." Here, that means at the airstrip at the back of the room -- a tape measure fastened to the floor -- and during an experiment.

The student walks to where the plane landed, and he stoops low to see how far it flew. "Seis cientos y setenta . . . six hundred and seventy," he says, providing the measurement in centimeters. It's a fairly good flyer.

The students have all flown and measured several flights of their planes, and now they'll analyze the data, plot it on graphs, and use scientific calculators to find arithmetic means, ranges, and various quartiles.They do much of this at their desks, in groups. At times, Suarez-Caraballo brings their attention to the smart board at the front of the classroom -- a computer-assisted whiteboard without the headache-inducing stink of traditional whiteboard markers. There, she'll walk them through part of the process, or ask a student to demonstrate what he or she knows how to do.

For many teachers, the learning process involves much more than requiring students to rapidly digest and then regurgitate facts and figures. For many, teaching is about coaching -- understanding the specific needs and skills of each student, and then, to a certain extent, teaching them individually. For even the best teachers, it's a constant struggle to find the balance between teaching to the whole class and coaching one-on-one.

You learn best when you make sense and make your own meaning. So, I try to give my students experiences. For example, when I'm teaching integers, I don't teach the kids the rules for adding and subtracting integers. Instead, I show them how to manipulate blocks, how to make it zero by taking away and adding. Today, I had some kids asking me, "I can't remember -- what do you do with this minusing a negative?" and I say, "Well, remember the blocks."

I try to give them experiences to draw on so when I'm not there, they'll do the same thing. The rules, they'll forget. But if I can get them to remember the blocks, and make a little picture or whatever, then they can re-create the rule themselves.

Not only do I want to coach them, but I want them to learn to coach each other, too. "You have plenty of other experts in this classroom," I'll tell them, and I'll point out someone who has figured that out. "Johnny's an expert in this. If you need help, ask him."

I have a couple kids who, when you tell them a rule, they'll never forget it. But not everybody learns that way. So, I spent a lot of time figuring out the kids' strengths and weaknesses, and trying to give them as many experiences as possible. That way, they'll remember what you've taught them.

Correct answers and correct processes seem easier to discern in some subjects than in others. Take history, for instance. It's a discipline of evaluating information. How, exactly, do you coach students to do that? Beyond that, how do you make historical persons such as, say, steel tycoon Andrew Carnegie relevant to high school students?

In San Francisco, one social sciences teacher uses the Internet as a place to coach students in evaluating the quality of information available. As his students deepen their understanding of historical eras, everybody -- including the teacher -- takes on a role to literally flesh out historical characters.

The word coach takes on a different meaning when using the Internet. Students, researchers, and teachers all need help guiding them through this massive and sometimes confusing web of information. I make it a point to teach students what I call Web literacy -- that is, learning what is valid information and what is not valid information.

I also get students to talk to each other via a blog. My idea is to get kids talking about issues that are important in the world and showing them that the Web is not just a place for emailing and instant messaging. It's a place where real connections can be made and your voice can be heard. Hopefully, I'm giving them inspiration to take that voice further to show that their ideas have real meaning, that their ideas have real value in the world.

In addition to using technology to coach effectively, teachers will sometimes coach by divesting themselves of their teacherly authority, joining their students in an activity and becoming part of the team.

Right now, we're learning about the progressive era from the 1880s to the 1920s, and the students are taking a look at different personalities of the time -- people such as Andrew Carnegie. They're learning a lot about these characters by playing them; they actually act them out.

This works. They get really excited. I see how happy they are to do this kind of work, instead of sitting there and listening to me lecture or having to take notes from a book. I became the mediator for their discussion. They basically drive the content. They have some ownership in the class.

Some teachers say coaching (rather than lecturing) allows them to focus on what each student needs, particularly when it comes to learning to become a better writer.

I prefer to sit down and talk to a kid one-on-one. You have to be able to trust that the other kids will work independently while you're having these individual conferences. You have to train the kids to understand how it works. Unless it's something seriously important, they must rely on each other rather than coming over to me. They need to be patient and understand that their time will come. They know that when it's their turn, they want my undivided attention.

The notion of teaching as coaching is not new. Effective teachers and their supportive colleagues have long worked to support their students more fully than the traditional teacher-as-lecturer model allows. These teachers work to break their lessons down into pieces small enough for each student to manage, and they simultaneously coach their students to grapple with new skills and new information.

But some who have been in the education world long enough to have a somewhat historical perspective see a threat to this kind of teaching resulting from the emphasis on standardized testing. It's not that testing is all bad, but too much testing doesn't leave much time for being a good coach.

In the past, what was honored in teaching was to be a thoughtful teacher. And you gravitated toward your colleagues who were thoughtful, who really valued thinking something through. That way, if you taught something and it wasn't successful, you could go back and discover why.

But now there are so many exterior pressures for kids to do well on accountability measures such as standardized tests that teaching just doesn't lend itself to thoughtful practice. You have to think, "If I'm going to do this thoughtful lesson, that's going to take two weeks," or ask yourself, "Do I have to do all this test-prep stuff?" -- that's important, too, because kids have got to take this test, and the results become so public. But those kinds of accountability measures are an obstacle to meaningful learning. You're on a much faster treadmill.

My worry is that all young teachers are exposed to is doing this kind of regimented teaching, and they haven't had the practice in being thoughtful. I'm working with new teachers in San Francisco and Oakland, and they're really reliant on the textbook, which marches them through the curriculum. When I say, "Well, let's plan this unit together," they don't know what I'm talking about. "What do you mean, 'plan the unit together'? I just start from page one of the chapter and march right through."

We're not fostering any thoughtful processes for teachers. You know, you can own this material. And, by owning it, you can do with it what you want. In some places, they're not part of an environment that actually discourages that kind of conversation.

Accountability and coaching in the classroom aren't mutually exclusive. When teachers have time and support, when coaching is a part of the culture of a school, or when they simply make it a priority, teachers can become encouraging mentors. And there may always be a time for whole-class instruction, particularly when new concepts are being introduced.

Coaching works a number of ways. In Lisa Suarez-Caraballo's Cleveland math classroom, she coaches her students through the discovery of mathematical rules and algorithms, and she fosters team building by directing her students to see each other as resources, as coaches themselves. In Amy Frangipane's classroom, editing workshops serve as a kind of individualized writing-coach sessions. And Joel Arquillos transports the students back in time in order for them to think critically. What these classrooms have in common is the students' wide range of abilities. In those situations, coaching -- acting as a mentor who cares and has high expectations -- is not only important to learning, it's critical.

The best coaching I ever got was when my cross-country and track coach would leave the pack (because I was always behind) and run with me. And when he ran with me and he said, "Okay, now, I'm going to pick up the pace a little bit, and I want you to pick up the pace, and I want you to run with me, and I want to see what happens to your form when we're going faster." So there's this individuation of instruction that is really available only to someone who cares enough about the teacher to accept it. I think individuation is worthless if the students aren't listening. You have to telegraph this love to them. You can push them and be really hard on them if you're sort of telegraphing this kind of love.

And it's all with a smile, so they know she's saying, "I care about you. You're doing this for me, but you're doing this for yourself, and this is how it matters to the community, because we need to do x, y, or z with it." And it just makes sense to the kid in this really personal way. I learned a lot from watching her in her classroom. You get that right only when they know that you are in fact in it for them, and you're on their team.

Taking a risk with your ideas is the only way you learn something. Admitting you don't know something -- to yourself or in a more public forum -- is a really powerful way of beginning to learn, and you can't do that if you're worried about what the teacher's going to think. I try to never say to a student, "That was wrong." I'll say, "Well, that's interesting. Can we build on that?"

Daniel Moulthrop, a former high school English teacher, is a host and producer for WCPN, the NPR station in Cleveland, Ohio. They are co-authors, along with Dave Eggers, of Teachers Have It Easy: The Big Sacrifices and the Small Salaries of America's Teachers.