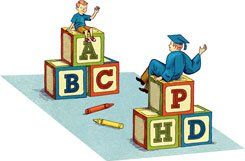 Ever since the first kindergarten opened in 1837, it has been a place for telling stories, building castles, painting pictures, making friends, and learning to share. But kindergarten is undergoing a dramatic change.

In today's kindergartens, children are spending more and more time filling out worksheets and drilling on flash cards. In short, kindergarten is becoming more like the rest of school.

Exactly the opposite needs to happen: We should make the rest of school (indeed, the rest of life) more like kindergarten.

What's so special about kindergarten? As kindergartners playfully create stories, castles, and paintings with one another, they develop and refine their abilities to think creatively and work collaboratively, precisely the abilities most needed to achieve success and satisfaction in the 21st century.

Underlying traditional kindergarten activities is a spiraling learning process in which children imagine what they want to do, create a project based on their ideas (using blocks, finger paint, or other materials), play with their creations, share their ideas and creations with others, and reflect on their experiences -- all of which leads them to imagine new ideas and new projects. This iterative learning process is ideal preparation for today's fast-changing society, in which people must continually come up with innovative solutions to unexpected situations in their lives.

If this approach is so well aligned with current societal needs, why do we so rarely support it in classrooms? One reason is that our society and our educational system don't place enough value on creative thinking.

Another reason is a lack of appropriate media and technologies: Wooden blocks and finger paint are great for learning kindergarten concepts (such as numbers, shapes, sizes, and colors). But as children get older, they want and need to work on more advanced projects and learn more advanced concepts. To do that, they need different types of tools, media, and materials.

In my research group at the Media Lab at the Massachusetts Institute of Technology, we've been developing new technologies specifically to support the kindergarten approach to learning. For example, we've collaborated with the Lego Group since 1985 on a collection of robotics construction kits that enable children to imagine and create interactive inventions in the same spirit as kindergartners build towers with blocks.

Recently, we've developed a new programming language called Scratch, which brings the kindergarten learning approach to the computer screen. With Scratch (available as a free download), children can create their own interactive stories, games, and animations and then share their creations on the Web. A vibrant online community has developed around Scratch, as users present more than a thousand new projects on the Scratch Web site each day. Some 250,000 people participate in the community, most of them ages 8-16.

One active participant in the community is a 13-year-old girl with the name BalaBethany (not her real screen name). As her first Scratch project, BalaBethany created and shared an animated story with anime characters. Other members of the online community responded positively, posting glowing comments under her project. Encouraged, BalaBethany began to create and share new anime stories on a regular basis, like episodes in a television series.

BalaBethany periodically added new characters to her stories. At one point, she got an idea: Why not involve the community in the process? She created and uploaded a new Scratch project that announced a contest: She asked other community members to design a sister for one of the characters. The project received more than 100 comments. One was from a community member who wanted to enter the contest but didn't know how to draw anime characters. So BalaBethany produced another Scratch project: a step-by-step tutorial that demonstrates a 13-stage process for drawing and coloring an anime character.

I see BalaBethany as a case study of lifelong kindergarten. She is using Scratch to imagine, create, play, share, and reflect. In the process, she is refining her programming and artistic skills -- and she's developing as a creative thinker. Our ultimate goal is a world full of playfully creative people who, like BalaBethany, continue to learn as kindergartners do.

Mitchel Resnick is director of the Lifelong Kindergarten group at the Massachusetts Institute of Technology's Media Lab.