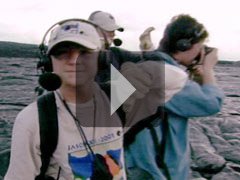 Editor's Note: Since this article was written in 2002, the JASON Project has become a nonprofit subsidiary of the National Geographic Society; the curriculum was completely redesigned in 2007.

JASON no longer does an annual satellite broadcast, but both of the newly designed curriculum units have won a number of awards, including the Software and Information Industry Association's 2008 CODiE Award for Best Online Instructional Solution for the free online curriculum Operation: Monster Storms.

Once a year, Beverly Battle's Washington, DC, sixth graders travel across town to participate in the latest JASON Project expedition of Robert Ballard, the oceanographer and explorer probably best known for his 1985 discovery of the wreck of the Titanic.

Armed with well-researched questions, the youngsters are treated to a satellite visit with Ballard and fellow JASON explorers -- students and adults known as Argonauts -- who may be excavating an ancient rain forest site in Colorado, studying the underwater propulsion of puffins in Iceland, or examining tubeworms in Mexico's Sea of Cortez.

Live from a Volcano

Via satellite, JASON Project founder Bob Ballard and a student Argonaut share their live-from-Hawaii experiences with students around the world.

On this particular winter day, Ballard is 5,000 miles and what seems like a million climate zones away from the nation's capital on the Big Island of Hawaii. Volcanoes are the main attraction, but the explorers also are tracing the migration paths of the state's diverse population, cultivating native plant species on a wildlife refuge, and capturing albatrosses for the purpose of outfitting the winsome seabirds with identification bands.

Battle's Harriet Tubman Elementary School students have an hour to watch a live satellite feed and hear if one or more of their questions are asked of Ballard and his student and adult colleagues. "Kids listen to kids, so we like to integrate them into the program," Ballard says.

The Tubman students are well prepared, having begun research on Hawaii the first week of school. They have researched volcanoes and Hawaiian culture. They have read novels with Hawaiian themes. They have studied the flora and fauna of some of the Hawaiian Islands, and they have conducted classroom variations of experiments the Argonauts will be conducting in the field. They had earlier chatted, via the Internet, with a Hawaiian entomologist.

Eager to be Explorers

Ballard got the idea for the JASON Project, named after the heroic sailor-adventurer of Greek mythology, after he received 16,000 letters from students who were captivated by the Titanic discovery and essentially wanted to know how they could follow in the intrepid scientist's footsteps.

Teacher Beverly Battle joins her students in an experiment about volcanoes.

"Kids are born scientists. They have that flame of curiosity," says the famed adventurer. "Unfortunately, our system has had the ability to turn that curiosity off."

Ballard wanted to capitalize on children's innate curiosity and at the same time challenge them to become sophisticated researchers and learners. "The idea is this: They will study a pretty tough curriculum -- interlocking curriculum -- science and chemistry, math and physics and biology, engineering sciences, social sciences as well. And then at the culmination of their studies, near the end of the year, we'll do an expedition live for them."

By taking huge numbers of students to remote parts of the world through technology and involving them in real explorations, Ballard estimates he has turned five million kids on to science since the program began.

Battle and Gwendolyn Faulkner, former technology coordinator at Tubman, say they have witnessed profound, positive changes in Tubman's inner-city students, 97 percent of whom are from low-income households and 41 percent of whom speak little or no English.

Students in Battle's class do a classroom version of an experiment on the different shapes of birds' beaks.

"I've seen test scores of students rise because of the engagement in project learning," says Faulkner. Project learning, she believes, creates an interest and excitement for learning that inspires students to delve deeply and learn more.

Youngsters' fascination with technology and Tubman's commitment to using technology in projects and other real-world applications (each classroom has 5-6 computers) add to the success of programs like JASON, she says. The JASON Web site is so inviting and offers so many interesting challenges to students, they aren't tempted to seek out games or other nonacademic computer pursuits.

"I saw my students mainstream out of the English as a Second Language program into the mainstream classroom," Faulkner says. "I saw my mainstream students scoring three and four grades above their grade level on standardized tests. And so, yes, I know it works. I'm a convert."

JASON, says Battle, brings the world into a classroom while helping close the digital divide and improve students' academic, cooperative-learning, and social skills, which leads to fewer discipline problems. Working on projects in conjunction with JASON and using the computer to do those projects brought one student who spoke no English when he arrived at the school so out of his shell, she adds, that he is now proficient in English and an eager participant.

"He is no longer the shy student who did not want to talk when I called on him," Battle says. "Now he's eager to answer all the time."

"We get to interact more with each other and with the teacher," the now-enthusiastic student says. "It's fun."

Assistant Principal Sharon Bovell believes part of that fun has to do with having a say in the direction of a project. Project learning, she says, "gives them choices. And they see learning as something that is adventuresome as well as fun.

"When they start a project or concept to develop, they don't know where it's going," she adds. "Then, all of a sudden, new and interesting facts come out. That kind of excitement stimulates kids -- gives them an opportunity to say, 'I can do this.'"

Battle says she adopted project learning when she found that she was tiring of the lecture format. "And I said, 'I know if I'm tired, my children are tired of it.'" JASON makes it easy, she adds, because it comes with professional development and a complete curriculum attuned to state standards.

"Everything is there for you," Battle says. "Multidisciplinary. Multimedia. It's got assessment. It's got hands-on. Everything a teacher would want is in JASON."

Battle was even more prepared for the Hawaiian project because she was among a group of teachers who did field studies in Hawaii for ten days days in the summer before the project started. The teachers investigated botanical gardens, hiked on lava, and walked into -- and out of -- a caldera.

The Benefits of Technology

Technology plays a major part in every project, both for the JASON Project as a whole and for Battle's class. Besides the satellite, the JASON Project employs a range of technologies, from videos and fully interactive Internet programming to broadcast footage and online tools.

Technology has even allowed students to operate an underwater robot from thousands of miles away. Battle's students use digital cameras, scanners, Microsoft PowerPoint presentations, slides, art software, and spreadsheets to help build a portfolio. They keep an online journal about their work.

Having studied Hawaii for months, Tubman students are eager to have their impressions confirmed from the field.

An important benefit the students take away from such projects doesn't always show up in the portfolio, says Faulkner. "We are always hearing that companies want workers who are team players, who are able to go out and be problem solvers."

The JASON Project and other project learning that uses technology as a tool produces just such citizens, she says. "The students learn to be lifelong friends, to respect one another's cultures. So there's so much that grows out of project learning. It's just as important as the content that they are learning."

Important as those skills are, Ballard points to the interest in more rigorous science as one of the prime benefits of the JASON Project. Enthusiastic as students were about the Titanic discovery, he adds, they "were not making the connection between the scientific adventure I was having and the dues I had to pay to live that adventure." JASON has opened many students' eyes to the need to stretch themselves, to take more and challenging science classes, to not be afraid of failure, and, above all, to find a passion.

"All explorers are driven by a dream, a vision, an idea," Ballard says. "And I think the key is to teach kids to pursue their dreams."