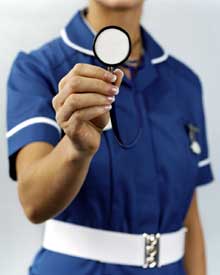 They troop into Mrs. Maffia's office without letup, complaining of coughs, cramps, skinned knees, headaches, and playground bruises. A fifth grader has a rash spreading across his face and neck. A third-grade boy threw up in class. A kindergartner with a long black braid tied meticulously in purple ribbon holds a wad of bloody paper towels. Her nose is gushing for the third time today. "When I'm bleeding," she says sweetly, "my soul hurts."

Marie Pompeo-Maffia, the nurse at PS 8, in Jersey City, New Jersey, will minister to the bodies and souls of forty children (and two staff members) on this autumn Monday. Most of her patients will require nothing more than a Band-Aid, a menstrual pad, or a "magic pretzel." But a growing number of children here and throughout the country have serious medical conditions that cannot be treated with a pretzel, however fanciful the name. The dramatic increase in chronic illnesses, behavior disorders, and learning disabilities has not only complicated the jobs of nurses in schools fortunate enough to have one, the deluge has also raised troubling questions about the care of students in schools -- and there are plenty -- with no health professional on site.

"The school nurse used to be all Band-Aids and iodine," says Michael Venutolo, supervisor of athletics and school nurses for the Jersey City School District. "Now, it's a multitask office. Every one of my nurses is like a mother, father, confessor -- and, in most instances, they're the primary health care provider for the students in our district."

About 15 percent of children suffer from at least one chronic illness, according to the National Institutes of Health. Asthma is the most common; about 13 percent of children -- nearly twice as many as in 1980 -- have been diagnosed with the ailment, according to the National Center for Health Statistics. The incidence of diabetes among children is climbing, too -- not only the insulin-dependent Type 1 but also Type 2, or what used to be called "adult onset," which is associated with obesity. These trends translate into many students who need blasts from inhalers during the school day, as well as children who must check their blood-glucose levels, and kids for whom guidance on diet and exercise is literally a matter of life and death.

And that's just the beginning of what school nurses confront these days. Medical advances over the past twenty years mean that more kids survive congenital conditions, such as cystic fibrosis and spina bifida, that used to kill children at the youngest ages. Now, however, laws require schools to place children with physical or mental disabilities in "the least restrictive environment" -- generally, the neighborhood school.

In the past, children with special educational needs or severe illnesses -- the mentally retarded, blind, and deaf, and children with cerebral palsy or cancer -- were shunted to institutions or home tutoring, if they received education at all. Today, those facing such challenges have a seat in the classroom, with their wheelchairs, respirators, feeding tubes, and medication pumps. And, for them, school nurses routinely perform tasks that once took place only in hospitals and nursing homes: changing urinary catheters and suctioning tubes, for example, and monitoring life-saving treatments such as chemotherapy. In addition, almost every school, everywhere, has a midday meds parade, as children march into the nurse's office (or the school secretary's, if there is no nurse) for a dose of prescription medication, often a psychoactive drug to control behavior or lift moods.

School nursing used to appeal to health professionals who liked working with a relatively healthy population. Now, Maffia says, "you see it all." 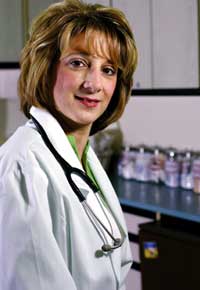 According to estimates based on a nursing survey by the federal Health Resources and Services Administration (part of the U.S. Department of Health and Human Services), 56,239 registered nurses worked in public schools in 2000 -- the most recent year for which data is available. In addition, private or parochial schools employed more than 5,000 nurses. The National Association of School Nurses, which conducts its own rough count, estimates that only 40,000 health professionals practice in the nation's schools. Either way, there are not enough nurses looking after the 54 million children in elementary, middle, and high schools.

The association has established a standard of a full-time nurse for every 750 students as the minimum needed to deliver thorough, effective care in a typical school. (The association recommends a 1:225 ratio in mainstreamed special education populations and a 1:125 proportion among the severely ill or developmentally disabled.) The federal Healthy People 2010 initiative has adopted a ratio of 1:750 as a goal, but few states mandate staffing at that level, and only a handful require school districts to even hire nurses: A 1998 study of middle schools and high schools found that only 32 percent provided a nurse for every 750 students.

Utah has a nurse for roughly every 5,800 students, the worst coverage in the country. California's ratio is 1:2,300, but a growing list of districts there lack a single RN. In a twenty-one-county region of eastern North Carolina, nurse-to-student ratios ranged from 1:451 to 1:7,440. The study, published in the Journal of School Health in January 2004, found that in schools with better nursing coverage, children received more counseling services for social and emotional difficulties such as depression and unintended pregnancy, more services following school injuries, and more follow-up when mandatory vision screening revealed problems. The researchers concluded, "School nurses do make a difference."

When nurses are stretched thin by dividing their time among several schools, illnesses and emergencies often fall into the laps of teachers, secretaries, or "health clerks" trained in first aid and cardiopulmonary resuscitation. This is an alarming arrangement, considering the number of students on prescription medicine. Errors such as missed doses, overdoses, or handing a child the wrong pill are three times more likely to occur when an unlicensed person dispenses drugs to students, according to a survey of 649 school nurses published in the Journal of School Health in November 2000. More than three-quarters of the nurses surveyed said they relied on secretaries, teachers, and sometimes even students to dole out medicine -- often in violation of state law.

Without state-mandated staffing levels, school-nurse positions are vulnerable to budget cuts. Yet some districts continue to add nurses and keep them when money gets tight. Olathe, Kansas -- a rapidly growing suburb of Kansas City -- hires a nurse every time it builds a new school -- and it has opened twelve in the past ten years. Even the smallest elementary school, with 238 children, has a full-time nurse; each high school also has a half-day health assistant. Parents and school officials apparently view nursing as essential, like fire and police protection. "In our community, we're taking care of one-fourth of the population from 8 A.M. until 4 P.M.," says Cynthia Galemore, the school district's coordinator of health services.

In general, schools in the suburbs have better nursing coverage than in cities. Yet school nurses are not simply a luxury of affluence. New Jersey requires a certified nurse for every school "complex," a vague term left to local interpretation: Is a complex a school building? A combination of buildings? An entire district? Camden, the state's poorest city, uses a stringent definition: The district maintains at least one full-time nurse on every campus, thanks to cash infusions from the state. (Camden has thirty-eight schools and 18,000 students, including 4,000 with chronic medical conditions.) For many children, the school nurse is a latter-day Dr. Welby, the closest they come to a health care provider they know and trust.

"Mondays, we get hit hard," says Regina Broadbelt, the district's supervisor of health services. "It's not like in the suburbs, where families call the pediatrician. When our kids get sick on the weekends, they go to the emergency room, or they wait. Monday morning, they are lined up, and they have to see the nurse."

Like Camden, Jersey City has a nurse in every school -- and a post-weekend crunch. By 9:30 A.M. on a Monday in October, Marie Maffia, at PS 8, had sent three children home sick.

PS 8 has 1,040 students, nearly all of them eligible for free or reduced-priced lunch, in preschool through eighth grade. Maffia, a Jersey City native who has worked at the school for twenty years, knows almost every student by name. She also seems to know their siblings, cousins, and aunts -- and sometimes even their dogs. She knows whose mother works where ("Take off your coat, babe," she tells a boy. "It'll be a while before Mom gets here."). She knows whose parents are locked in bitter custody fights and whose are seriously ill. ("I'll get someone to walk you home," she tells a boy whose mother is homebound with multiple sclerosis. Sure enough, fifteen minutes later, he walks out the door accompanied by an aide.)

Maffia also knows her school's statistics: 2 children with spina bifida, 1 with cerebral palsy, 1 who's blind; there are 200 "special needs," 150 asthmatics, 30 with cardiac conditions, 4 with peanut allergies. She has 15 students receiving midday meds, but that number can fluctuate as much as 50 percent from week to week.

Besides the daily dramas in her office, Maffia oversees immunization records and mandated screening. ("Height, weight, vision, blood pressure in preK, K, two, four, six, eight, and hearing once a year K to four and six and eight.") She works with a foundation that tests students' vision and distributes free glasses.

Maffia teaches the occasional health class. ("Yup," she says, "they still ask, 'Where do babies come from?'") She also serves as nurse coordinator for the district, so her phone rings constantly with questions about this new form or that screening requirement.

Like many school nurses, Maffia plays a role in disaster preparedness -- no idle drill in a building that offered a full view, at the start of a school day, of planes ramming the World Trade Center. A few years later, Maffia drove an effort to get PS 8 named as a Homeland Security WeatherBug site. The designation stands as one of her proudest achievements: It put a very cool weather station on the roof, with a 360-degree camera that feeds data on wind and air movements to science classes. In the event of another terrorist strike, the military could commandeer the tracking system.

Closer to the ground, in Maffia's first-floor office across the hall from the principal, a boy shuffles in: "I feel dizzy." Maffia knows he almost never misses school or moans of vague aches and ailments. Out comes the thermometer.

Another boy hobbles in clutching his knee: "We were playing soccer, and someone kicked me in the leg." Out comes the ice pack. He's a regular in the office and, after a few minutes, Maffia dispatches him back to class. "Hey," she calls as he drags away. "You're limping on the wrong leg."

A teacher clutching his stomach slumps into a chair: "I can't hold anything down." "Thanks for sharing," Maffia responds. "Go home."

So things go all day: the cafeteria worker who skinned a finger while cutting chickens, the girl with a scratch on her hand, the boy with a scratch on his neck, the kids who swallow pills at lunchtime, and the kids who simply want to talk. About forty kids, and two staff members, in six hours, thirty-five minutes -- a relatively slow day in this business of soothing bodies and souls. "In the winter, we're really rockin', with colds and flu and falls," Maffia says.

A special-needs student strides in, as he does every day: "I need a haircut."

"Oh," he says, grinning and reaching for a magic pretzel. "I can't be a day without seeing you."