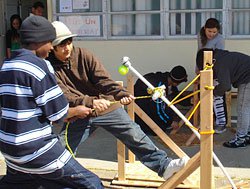 When I heard my friend and former colleague Emmanuel Medina's Algebra I students had built catapults to test their knowledge of quadratic equations and are planning to demonstrate their handiwork, I had to see it for myself.

So, on a mild spring evening, I make my way to Hayward, California, to stand on the darkened field of the Impact Academy of Arts and Technology, a small, brand-new charter high school where Medina's students are ready to exhibit their creations.

I'm treated to a beautiful sight: The night sky is lit up with streaking arcs -- parabolas, to the math initiated -- as the freshmen shoot glow sticks from their catapults. But even more beautiful is the sight of students deeply engaged in learning -- and teaching.

Before the catapult launch, the students start the evening by sharing their work with and explaining quadratic equations and parabolas to more than 200 parents and community members. One team -- Brianna, Steven, and Cody -- describe the catapult project to me.

Steven describes himself as a once-struggling math student, but he points to the hands-on work as an inspiration. "I wrote down quadratic equations before we built the catapult, but until I built and launched it, I didn't really understand," he says.

Brianna chimes in, "Parabolas are everywhere -- in science, technology, and when you shoot a catapult." She then patiently tries to sweep the cobwebs from the math corners of my brain. "When you launch an object out of a catapult, it follows a parabolic path," she explains.

Medina started this project like an old-fashioned math instructor, teaching quadratic equations and parabolas from the California state standards through examples and practice questions. Knowing that this and related subjects make up about a quarter of the math content on California's standardized assessments, Medina used released test questions in this first phase.

Then he introduced the catapult idea by connecting it to other disciplines, thereby piquing his students' interest. "Back in the day, the purpose of studying the quadratic equation was to study the effective use of weaponry," he tells me. "People used catapults up until World War I -- which the kids were studying in their history class -- when it was a tool for trench warfare."

Medina told students they'd be designing and building their own catapults but deliberately gave them few directions. "I knew if they were left to their own devices, they'd surprise me with great designs," he explains. He simply instructed them to find images online by searching for the words catapult, trebuchet, and design. Student teams then decided on the layouts for their catapults, got Medina's approval, and made blueprints with a list of needed materials.

Using $300 in school funds, Medina purchased the materials (mostly PVC pipe, 2 x 4s, plywood, and screws) and borrowed power tools (for which students received safety training). Students used their blueprints to measure out their designs on the materials, and Medina cut the wood for each group using a circular saw.

The students performed the initial tests of their catapults by launching solid Styrofoam eggs, then collected the data. Medina explained to them that they needed to record two pieces of information to find the equation of the parabolas their eggs traced: hang time (the amount of time it was in the air) and distance traveled.

Brianna describes how they followed Medina's instructions to then find the vertex, or highest point, of each parabolic flight. First, she explains, they timed their egg's flight and divided the time by two to find when the object was at the vertex. Then, by measuring the distance the egg traveled along the x-axis -- from the catapult-launch site to the landing spot -- and dividing that distance in half, they identified where the vertex occurred.

Medina taught the students how to use that information to figure the height of the vertex, which allowed them to graph the exact path of the projectile. They could then experiment with controlling where their eggs landed.

"If you know where the egg is going, you can plan to hit targets at a variety of heights and distances based on that one equation," Medina says. Students got so adept at finding this information that they were able to launch their eggs into garbage cans placed at various distances. Meanwhile, to keep students developing their on-paper math skills, Medina gave them related word problems to work on in class.

Using the results of the tests, the students worked to improve their catapults. "We started out with basic weights," Cody says, describing one of his group's posttest innovations. "The catapult was working, but I thought, 'What about tension?'" The group removed the weights they were using and replaced them with bungee cords, which gave their launches more distance, height, and hang time.

Cody says students learned the most about parabolas during this process of perfecting their catapults. "Textbooks are great, but they don't give you the visual," he adds. "You have to go through a process of how parabolas are created, take the data, plug it into a quadratic equation, and analyze it."

Ho Nguyen, a mathematics-curriculum specialist for the nearby West Contra Costa Unified School District, who came to the exhibition, believes that the project has allowed students to gain insight into the quadratic equation. "I think this is a great way to motivate students," he says. "Since it is a fun project, it becomes relevant to them, which makes the teaching and learning much, much easier."

As night falls on the evening of the exhibition, the crowd walks up a small hill to the school's field, where thirteen of the most consistent catapults sit at the ready. When Medina calls out, "Okay, set it up. Let's fire!" students attach thick glow sticks to their catapults' arms, ready to launch them at targets marked by glowing hula hoops on the field.

Cody and Steven hook up bungee cords, launch their glow stick, and watch the bright light fly 40 feet high in a parabolic arc, prompting giggles from little brothers and sisters who run across the field, gathering the launched sticks and the targets.

Afterward, the students talk about their sense of satisfaction at creating something and about what they have learned in the process. "I'm proud to say, 'Hey, I built that!'" says Brianna. "It took multiple steps. It fell apart a couple of times. We misplaced some of our materials. But the end result is, it launches."

"Creating a catapult was not only fun, it was the best learning experience I've ever had," adds Cody. "With a textbook, it's in one ear and out the other. But with the catapult, because it's hands-on, it has stuck with me. It was the process -- playing with it, trying to get to the goal, to make that perfect parabola."