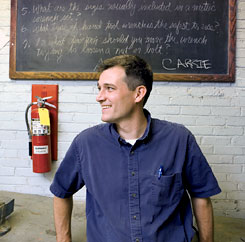 "It's not like a normal team, where you have a chess match or a football game every week," says Hauger. "You're preparing all year. So we look for other opportunities to break up the time and get them exposure."

Area businesses help create those opportunities: Guest speakers talk about career options, and the students get a firsthand look at the workplace with field trips -- not your run-of-the-mill field trips, either; these are crafted for engineering interests. Boeing, for instance, opened up its wind tunnel to let the students test body-modification plans designed to improve fuel efficiency for their car. Such testing would cost a NASCAR team about $30,000, but the company donated the use of the tunnel.

The after-school component showed Hauger -- and the school -- how differently students can respond to an educational opportunity they've chosen, as opposed to one that's been forced on them.

"When an education experience is voluntary, it's much more successful," Hauger says. "It really hit us. The value of education means something different for a lot of urban students, and they need to be convinced that it has value.

"If you have kids who have some sort of inclination, you open up projects where they are able to explore that," he adds. "It makes it about them instead of about external demands. It's different than me saying, 'You need to remember the Pythagorean theorem.' Instead, we used the theorem when we were trying to calculate the length of one of the arms we were placing. And the kids got it. The problem solving is real versus a problem that says, "Train A is going from New York at 50 miles per hour, and train B is going . . ."

The design process is loaded with concepts and theorems that fit under the hood as well as in a textbook. For instance, with the kit car the team used as a vehicle skeleton, each member of the tubular frame carried a certain amount of load. When the students removed certain pieces to transform the car into a hybrid, they needed to design components to support what the original structures would support. That meant working with the concepts of load and force: If a steel pipe 2 inches in diameter carries a load over a length of 1 foot, for example, the new piece needs to support the same load.

To determine how much power the car needed, the team used the equation power = volts x current. The voltage is directly proportional to the speed of the motor, so the chosen motor had a top speed. Voltage was the first decision; with the voltage parameters set, they looked at how much current was needed. If the batteries needed to put out 550 amps, students had to maximize the amount of power the battery could put out while acknowledging limits of space and weight.

"Then there's the variable that mattered most: money," Hauger says. "You find the perfect battery, and it costs $100,000. Then you start over."In terms of structure, the after-school work is divided into small problem groups that come together for the final product, but the students cross over plenty from one area to another.

Hauger finds that the project requires a careful balance of planning and spontaneity. The learning experience needs to be organic, but the teacher has to be ahead of the curve.

"It does take a lot of behind-the-scenes planning and structure -- you can't just say, 'Here's a project, and here's a bag of bolts to do it,'" he says. "You need to have the right tools to move in the right direction: At some point, you know you're going to need a tool to cut the metal, and you need to know that before they do."

He can't predict everything, of course, and that's the beauty of the program.

"It's so much more efficient for me as a teacher to teach the Pythagorean theorem, then go on to the triangle, then on to the next topic," Hauger says. "It's efficient, but it's not effective. With this, there are moments where everyone's learning together, and sometimes there are moments where the kids come up with ideas none of the adults have considered. For me as a teacher, those are the best moments, when the kids outthink us."

Ginny Phillips is a freelance writer based in Birmingham, Alabama. Her work has been published in American Profile, Platinum, Preservation, Frontier in-flight magazine, My Business, and Connect for Kids.