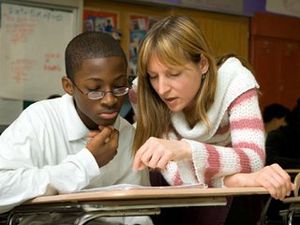 Margot Stern Strom, president and executive director of Facing History and Ourselves, remembers her junior high school civics class in 1950s Memphis: Students memorized the Bill of Rights, and they read about liberty and equality, but no one said a word about the separate water fountains in town for blacks and whites, which put those ideals to shame. Strom calls this disconnect a "betrayal" of history -- and education. "Students know the truth," she says, "and they want to talk about it."

Most educators are trained to teach facts and skills, not engage students in discussions of right and wrong, fairness and justice, values and moral responsibility. Teachers often feel anxiety about touching sensitive nerves: Will the classroom erupt in conflict? Will a child (or parent) take offense? Yet Strom believes that every subject worth learning -- history, science, literature, art, even math -- has moral and ethical dimensions. Exploring these disciplines honestly can invigorate a classroom and help students grow, think, and speak out. Below, Strom and Peter Nelson, head of Facing History's New York office, explain how educators can incorporate moral inquiry into the curriculum:

Bigotry, ostracism, bullying: they happened in Nazi Germany and the Jim Crow South, and they take place in high school today. Instead of teaching history primarily as a set of facts about and actions by leaders, encourage students to examine the choices of ordinary citizens such as themselves: Why did some people conform, and some remain silent, and some dare to protest? Ask students to explore parallels in their own lives and current events. History can help young people understand the present -- and contemporary struggles can help students make sense of seemingly incomprehensible events in the past.

Recognize that no subject is morally neutral.

Build trust in the classroom.

As a starting point, establish basic rules of respect -- and model them. Listen to your students. Challenge ideas, not people. Work with your class to develop a language for moral inquiry. Let no subject be off limits. If a word -- say, a racial slur -- makes everyone squirm, bring it up and encourage the class to decide, together, whether it's ever okay to use, and in what context. Recognize the difference between being safe and being comfortable; students must feel safe, but discomfort will help them learn and grow.

Enlist support from your colleagues and administrators.

This is tough ground to march solo on. "Teachers need to come together and get the same kind of experience that doctors get in grand rounds," Strom says. "They need to discuss race and identity and prejudice -- not avoid them. They need to study subjects they never learned as students."

"History textbooks are watered down," Strom says. "They give everybody three equal pages of good or bad history -- it's like the Victim Olympics." Supplement required texts with memoirs, poetry, essays, and films. Bring in speakers.

Encourage questions, curiosity, and moral struggle. Questions of the head and heart are not readily answered in a forty-five-minute period. Moral inquiry is a journey; opinions and values evolve. Ask students to keep a journal of their thoughts, questions and opinions -- and encourage them to read it every so often to see how far they have traveled.

Have faith in your students.

Strom and Nelson say young people are moral philosophers. "They care about the world they live in," Nelson adds. "They want to belong. They want to do right. They want to make a difference." Help students show their smarts, not only to you or to their classmates but also to themselves.