The sheriff of colonial James City County, Virginia, takes her job seriously, calling forth the candidates nominated to the House of Burgesses while trying to keep voters in line, turning one away because she doesn’t make enough money.

Credit: Alexandra R. Moses
Elementary school teachers get a tour of the Governor's Palace -- a reconstruction of the original, which burned in 1781 -- during their trip to Colonial Williamsburg as part of the historic site's summer teacher institute. 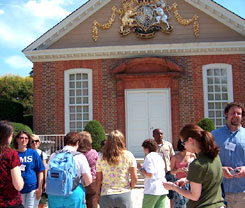 Credit: Alexandra R. Moses
Elementary school teachers get a tour of the Governor's Palace -- a reconstruction of the original, which burned in 1781 -- during their trip to Colonial Williamsburg as part of the historic site's summer teacher institute.

Giddy laughter erupts from the rest of the voters. Of course, she’s not really a sheriff -- and not just because a woman wouldn’t have held that post in colonial times. Like the roughly twenty-five others gathered in this village, she’s an elementary school teacher. And the mock election is the first lesson of the afternoon as part of the Colonial Williamsburg Teacher Institute program.

The institute, in its eighteenth summer, immerses teachers in history for a week. More than just learning facts and dates, teachers reenact history through the eyes of those who lived it, simultaneously acquiring ideas on how to keep their students engaged and how to integrate other subjects, such as math and reading, into their history lessons. Teachers learn about the events leading up to the Revolutionary War, the intricacies of slavery, and the details of colonial life and people, from woodworkers to gentries.

On the fourth day of this group’s visit, the teachers are learning about colonial government, from the court system to a visit from Patrick Henry. Lessons are often given by eighteenth-century characters, such as Henry, or through skits that teachers learn and can later perform for their students back home. During this courthouse trip, the teachers participate in a mock trial, playing plaintiff, defendant, judge, and jury, to illustrate how the court would have handled a case of questionable tobacco in 1774.

Participants say their time at the institute ranks among the best experiences of their professional careers, giving them a renewed desire to spark student interest in history.

“It has given new light to the entire topic, and each day of activities brings on a brainstorm of ideas,” says Vandy Lujan, a fifth-grade teacher at Edmund G. Ross Elementary School, in Albuquerque, New Mexico.

The home base for the institute is Williamsburg, Virginia, but teachers also travel to Jamestown and Yorktown. Tab Broyles, director of teacher development for the Colonial Williamsburg Foundation, says participating in the program makes the teachers feel like they’re on the cutting edge of history. There have even been times when new artifacts have been discovered at Jamestown during a teacher visit.

“Our goal is to give teachers the tools to create what I think are the citizens and leaders of tomorrow,” Broyles says. “We give them ideas on how to replicate everything we do here once they get back to their classrooms.”

When they arrive at the institute, each teacher is given the name of a character from colonial Williamsburg. They’re given primary sources, such as maps, letters, and diaries -- the use of which is emphasized in the program -- and must use these sources to discover more about the character and their life in Williamsburg. Occasionally, the teachers are called on to play their citizen as part of a lesson.

Getting her students into character is just one of the ways fifth-grade teacher Patti Connors plans to make social studies more interesting at her Prattville, Alabama, intermediate school. As a result of attending the institute, Connors says she now has a better grasp of historical details, such as the daily life of a slave or indentured servant, and little things such as longhouse, the proper word for a type of shelter the Powhatan Indians used. “The more ‘real’ history becomes to you as a teacher, the better you’re able to teach it,” Connors says.

Connors and colleague Peggy Simmons already have a list of activities for their students this fall: They plan to let their students make rope, and sea biscuits -- hockey-puck-like bread Jamestown settlers ate during their voyage to America.

Simmons also wants to make historically accurate clothing to help her students travel back in time. And for the school’s Constitution Day, in September, Simmons and Connors envision setting up each fifth-grade classroom with a different activity, and having the day culminate with the signing of the Constitution.

“Hands-on activities really get students involved and keep their attention,” Simmons says. “If you can get children interested in history in the fifth grade, you’ll be planting a seed for the coming years.”

Since the institute’s inception in 1990, roughly 5,000 teachers have spent a week immersed in colonial history. This summer, there are twenty sessions for about 500 elementary school, middle school, and high school teachers.

Most are able to attend thanks to private donors or a Teaching American History grant from the U.S. Department of Education. Participating teachers are also given $100, which covers any necessary materials; a CD-ROM with lesson plans including strategies, primary sources, and audio and video recordings; and an electronic field trip of their choice.

The institute revises its lessons based on teacher input and updates in national social studies standards. Among the topics this summer: indentured servitude and slavery, including the hardships slaves faced on their voyage from Africa; the economy of eighteenth-century Virginia and the role of tobacco; and military life, with a lesson on the daily struggles of a soldier during the Revolutionary War.

Before dinner each evening, the group gathers for a talk -- led by a teacher who has already been through the program -- about ideas for sharing what they learned that day with their students.

Misty Belyeu, a fifth-grade teacher from Wrights Mill Road Elementary, in Auburn, Alabama, and facilitator of this teacher group, tosses a stuffed toy to another participant and asks her to describe how her colonial character would have reacted to the political upheaval of the time. This game, Belyeu explains, can be used in the classroom as a fun way to facilitate participation: After a student answers, he or she tosses the toy to another student to prompt that child’s response.

Belyeu now incorporates primary sources into her history lessons, and feels more prepared to answer those unexpected questions from students. This is her second time at the institute, and she’s still finding ideas she’d like to try, such as the mock election. “It would really help illustrate to my class a step in the evolution of our democracy,” she says.

Vandy Lujan says she’ll now be more comfortable teaching social studies and finding ways to integrate the many topics. “That was always the drawback for me -- I was a little hesitant to explore activities we could do in class,” she says. “But now that I’ve been here and ‘lived’ it, I know I can handle it.”

Teachers who attend the Colonial Williamsburg Teacher Institute leave with ideas for hands-on activities that will engage their students in history. Among the suggestions -- big and small -- for your classroom:

Visit the Colonial Williamsburg Foundation for more ideas and resources for teachers, including podcasts, slide shows, and interactive museum exhibits.