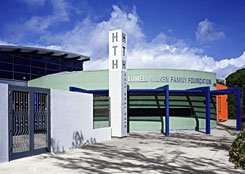 Call a school High Tech High, instead of, say, Benjamin Franklin High or Thomas Edison High -- in other words, name it for technology itself instead of for some enshrined technologist -- and you'll probably want to have the building as purpose driven as the name. This synchronicity of word and fact is brilliantly exemplified by the charter school that occupies an acre of the 71-acre campus of Birmingham High School, in the Los Angeles suburb of Lake Balboa, California.

"Because the school was a public-private venture, we were given a lot of latitude," says Richard Berliner, principal of Berliner and Associates Architecture, in Los Angeles, who designed the school with senior project architect Mike Frey. "We got to do things that typically don't get done in high schools. Because much of what the school teaches is project based, it has a high tech corporate feel. Schools are evolving to reflect the environments people will be working in."

The 27,000-square-foot school, which shares parking facilities and open space with the much larger Birmingham, offers just over 300 students, chosen by lottery, the opportunity to use the latest in digital technology to pursue what Principal Marsha Rybin describes as a "vigorous, real-world curriculum."

The strikingly modern suite of buildings is the result of the determination of Roberta Weintraub, a native Californian who founded the High Tech High -- LA Foundation in 2001 to build the first local charter schools to train students for the kinds of careers they'll be likely to pursue in today's working world.

Funded in part by grants from the Lowell Milken Family Foundation, the S. Mark Taper Foundation, and the Ahmanson Foundation, the school, which opened as an academy in 2002 with a ninth-grade class and became a charter school in 2004, is already academically the highest-ranking school in the Los Angeles Unified School District. This year, it has been nominated for a California Distinguished School award by the state's Board of Education.

Weintraub is justifiably proud. "I served for fourteen years on the Los Angeles Board of Education, and I always wanted to build a school for the twenty-first century," she says. "We don't offer everything other schools offer -- there are no team sports, for instance -- but the education is first class."

Because the architectural plan included the renovation of two existing, little-used buildings on the Birmingham campus, the High Tech High -- LA Foundation obtained a $3 million federal Quality Zone Academy Bond grant. The total budget for the school was $13 million, Weintraub says. "That included the technology," she adds. "Today, it would be double that, or more. But keeping the technology up to date is an ongoing expense. By 2007, we'll have some computers that will be five or six years old, and that would mean the school would begin to lose its edge."

Weintraub, however, is quick to point out that tech is not the main point of the school. "Our students use technology just as we might have used pencils or chalk not that many years ago," architect Richard Berliner says. "The tech in the school wasn't the driving force behind the design -- it was just seen as how kids learn. Our biggest challenge was acoustical, not incorporating technology. That's getting easier all the time. As we were constructing the school, we were able to eliminate a lot of wiring because of the increasing use of wireless applications."

Marsha Rybin, who had been an assistant principal at Birmingham, says one of the major goals was to have High Tech High -- LA "not look like a school. There's a lot of glass, which symbolizes the fact that we want to be transparent and open." Administrative offices, for instance, are connected to the commons/library space by interior windows, so the staff can see out and the kids can see in.

The admission lottery is completely blind, and the faculty doesn't track by ability. The result, Rybin says, is that students can vary from astronomically gifted to learning disabled. But the quality of the architecture seems to raise everyone's ambition and pride. "There's a period of adjustment from the factory model, but the new kids have a kind of boot camp to help them make the change," she says.

"We have three years of classes now, so traditions are being established. It's significant that we don't have graffiti. We had one incident, and the older students held a meeting for the new class, and the message was, 'We don't do that here.'"