One of my friends doesn't wear his seatbelt," confesses Russell Newton. "But I tell him, 'You could get majorly hurt!'"

Russell, a fifth grader at Clemson Elementary School, in Clemson, South Carolina, isn't the only kid coaching his friends and family about car safety. He's one of thousands of K-5 students in three South Carolina school districts participating in the new e-Cruisers curriculum, a tech-driven twist on drivers' ed. 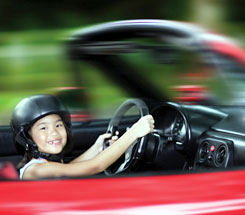 Thanks to e-Cruisers, part of an initiative of the Clemson University Automotive Safety Research Institute (CU-ASRI), students as young as six create podcasts, movies, comic books, and other digital media that revolve around bike and auto safety -- a decade or more before they can legally drive a car.

Kim Alexander, executive director of CU-ASRI, believes such early lifestyle education develops responsible future drivers. "Car crashes are the leading cause of death of Americans between the ages of two and thirty-four," she says, citing research by the National Highway Traffic Safety Administration.

Students determine what it means to be a peaceful passenger, for instance, and "write, storyboard, and videotape possible scenarios, add music, create transitions, and work in cooperative-learning groups to put it all together," explains Kaye Carraway, technology resource teacher at Clemson. "Or they design bike helmets and create a podcast in the form of an advertisement." E-Cruisers is powerful, she adds, because "it empowers children to be part of a solution."

Every spring, Clemson students host an all-day safety fair, where many of the older students collaborate with community members to teach the younger ones in a way that showcases both their work and their public-speaking skills.

"When my son got up in front of these younger children to teach them, I saw a side of him I never had," says Michelle Conley, a kindergarten teacher whose son is in fifth grade. These presentations also have a "powerful impact on the kindergartners," she says, because "they listen to older students in a way that they're not going to listen to adults."

Angie Newton, Russell's mother, says her son's "ability on the computer has skyrocketed" since he dove into e-Cruisers. Now, Russell comes in before school to help Kaye Carraway troubleshoot computer issues, as well as mentor other students during the school day.

This kind of meaningful instruction becomes all the more so, of course, if it saves lives. "I don't accept one death or one injury on the road," says Kim Alexander. "Even if the numbers are coming down, that's still one too many."