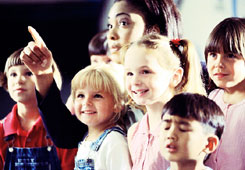 When the administrators of south Florida'sBroward County School District scrambled toaddress the district's acute teacher shortage,they didn't have to look far: The answer wasalready sitting in their classrooms.

The Urban Teacher Academy Program (UTAP) recruitsBroward County teens interested in becoming educators andguides them through four years of rigorous coursework, classroomexperiences in local elementary schools and middleschools, apprenticeships with master teachers, and a debt-freecollege education -- all in exchange for spending three years inthe program and the promise that they will return after collegeto take a guaranteed teaching position in a Broward school.

"We had magnets for medicine, aviation, and law, but wedidn't have any program that prepared young adults to go intoeducation," says Robert Parks, a member of the Broward County School Board and one of UTAP's primary initiators and fundraisers."I'm a teacher by profession, so I thought this model madesense." It made so much sense, in fact, that the model hasexpanded to five county high schools and is being mirrored byseven more counties across the state.

The program creates a crop of urban teachers with stayingpower. At hard-to-staff schools in low-income districts, newteachers often burn out within a few years, and for BrowardCounty natives, the challenges of urban schools are familiarterritory. "They know the community; they're knowledgeableabout the school district," says Parks. "So there's a reallyshort learning curve."

The curriculum is also highly tailored and focused, andoverflowing with technology, one-on-one mentoring, and extensivefield experience, giving students a leg up on their intendedcareer. In ninth grade, for instance, thefuture educators create lesson plans andteach elementary school students inteams. By junior or senior year, they arestudent teaching on their own while in amaster teacher's class.

The vast majority of UTAP students -- more than 90 percent, says Berg -- arealso the first in their families to go on to higher education. A commitment to send these studentsto college empowers a generationof youth whose goals may not otherwiseextend beyond high school. From the firstday, UTAP staff take students on fieldtrips to partnering four-year universities,help them navigate grade point averages,financial-aid systems, and college-preparatoryexams, and encourage themto develop short-term and long-termgoals, so that a college education quicklybecomes both tangible and attainable.

When they enter elementary school andmiddle school classrooms as positive rolemodels, their tenacity and self-confidenceshine through. "The message is, 'If Ican do it, you can do it,'" says Berg.

Still, the model isn't a quick fix:UTAP's first group of teachers won't graduatefrom college until 2010. It's a longprocess, an enormous financial commitment,and, naturally, a lot of work. A programlike this, says Parks, "can't be justsomeone's pet project. It's got to be adistrictwide initiative."

For reams of resources on charging up the batteries of future educators, check out these additional Web sites: