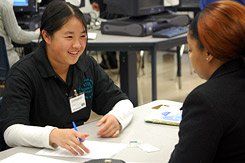 As I approached the entrance to the tax office at San Francisco's Philip Sala and Burton Academic High School on a recent Saturday, I was greeted with professional courtesy. "Would you like to get your taxes done today?" a young woman asked with a smile, pen poised above her appointment book.

Though I explained I was a reporter, there to cover the story and not to do my taxes, I admit I was sorely tempted. After spending a few hours alongside accomplished teenagers who tossed around terms such as "1099" and "Earned Income Tax Credit" with the ease of experts and who navigated those labyrinthine spreadsheets free of charge while their satisfied customers surfed the net, I couldn't help but think I should sign up.

Burton's Academy of Finance has an unusual asset -- its very own Volunteer Income Tax Assistance site. The VITA program, a partnership between the Internal Revenue Service and the nonprofit organization United Way, recruits volunteers to become certified tax preparers as a free service to households earning less than $38,000 a year. VITA sites are scattered across the map, but it's rare to find them at high schools -- and even more rare to find one staffed by the high school students themselves. 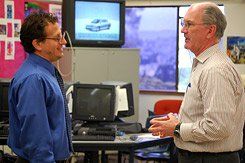 "Here, we let the inmates run the asylum," jokes Patrick Flannery, a former banker who now teaches math and finance at Burton and facilitates the tax office along with colleague Douglas Knight Singer. Flannery and Singer head the Academy of Finance, a two-year program open to juniors and seniors that covers such topics as marketing and business strategy, tax procedure, banking, and credit. The academy accepts students based on an application and an interview and certifies them not only in tax preparation but also in Microsoft Word, Excel, and PowerPoint. The program also helps them obtain relevant summer internships.

Started four years ago by former math teacher Becky Gerek, the tax program still runs with the help of local enrolled agent Ed Sutton, who adds his expertise into the mix by coaching juniors from October through December and giving seniors a refresher during December and January. Both juniors and seniors then take the VITA certification exam in January, as VITA requires its volunteers to be recertified each year.

"Think of the most boring thing in the world -- tax law and procedure," says Flannery with a laugh. "And kids are staying awake! They're doing it!"

Not only are they staying awake, but they're grappling with the ins and outs of basic tax returns, learning about running a small business, working collaboratively in teams on complex problems, building speaking skills and self-confidence, and honing multiple academic fundamentals -- including math, computer, and literacy skills -- all in a real-world, high-stakes context.

"What I love about this process is that it gets kids out of the classroom into a real environment where they can apply what they've learned," explains Singer. "We talk in class about what it means to be professional. We talk about sales tax, interest, and the Earned Income Tax Credit (EITC). But to actually be in an office and assist someone they've never met before, someone who is looking to them as professionals to help prepare their taxes -- all of a sudden, it feels much more real for students."

Adds Flannery, "On a test, there's no real difference between a 75 percent and a 95 percent. But if someone's sitting across from you, and you're talking about their taxes, you want to get 100 percent! You don't want to make any mistakes."

"It's a little nerve-wracking," admits senior Tracy Chen. "You get kind of tense because you don't want to mess anything up by not giving people enough money or giving them too much."

The primary goal of the tax office is to help low-income families in the surrounding community receive the federal EITC and the San Francisco Working Families Credit. These refunds often go undelivered because the people who are eligible are often unaware of them.

"I was really happy to X out the box that says, 'You qualify for EITC,'" adds Chen, who has seen her clients leave the office overjoyed. "You get a really good feeling. I guess that's like your grade."

True, there is no real grade for this part of the program -- it is simply a service the school provides. And each student, having gained the knowledge and the certification, is expected to pull his or her own weight. Judging by the reaction of the clients, the kids run a very tight ship.

"It works out well for everybody, I think," says Randy Johnson, who has been getting his taxes done at the Burton office for three years in a row. "I live two blocks down the street, so I just walk up the hill every year and do my taxes."

"It makes me feel like if the students can do it, I can probably figure out how to do it," says client Danielle Tompkins. "This is a learning experience for me, too."

"I wish there had been some kind of program like this for me when I was in high school," declares returning customer Jessie Nguy as she gestures toward the students she recognizes from previous years. "You can tell that they know what they're doing. They know what kind of credits you need, and they try to help you out any way they can."

The students do it all: They market their services, schedule their hours, greet the clients, get the pertinent information, and enter the returns into VITA's contracted online software, TaxWise, funded by partnering organization KPMG, which helps coordinate Burton's efforts with United Way and other VITA sites. (Support also comes by way of the Patelco Credit Union, donators of those snazzy Burton tax office polo shirts.) Flannery says, "They learn that part of running a small business is doing all of the things that are supplementary," which for some students this season has even meant babysitting a client's rowdy children. Flannery and Singer are present during the whole process, of course, but their presence takes a back burner to the work of the students.

"It's fun to see the seniors help the juniors or the juniors who have already been here help each other," says Singer. "I would rather them take a little bit longer on the return and find out the answer from one another than for them to call me over to explain it for the tenth time." He says the two adults are there mostly to keep them confident: "They've passed the test. They are certified. They just need to trust themselves!"

Many clients who visit the office have limited English skills, so the students also provide translation services in Spanish, Mandarin, Cantonese, and Tagalog. "Believe it or not," remarks Singer, "some of these kids are shy about the fact that they're bilingual." The experience gives them an opportunity to see how invaluable their skills really are in the eyes of both their clients and their peers.

Last year, the program garnered attention from Social Enterprises for Learning (SEfL), an initiative run by the University of California at Berkeley's Center for Cities and Schools. SEfL, along with the Pearson Foundation, the Bay Area Writing Project National, and the National Academy Foundation, is partnering with the San Francisco Unified School District to help facilitate similar school-to-career, community-based projects in multiple school sites across the city. (Click here to see a video produced during the 2007 tax year presenting the program in action.)

SEfL's support has, among other things, encouraged Burton's Academy of Finance students to drill down even deeper into their experience and develop their writing skills by completing related assignments in their English classes. Singer says that this increased level of self-reflection helps them "figure out what they're learning instead of us telling them what they're learning."

According to Flannery, the whole process helps students realize something: "They're capable of going out into the adult world and playing a role." The community comes to think of the school as a resource, while the students begin to see themselves that way as well. This is, Flannery and Singer contend, exactly what a school should be doing.

"It's great to learn skills, but it's even better to apply them to help out your neighbors and give back to the community," Singer says, glancing at a classroom filled with students who have the poise of professionals and who speak with the urgency of those engaged in a very real task, as well as clients who look as though they know they're in capable hands.

When the tax office opens, Singer says with a smile, "they just step up and present their professional side. It's nice to see them really being their best."

The Academy of Finance tax office is located in room 228 at Philip Sala and Burton Academic High School, at 400 Mansell Street, in San Francisco. The office is open on Mondays and Wednesdays from 4 P.M. to 7 P.M. through March 19, 2008, and on Saturday, March 8, from 10 A.M. to 3 P.M. Email burtontaxoffice@gmail.com for appointments. (Walk-ins are subject to availability.)