Mason French is explaining how he and his team are preparing to build an intracampus Web site for the School of Arts and Enterprise (SAE), in Pomona, California. "Maybe we'll choose the account-management system from MySpace, and use the picture function from Flickr, and upload videos the same way YouTube does," French muses.

French is not a professional Web designer. In fact, he's not even old enough to vote. He's a high school senior and a member of SAEmedia.net, one of fourteen class projects the five-year-old School of Arts and Enterprise offers to its students. Along with the other 430 students in this public charter high school, French is acquiring marketable skills through a curriculum founded on project learning. Teachers originally designed and ran all of the school's project classes, which meet daily. This year, however, the students are guiding the process -- not only in deciding what they want to learn but frequently by teaching themselves as well. 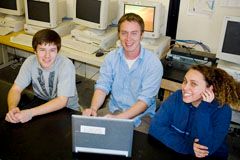 It's still early in the semester, and French and his classmates on the design team are deciding on the look of their intracampus site. The school has a Web site, but the students wanted one of their own that would contain school news, calendar listings, homework assignments, and more.

SAEmedia.net project teacher Eric Edens, a first-year educator, is amazed to find how self-motivated his students are -- even the ones who seemed the least engaged. Edens relates the story about one student, a gang member, who was uninterested in researching the Web site he'd been assigned.

When Edens talked to him one-on-one, the teen said he knew of another site that might serve as a good model for the school's site. The student then brought up the National Football League's home page and explained that the student-created site could organize classes the same way the NFL's home page lists football teams.

"The biggest trick I've found is that kids have to be interested in the project," reports Edens. "It's a matter of helping them, allowing them to study something that they're interested in, but guiding them in such a way that it's productive."

The Right Tool for Every Job

Though the design team determines the look of the site, the development team is making decisions of its own. "We're trying two content-management systems, which is what people use to run their Web sites," explains junior Bridget Henry, who leads the development team. The public school has limited means to purchase often-expensive software, so teachers often look to free open source programs.

The students had narrowed the options down to Drupal and Frog; one of these software packages would be the backbone that helps students organize and manage content. Though both programs offer features such as blogging capabilities and customizable site layouts, the students picked Drupal because it allows for a more intricate and complex Web site.

Once the site is up and running, Edens's students will turn to their sister project class, SAE Media, which is busy churning out content to post on the site. This newspaper team plans on designing its paper using the free software Scribus and will publish a printed version biweekly. When students want to contribute articles to the site, they can use Scribus to easily convert the content to HTML code, which the SAEmedia.net students will then copy and paste onto the site.

The SAEmedia.net team also wants to link to other student-produced content. For instance, the team plans to link to the video team's news shows, which are posted on YouTube. To include student radio shows, the team will convert audio recordings into files in the MP3 format using LAME, an audio encoder, and embed those MP3s on the site using a Flash player. This synergy, reflecting the multifaceted nature of today's media, is a key component of the school's class projects. "Everything intertwines with everything else," notes sophomore Chelsea Brown, one of three student project managers for the SAE Media class.

At the end of the semester, the students hope to have a live, dynamic campus Web site that includes video links, news articles, radio programming, and a host of other features. And if they fall short of that vision, that's OK, too. "It's personal growth that defines the successfulness of a project," says Brown. "It's more about helping us grow and preparing us than having a successful project for the school." Ultimately, the true goal is to produce not perfect products but passionate, self-motivated students.

"The biggest skill they're learning is teaching themselves how to do something, really, because I can't teach all these kids everything," teacher Eric Edens reflects. "So most of what they're doing is going out there and finding resources, learning about them, and implementing them. They're really becoming self-learners, which is probably the best skill they can have."