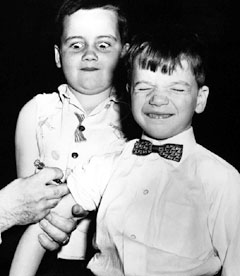 Late last year, Jessie Griffiths took a notarized document into the rural New Hampshire school her three-year-old son Cole attends, stating that, because of religious objections, he was not up-to-date on his vaccines. Later she admitted, "This is not actually the truth."

Cole had suffered a series of seizures days after receiving his measles, mumps, and rubella vaccines that alarmed Griffiths enough for her to stop all future vaccinations. She could have sought a medical note from her son's doctor, but she decided it would be easier just to take the religious exemption that every state except Mississippi and West Virginia allows -- often with no questions asked.

Across the country, a small but growing number of parents are doing the same thing. A 2006 survey from the Journal of the American Medical Association found that the number of parents exempting their children from some or all of their state's required vaccines, for any stated reason, grew by 6 percent per year between 1991 and 2004. All anecdotal evidence suggests their ranks have continued to grow since then.

Certain religious groups, such as the Amish, often choose not to vaccinate, and other people, like Griffiths's son, suffer serious side effects. But health officials believe that many of the parents opting out today are doing so out of fear that the vaccines may contribute to other conditions such as autism, a link long suspected but repeatedly refuted in scientific research.

It's easy to overlook these thousands of parents who opt out of vaccinations for hepatitis A and B, polio, chicken pox, whooping cough, and other illnesses among the millions who vaccinate right on schedule. Indeed, overall immunization coverage has risen steadily across the United States for many years.

But Lance Rodewald, who directs the Immunization Services Division at the federal Centers for Disease Control and Prevention (CDC), says he suspects there are already areas within the country where large numbers of parents taking exemptions have caused compliance to fall below 90 percent, a level generally considered a good measure of "herd immunity." Abstention is especially high in the Western states.

Sandy Cano, school nurse at John Muir Elementary School, in Santa Monica, California, estimates that, because of a high proportion of what she calls "free-to-be-me parents" in the school district, 5 percent or more of the children at her school have not received all their mandated vaccinations (all of them claiming religious exemption). "We try to reassure parents, but parents do their own research," Cano says. "School nurses are always worried."

Worried for good reason, says Rodewald. If parents who opt out of vaccines assume they are putting no one but their own child at risk, the reality is more complex. All vaccines have some small failure rate, meaning certain children who have been immunized against something like measles are still at risk -- a risk that only rises if they are going to school with other potential carriers.

"If a vaccine is 95 percent effective, and you have a lunchroom full of 300 kids, that means fifteen of them are susceptible, even if they have all been vaccinated," says Rodewald. An increasingly mobile society also means more people are traveling to and from developing nations, and the risk rises even more. A 2005 measles outbreak in Indiana began when one young girl who had not been immunized caught the measles during a trip to an orphanage in Romania. About thirty people in the community eventually came down with measles.

"I'm concerned when even one kid isn't vaccinated," says Cindy Lovell, school nurse at Midvale Elementary School, in Madison, Wisconsin. Having read much of the scientific research, Lovell remains convinced the benefits vaccines provide to the public health outweigh any risks.

But more and more parents who are skeptical of that research are turning to groups such as the National Vaccine Information Center, in Vienna, Virginia, which continues to explore possible hazards of vaccines and educates people to make their own decisions. The group's cofounder, Barbara Loe Fisher, argues that our concerns must go beyond the good of the "herd."

"I believe you cannot separate individual health from public health," she says. "We are at a point where one in five children is learning disabled. We cannot say our public health is being served."

Andrea Orr is a freelance writer in San Francisco.