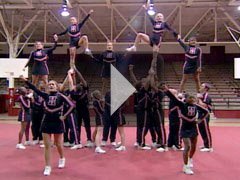 It shouldn't be surprising that the whoops and hollers coming from Karen Levins's U.S. history class sound much like those from the studio audience on television's Who Wants To Be a Millionaire?

These students at Harrison Central High School, in Gulfport, Mississippi, have all the fun of learning history in a game format with interactive remote control devices like those used on TV.

"Which state was the first to give women the vote? Colorado? Wyoming? Massachusetts? Montana?" asks junior Randall Johnson, that day's Regis Philbin. His classmates choose from A, B, C, or D on their bright blue remotes. "Is that your final answer?" Johnson asks.

The answers are recorded on a TV screen and in a computer that Levins later checks to pinpoint student strengths and weaknesses and create a plan to improve the weaknesses. The cheers start when it looks like most of the class chose the correct answer: Wyoming.

Levins then follows up with questions of her own and directs the discussion to a deeper level of the how's and why's of the Wyoming suffragette support.

"Is That Your Final Answer?":

Students use interactive devices during an informal U.S. history quiz.

Levins has posted a sign in her classroom that says, "Try not to have a good time. This is supposed to be educational -- Charles Schulz." But she laughs that students learn more and she enjoys her job more when they are eager to participate. With the interactive-quiz format, they all are clearly engaged.

"It's better than doing pencil work or on the board," says student Alfred Lewis. "It helps you learn because you get everybody involved. It's fun."

"I think we should do this in every class," adds Johnson. "If it's fun, then people want to learn more."

Levins says she has compared test scores when the class has used the remotes, which are known as eclicks, and when they haven't, and the scores are better when they have used them. "I just think when they have something they can put their hands on, and it's a little fun, they tend to remember a little better," she says.

Even when lecturing, Levins involves the students, partly because she remembers how bored she was in school having to sit through lecture after lecture. She uses an overhead transparency that summarizes key concepts of the lecture. Students are assigned to take what are called "guided notes" (which are graded), in which they fill in key words and phrases that are omitted from the transparency.

A Commitment to High Tech

Levins's class is just one of many at Harrison, which was one of four southeastern schools to receive a two-year, $250,000 "Power to Learn" technology grant from the BellSouth Foundation, to take advantage of what technology can do to promote learning.

Throughout the rural, 1,600-student school, with students in grades 10-12, technology is used to accelerate, enhance, or enliven instruction. Charlotte Daves, the Harrison County School District's technology director, has been the leading force in working with teachers to get them excited and knowledgeable about technology and bringing computers and other high tech devices into the classroom.

She especially sees academic progress for many students when they are doing projects using technology that attempt to solve real-world problems.

"When students are asking to participate in classes, when they want to stay after school and work on projects, when they're bringing things from home, when they're meeting you on the weekend to do things on campus, then definitely you made a difference," Daves says.

Examples at Harrison of that engagement abound:

"If they're just doing canned stuff, there's nothing interesting about it, but if they see something that's real, they really pay more attention," says Charlotte Arledge. "It sure makes my job easier when they're interested."

A project on velocity focuses on the student's own movements.

What it doesn't make easier, she notes, is grading. "It's a lot harder to grade those projects than it is to grade a multiple-choice test. And you sit down at 9 o'clock and you'd rather go to bed and you say, 'Why do I do this?' But it's worth it."

Technology Director Charlotte Daves says professional development for teachers -- voluntary professional development -- is essential because tying technology to substantive subject matter is no piece of cake. Neither is learning what computers can do and how to use them, and Harrison takes full advantage of what seems like students' innate mastery of the high tech machines. O'Neal, who is president of Harrison Central's Computer Club, is among the students who take part in Gen Y, a program in which students teach teachers how to use technology, from email to Web sites.

Technology is used to keep track of profits and to maintain menus and grocery lists in a program that trains future restaurant workers.

In both GenY and professional development, the goal is to get the teachers to want the help. "I don't think people should be strong armed into things," says Daves. So she talks to teachers, listens to what they're trying to do, and tries to make a match to an expert (student or professional) or a resource to fit the particular teacher.

In the classroom, the use of all those high tech gadgets may sometimes look like playing, but Daves says they serve a very serious purpose. "We're not playing with toys for the sake of playing with toys," she says. "What we're doing is actually meaningful -- and it's going to make an impact on the people and the population and the community that we're around."

"We can't leave these kids a century behind," adds Graves.