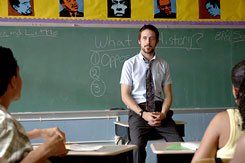 Watching the film Half Nelson, which depicts the relationship between a drug-addicted white teacher and a neglected but resilient black student, probably makes many people uncomfortable. The title (which comes from the wrestling position in which the dominated opponent is stuck but isn't in complete submission) describes the dilemma of the film's characters, but it is also a mirror for viewers. It's never pretty seeing people struggle, and Dan Dunne (Ryan Gosling), Drey (the amazing Shareeka Epps), and many people in their lives seem stuck. Who wants to witness likable people falling apart, doing unlikable things? Who sits comfortably watching a great kid ignored or manipulated by adults, even adults who care for her?

As a teacher with twelve years of experience in the classroom, I probably cringed more than noneducators watching Half Nelson, not just because of predictable inaccuracies (we see Dunne teaching only one fifteen-student class) but also because teachers know how Dunne's self-destruction would impact his students. Yet my strong revulsion came with a flicker of recognition. I think Half Nelson is important. The film hits sensitive nerves about instruction, race, inspiration, and relationships, and though it has incongruities, this is a movie you see not because you know you'll agree with it but because it forces you to examine your ideas.

I watched and discussed Half Nelson with my friends Tanya Friedman and Denise Savoy. Collectively, we've spent forty-plus years in urban public schools. We agreed Half Nelson isn't really a film about teaching. It's certainly not about good teaching (and not just because the deeply flawed Dunne snorts cocaine in the morning and uses crack at school). But I did realize there's something familiar about Dunne nonetheless: He reminds me of my early arrogance, my quick relief in gin and tonics when my first months of teaching saw me stunned by the job's enormity and my inabilities, my colleagues' loss of personal relationships as they poured themselves into teaching. The difference is that, though many of us fell apart (and put ourselves back together) as we began teaching, Dunne is a mess all along.

Some reviews of the film assume or declare that, although Dunne's personal life is careening downward, his teaching is inspired -- he's "brilliant" and "dedicated." But my friends and I had to criticize his classroom performance and worry that noneducators would praise his teaching. What's wrong with Dunne's pedagogy?

Mostly, he doesn't have one. Some viewers might find his renegade approach to the classroom appealing, but he isn't teaching, he's talking. Though he's smart and charismatic, Dunne is wholly unprepared, and we rarely see kids in his classroom involved in learning. Dunne lectures on the theory of dialectics, using examples from seminal moments in political history. However, aside from test taking, an arm-wrestling bout used to bring a point home, and a few odd show-and-tell presentations, kids never do anything in class. We've all known teachers whose charisma and knowledge bring flocks of students to their rooms at lunch, but the end result for many students with personable teachers who are poor instructors is that they lack the skills and knowledge they need to be successful.

Inner city teaching necessarily involves race, and Half Nelson raises plenty of charged issues in that area. In an illuminating scene, Dunne dines with his family, and we learn that, along with his addiction, he's inherited white liberalism. Characters talk through wine-induced hazes, and Dunne both praises his mom's activism and recoils from his dad's racism. We infer that he began teaching to emulate and improve on the activism of his parents' generation. His apartment's bookshelf is full of W. E. B. DuBois and Che Guevara, and two females of color question the collection. Drey asks, "Why do you have all these books about black people?" and his colleague (and object of affection/aggression) asks, "Are you a communist?" Both seem to wonder, "Who do you think you are?" Because Dunne reads about people's struggles without reflecting on his own privilege, and ignores his very real struggle with drugs, he is ultimately ineffective and irresponsible. 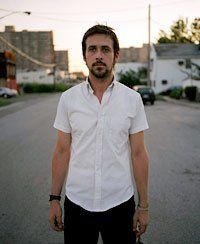 Tanya, Denise, and I agreed that good teachers, regardless of race, actually fight oppression by giving all students the skills they need to learn anything. I got more effective in the classroom when I said to myself, "I don't know what's going on with them, but I do know what they need to know. I care about what's going on with them outside, but I still need to move them forward. I don't know enough about the outside. I can get the resources to help them, but I can't be the only resource." Denise said she found that kids "will respect you if you're trying to get them from here to there." And Tanya talked about the error of the white liberal teacher who says, "The whole machine is broken. School has been so oppressive, so we have to undo their whole experience of school." In fact, she added, people are most oppressed when they have no skills, aren't educated. The machine of school, when it works well, provides skills.

What rings true about Half Nelson is its depiction of relationships -- the dialogue, the silences, the glances and the spaces between characters. Because of the actors' chemistry, I stayed with the film. Dunne has chemistry, if not the teaching chops, with his class, and students delight in his goofy ways ("Holla back if you can hear me," he calls). His strongest connection is with Drey, who is quieter than her peers, less swayed by adult authority. But when Drey finds Dunne cowering in a stall in the girls' bathroom, crack pipe in hand, the first of many boundaries is crossed. The confusion in their roles builds, as Drey wipes his forehead with a paper towel, then allows him to play protector and drive her home. Only when she exits his car does her face show a tinge of disgust and pity.

Just when audiences could forgive Dunne's boundary crossing as he attempts to give Drey attention, he takes things too far. He drives Drey home from school after getting high. When she supposedly loses her key, he takes her to his apartment, not somewhere public. He draws her to the floor at the school dance but gets way, way too close. And though Drey often acts more mature than her teacher, these fuzzy boundaries clearly confuse her. 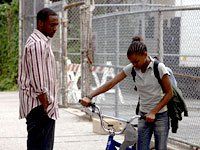 The teacher in me reacts strongly to these scenes. We shouldn't have favorites, but some students' personalities mesh with our own, and chemistry between teacher and class, teacher and student, student and student, can push a strong lesson or motivated student to something magical. Sometimes a student needs that connection to be motivated, to open up to good instruction, and though it belies my professional intentions, I know I've relied on connections with students to motivate me, too.

The film leaves us hopeful for Drey's life, but the onus is on her, alone, to set limits, even to be Dunne's savior. This is a tough way for me to exit the story. For all its work shattering the teacher-hero myth, the film relies on the resiliency-of-children myth, and the film's hopeful ending is a little too Pollyanna-ish, even for this optimistic viewer.

But who among us involved in education, involved in the lives of struggling kids, isn't in a half nelson, stuck between the ideal we're working for and the reality we're in? In the end, Half Nelson is an important cautionary tale, not a story of redemption, pushing us to see that Drey and her classmates everywhere deserve more.

Click here to read an interview with the filmmakers of Half Nelson.