St. Philip's Academy is a private K-8 school inNewark, New Jersey -- by definition, outside thismagazine's usual public school territory. But certainfacts make the school a success story worth studying:St. Philip's is dedicated to serving at-risk students in Newark'sinner city, it is a meritocracy with no set financial requirementfor admission, and it has just moved into an environmentallyforward-looking renovation by the renowned architecturalfirm Gensler.

Now the new home to 330 inner-city students, the schoolis located in a 1920 building that was once a chocolate factory(back when Newark, not Hershey, Pennsylvania, was the cocoacapital of the United States). The Gensler renovation -- a55,000-square-foot facility and new 15,000-square-footgymnasium -- is a near-seamless merging of the architecturalsubstantiality of an earlier industrial age with the light-filled,spatially fluid design of our modern era, along with theincreasingly sophisticated design approaches to sustainabilityand efficient energy use. (The old-to-new building was designedto meet Leadership in Energy and Environmental Designcriteria for sustainability.)

The academy, formerly housed in a much smaller buildingthat had been a bank and an insurance company, is devotedto city students whose academic promise usually exceeds their family's financial situation. So, when a move to a larger facility was decided on, a downtown location was essential. 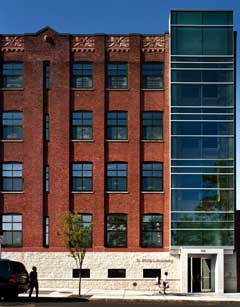 According to Miguel Brito, the school's principal since 2000(St. Philip's was founded in 1988 by the dean of the NewarkEpiscopal Diocese's Trinity and St. Philip's Cathedral), "Welooked at over twenty sites before locating the right building about a mile from our original school. The search was a real challenge for nonprofessionals, but luckily we had friends in Newark real estate."

Finding a site was just the first of the challenges. "Thebuilding had been through many incarnations since its original use as a chocolate factory, and after the 1967 Newark riots, it was abandoned," Brito says. "So it had to be gutted and completely redone."

But not torn down. Ralph Walker, lead Gensler architect onthe four-year project and a specialist in designing educationalfacilities, emphasizes that the idea of demolishing an old building and starting over runs counter to the principle of sustainability and conservation. "To tear down a basically soundstructure is a big waste of materials," he says. "Though renovatingan old, existing building creates certain limitations, thesize and location of the old factory were ideal." Also, Walkerpoints out that the rigorous process of finding the right placegave everyone involved a chance to refine their goals. "AtGensler, we spend a lot of time with a client before we beginactual work on a project," Walker says, "and the process ofeliminating buildings gave us a chance to dig in and understandwhat the expectations for the new school were." 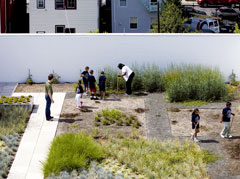 Beyond the initial goal of providing students with morespace for science classes and labs and an all-around largerenvironment (including a full-size gym, which the old schoollacked), the driving expectation was to go green in both structureand spirit. The budget for the renovation was $22 million,much of it raised throughprivate individuals, membersof the church's board oftrustees, and friends andsupporters of St. Philip's."More than just making asustainable building, wewanted to create an environmentin which the studentsare an integral part of theprocess and can learn fromit," Brito says. "For instance,on the roof of the gym, weare putting in a garden with2 feet of soil and someraised beds with 4 feet ofsoil. The kids will growsome of the food that willbe used in the cafeteria,and they'll compost wasteto return to the garden in aclosed-loop food cycle. Thatproject-based study will bepart of our teaching aboutnutrition, wellness, and health."

Ralph Walker says the design brings together the old building with new elements but doesn't attempt to have the newovershadow the old. "We wanted to note the changes, not camouflagethem," he says. "For instance, when we put in acousticalceilings, we placed them between the original wooden beams,which we left unclad and rough. Similarly, the glass 'lantern'that brings natural light into the interior is pulled away fromthe brick face of the building so that it's clearly an add-on." 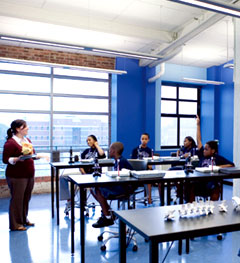 The school continues to be a work in progress. "After wemoved in, some of the construction was still going on, sostudents could get a vivid idea of what the job of buildingentails," Brito says.

Taking a cue from living-history museums such asColonial Williamsburg, Gensler designers are at work on asignage project that will turn the school into a kind of physicalcurriculum. "As an example, those wooden beams willhave signs that will discuss forests, the timber industry, sustainablelogging, even how wood has been used in constructionthrough history," Walker says. "We are working with the sciencefaculty on how various architectural elements could beused for life sciences."

This signage is designated as stage two in the renovation,which Walker hopes will be funded by a new series of grants."We're planning for teachers and students to be able to use thesigns in a kind of scavenger hunt, to encourage them to puttogether a complete narrative, piece by piece," he adds.

"It's been a long run, but there's a certain thrill to the wholeprocess," says Brito. "For all of us, just being in the building isuplifting. If I could have written down the most hopeful scenario,it wouldn't compare to the reality."