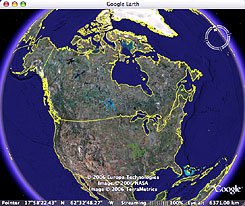 When talking to Diane King, a fifth-grade science teacher at Lakeview Elementary School, in St. Cloud, Florida, it's important to remember that the word go can be deceiving.

"We go to places like Mount St. Helens, so we can see the devastation there," says King, somewhat breathlessly. "We go to the Grand Canyon. We fly over the San Andreas Fault, and you can actually see the fault line. Anything we're learning about, we'll just fly there!"

King is not, as you might think, the beneficiary of the world's most generous field trip budget. She's one of the early adopters of Google Earth, a mapping program that pastes together satellite images from around the world to provide a complete, searchable -- no, visitable -- aerial view of the planet. Google Earth is free, works on both Macs and PCs, and takes only a couple minutes to download from the Google Earth Web site.

With a magnification tool powerful enough to complete one continuous zoom from an altitude of 38,000 miles to as low as 25 feet, and an ever-expanding network of related resources, it's a practically limitless teaching tool -- that is, for schools with the high-speed Internet access and late-model computers they'll need to run the program.

On the most superficial level, Google Earth can help teach students about geography, distance, and topography. Starting from the basic Google Earth interface, students can type in any location on the computer -- the Forbidden City, say -- and watch as the globe spins and then slowly zooms in, in this case, on the Asian continent, eastern China, Beijing, and the walls of the Forbidden City, where individual visitors can be seen clustered around the Imperial Palace.

Scanning Africa at a lazy rotation with the Jane Goodall Institute's layer checked, for example, you might swing by Gombe, in eastern Tanzania. One click later, you're reading Goodall's memories of Fifi, one of the chimpanzee subjects of her groundbreaking research. And, by creating "placemarks," you can jump between your favorite places in seconds.

Given the scale of this technological marvel, you can hardly blame students for starting small. "One of the first things students always do when they go to Google Earth is put in their address and zoom in there," says Aaron Doering, an assistant professor at the University of Minnesota's College of Education and Human Development and a former middle school and high school teacher. "Then they'll zoom out a bit and say, 'Hey, there's a lake there. Remember when I rode my bike there? Oh, there's a Hmong grocery store here and a Thai one here. The east side of St. Paul is a really diverse neighborhood!'"

And that, say teachers, is the beauty of it. Looking at the world with this much scope and detail, it's hard not to notice, for instance, that cities are often nestled in the bends of rivers, or how arid northern Africa is, or that the Hawaiian Islands are just the tips of a vast, underwater volcanic chain.

"It has kids make realizations based on observations they make," says Aidan Chopra, an education program manager at Google, "and that's really the gold standard in education. There are no conclusions in Google Earth; there are trillions of pieces of information out there that students can use to form their own conclusions. A good teacher can then build on those observations and guide them to meet the class's learning objectives."

Almost any academic subject has a connection to geography, Chopra adds. "If I were teaching literature," he says, "I wouldn't just have the students write essays about what they'd read; I would have them create placemarks, maybe make an audiovisual tour of where the events took place, to give them some concreteness. Let's map out Paul Revere's ride. Where did these Civil War battles take place? What distinguished Northern geography from the South?"

For students who don't respond well to verbal information, Google Earth creates a new kind of classwork and problem-solving method. "Say you're doing a section on distance and you're learning miles per hour and systems of measurement," says Chopra.

He continues, "You can give a kid a word problem and say, 'A train went 6 miles in three hours; how fast was it going?' That's one way, but it tends to appeal to kids who have a certain kind of intelligence -- reading, or verbal. Other kids might want to make a diagram. So I might say, 'Go to Paris, and measure the Champs Elysées. Now, find out how long it took Lance Armstrong to do the Tour de France, and then tell me, how long would it take him to get down the Champs Elysées?'"

Last year, Pamela Jamoom, a third-grade teacher at Lakeview Elementary School, wanted to involve her class in a public-service project. She found out about Heifer International, an organization that provides livestock to needy communities, and organized a read-a-thon with her students to raise money. "We were studying Africa and ancient Egypt," says Jamoom, "so we took the students to show them the places we were actually raising money for, the communities that had received the animals."

But not all schools are like Lakeview, which, like every school in the school district, has wireless broadband service, and where two high-speed computers are typically found in each classroom. Google Earth may soon be blowing minds in prosperous districts across the country, but what about everyone else? At what point does a cool new technology give already-privileged kids an even greater leg up on their less fortunate peers?

"I don't think we should look at a new technology as another thing that pushes the digital divide," says Doering, "because if we think that way, we're never going to make any progress." The goal, he says, is to find ways to adapt technology to the existing school system, to find ways to make it work in as many educational contexts as possible.

And when those few precious educational dollars are spent, Doering adds, it's critical to keep looking forward. "Where should we invest our money?" he asks. "Should we invest it in textbooks, so that students will have access to outdated information a year from now? We need to invest in what is going to provide students with the tools that they will need in the future. And we need to invest in pedagogy to enable teachers to use them."

Google Earth
Here's where you can download Google Earth and find out more about its capabilities.

Google Earth Blog
The place to find out about the latest layers and ways to connect current events with Google Earth.

Google Earth Resources for Geography Teachers
A wealth of Web sites that will help enrich the Google Earth experience for you and your students, plus handy tips.

SketchUp
SketchUp, another new, classroom-friendly (and free) application from Google, allows students to make three-dimensional models and, in combination with Google Earth, explore the world in 3-D.