"Wipe your feet," says Miss Hazel Haley. The Lakeland High School teacher, who turns ninety in November and began teaching when FDR was president, greets her seniors as they stroll into room 106, the same class she's been working in since 1952. "The rug gets darker as it gets dirtier," she explains, "but I still say, 'Wipe your feet' so it lasts longer."

The care and concern Haley displays reflects her lifelong tenure as a teacher. Three generations of students in Polk County, Florida -- including current Lakeland mayor Buddy Fletcher and the late governor Lawton Chiles -- have shuffled into her ninety-minute Honors English class to learn the lessons of Beowulf and Macbeth. She has taught the parents, even the grandparents, of some of her students. 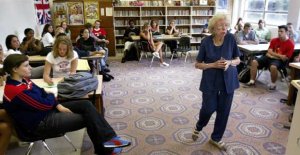 But Haley, the longest-serving active teacher in the state, and perhaps the country, leads her last class this spring, ending a sixty-nine-year teaching career spent almost entirely at Lakeland, where she received her diploma in 1933.

She never married or had children, and considers the students her family. Haley's classroom is homey, filled with area rugs, overgrown houseplants, and thousands of books. She makes sure her students not only leave high school versed in writing and English literature but also "come away with a great deal of self-knowledge," says fellow English teacher Allen Cleveland. "She has had a huge impact on the community."

Haley seems bemused in her role as "the Ultimate School Matriarch," as she calls herself. But as part of her farewell tour, she offers five tips for achieving longevity in the classroom:

"Follow this little bit of advice," she says, "and you will find that classroom a joy every day."